U.S. sailor Elgin Staples survived the 1942 sinking of the USS Astoria in a life belt that that his mother made.

In August 2021, many internet users were introduced to the incredible story behind the rescue of U.S. Navy Seaman Elgin Staples after the sinking of the USS Astoria during World War II via a viral Facebook post. On August 9, 1942, Navy Signalman 3rd Class Elgin Staples was aboard USS Astoria (off the coast of Guadalcanal) when the ship was attacked by Japanese cruisers. The attack provoked devastating explosions. Wounded, and surrounded by water coming from every direction, Elgin quickly grabbed his inflatable rubber lifebelt and strapped it on. More than 200 crewmen died in the attack and sinking of USS Astoria, but thanks to his lifebelt, Elgin survived. He was later rescued by the destroyer USS Bagley. Shortly after, Elgin closely examined the lifebelt that had saved him, and was surprised to see that it had been manufactured in his hometown of Akron, Ohio, by the Firestone Tire and Rubber Company. He also noticed an inspector number on the label. When Elgin returned to Akron, he told his mom about that terrible night, and she informed him that while he was overseas, she had taken a wartime job at the Firestone plant. Stunned, Elgin quickly took out the lifebelt from his duffel bag and said: “Take a look at that mom, It was made right here in Akron, at your plant”. After reading the label, she looked at Elgin with tears in her eyes, and said: “Son, I’m an inspector at Firestone. This is my inspector number”. Without saying another word, mother and son fell into each other’s arms.

This story, incredibly, is largely accurate. Staples was aboard the USS Astoria when it sank during the Battle of Savo Island, and he survived, in part, because of a life belt that was manufactured at the Firestone Tire and Rubber Company plant where his mother, Vera Mueller-Staples, worked. While it is very likely that Mueller-Staples had a hand in manufacturing the specific belt that saved her son’s life, we have not been able to independently verify this.

Staples was truly aboard the U.S.S. Astoria when it was struck by torpedoes and sank during the Battle of Savo Island. More than 200 Navy men went down with the ship, but Staples survived, thanks in part to his life belt and the careful aim of his countrymen.

Staples was quoted in an October 1942 news article from the United Press:

“There was a ship nearby, and I thought she was an enemy ship. She kept shooting all around us. She turned her searchlight full on me, and boy, I was scared to death. I thought sure they’d pick me off. It wasn’t until later I learned she was a friendly ship and was shooting the sharks away from us.”

The life belt Staples wore while he awaited rescue was truly made in the plant where his mother worked. However, the earliest versions of this story did not say that Mueller-Staples had a personal hand in the life belt’s manufacture. In fact, in October 1942, Mueller-Staples herself said that there was a “one in three” chance that she personally inspected the belt.

Elgin (Chick) Staples, 19-year-old signalman for the Navy who has seen so much battle action that he talks about sudden death as casually as a sandlot baseball game back home in Akron, Ohio, said today his mother may have saved his life.

When Staples was blown off his ship, the U.S.S. Astoria, one of the three American cruisers sunk in the Solomon Islands fighting, he inflated a lifebelt which may have been inspected by his mother who is employed in an Akron rubber plant.

One Chance in Three.

Chances are one to three I inspected it,” said Mrs. Vera Mueller of Akron, who accompanied her son on the visit to New York. “I am one of three inspectors in the lifebelt division, you see, so it’s possible his belt went through my hands.”

Other articles from the time also reported that Staples was saved by the “type of belt made” by his mother in the Akron factory. Here’s a newspaper clipping from December 1942 that shows Mueller-Staples and six other women who were honored for their work to support the war effort: 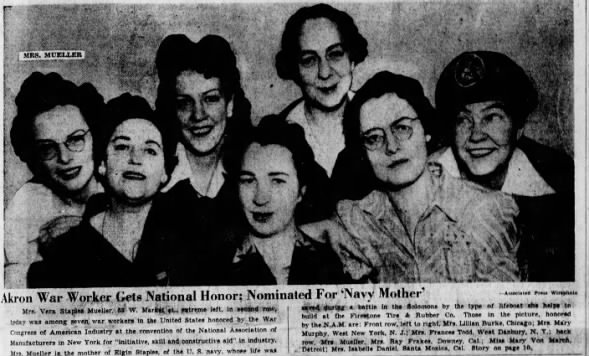 It’s unclear if this story was embellished over the years, or if it was later found that Mueller-Staples truly had inspected the very life belt worn by her son. In either case, the viral version of this story that circulated on Facebook is supported by Staples himself.

Staples wrote a story entitled “Against All Odds” for the book “Chicken Soup for the Veteran’s Soul: Stories to Stir the Pride and Honor the Courage of Our Veterans.” Staples’ version of the story mirrors the text that was circulated on Facebook. He wrote:

When I finally took my thirty-day leave, I went home to my family in Ohio. After a quietly emotional welcome, I sat with my mother in our kitchen, telling her about my recent ordeal and hearing what had happened at home since I went away.

My mother informed me that “to do her part,” she had taken a wartime job at the Firestone plant. Surprised, I jumped up and grabbed my life belt from my duffel bag, putting it o the table in front of her.  “Take a look at that, mom,” I said. “It was made right here in Akron at your plant.”

She leaned forward and, taking the rubber belt in her hands, she read the label. She had just heard the story and knew that in the darkness of that terrible night, it was this one piece of rubber that saved my life.  When she looked up at me, her mouth and her eyes were open wide with surprise. “Son, I’m an inspector at Firestone. This is my inspector number,” she said, her voice hardly above a whisper.

We started at each other too stunned to speak. Then I stood up, walked around the table and puller her up from her chair. We held each other in a tight embrace, saying nothing. My mother was not a demonstrative woman, but the significance of this amazing coincidence overcame her unusual reserve. We hugged each other for a long, long time, feeling the bond between us. My mother had put her arms halfway around the world to save me.

Canfield, Jack, and Mark Victor Hansen. Chicken Soup for the Veteran’s Soul: Stories to Stir the Pride and Honor the Courage of Our Veterans. Simon and Schuster, 2012.