Is this the real thing, the product of digital trickery, or something else? 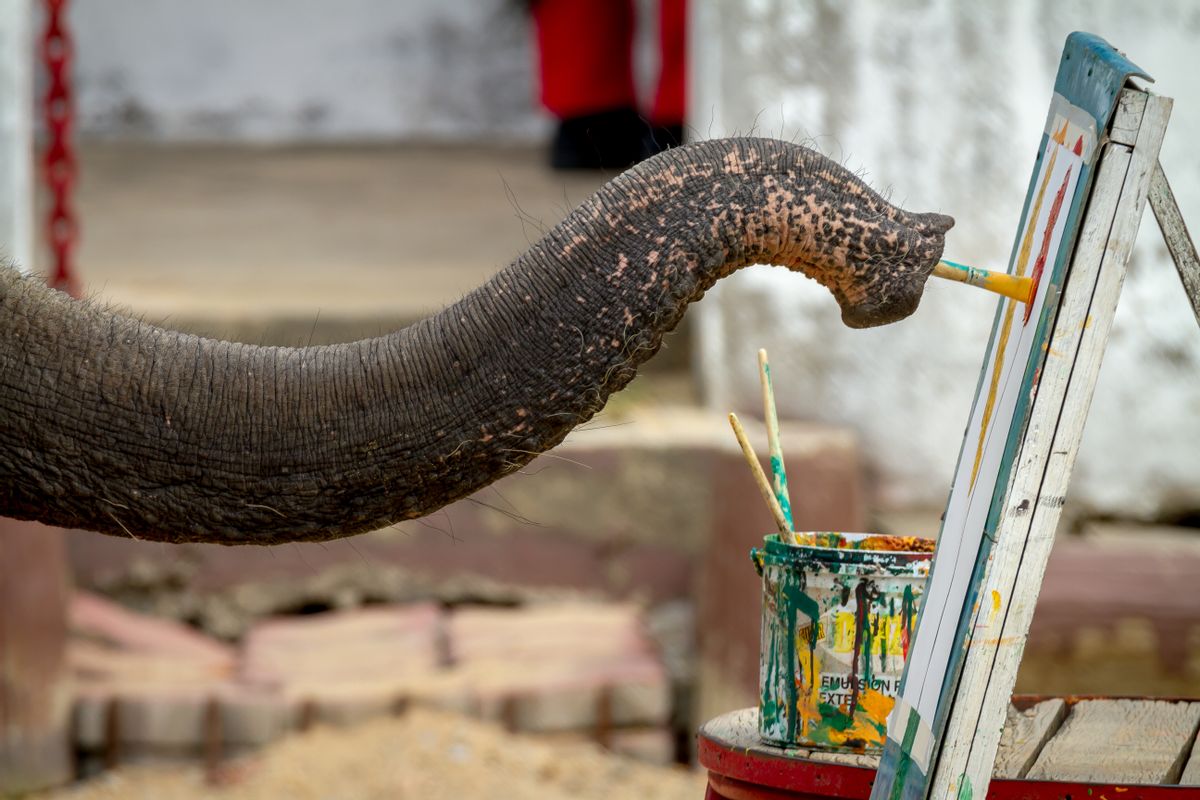 Claim:
Video clip shows an elephant painting a picture of an elephant.
Rating:

The video seen above is "true" in the basic sense that it captures the real phenomenon of elephants who perform the physical process of creating drawings by holding brushes in their trunks and applying them to cards mounted on easels. A BBC News article described an exhibition of such paintings at an Edinburgh gallery in 1996:

Pictures which were painted by elephants have gone on display at an Edinburgh gallery.

Art graduate Victoria Khunapramot, 26, has brought the paintings from Thailand to the Dundas Gallery on Dundas Street.

They include "self-portraits" by Paya, who is said to be the only elephant to have mastered his own likeness.

Paya is one of six elephants whose keepers have taught them how to hold a paintbrush in their trunks. They drop the brush when they want a new colour.

Mrs Khunapramot, from Newington, said: "Many people cannot believe that an elephant is capable of producing any kind of artwork, never mind a self-portrait.

"But they are very intelligent animals and create the entire paintings with great gusto and concentration within just five or 10 minutes — the only thing they cannot do on their own is pick up a paintbrush, so it gets handed to them.

"They are trained by artists who fine-tune their skills, and they paint in front of an audience in their conservation village, leaving no one in any doubt that they are authentic elephant creations."

Mrs Khunapramot, who set up the Thai Fine Art company after studying the history of art in St Andrews and business management at Edinburgh's Napier University, said it took about a month to train the animals to paint.

The web site of the Asian Elephant Art and Conservation Project explains the background behind elephants' being taught to paint, with the resulting artworks being sold and the monies so raised being used to fund elephant conservation projects. The site includes a video gallery that features several clips of pachyderm artists in action similar to the one linked above, as well as galleries displaying the individual elephants' works. (Based on the similarity of drawings, we'd guess that the elephant shown in the example video is Hong, a nine-year-old female living at the Maetaman Elephant Camp in Thailand.)

However, although these animals may be creating artworks in a purely physical sense, critics contend that the elephants participating in this activity are not actually "painting" in any meaningful sense of the word: They aren't engaging in any form of creativity, much less abstractly making free-form portraits of whatever tickles their pachydermic fancies at the moment; rather, they're simply actors performing in tourist trap attractions in Thailand, where they do nothing more than outline and color specific drawings they've been painstakingly trained to replicate — and they manage that much only while receiving a good deal of prompting and guidance throughout the process from their mahout (trainers).

As zoologist Desmond Morris wrote after he and scientist Richard Dawkins traveled to Thailand in 2008 to investigate the "elephant painting" phenomenon:

So are these endearing mammals truly artistic? The answer, as politicians are fond of saying, is yes and no.

Let me describe exactly what happens. A painting session begins with three heavy easels being wheeled into position. On each easel a large piece of white card (30in x 20in) has been fixed underneath a strong wooden frame.

Each elephant is positioned in front of her easel and is given a brush loaded with paint by her mahout. He pushes the brush gently into the end of her trunk.

The man then stands to one side of his animal's neck and watches intently as the brush starts to make lines on the card. Then the empty brush is replaced by another loaded one, and the painting continues until the picture is complete.

The elephant then turns towards its audience, bows deeply and is rewarded with bananas.

The paintings are then removed from their frames and offered for sale. They are quickly snapped up by people who have been astonished by what they have just witnessed.

To most of the members of the audience, what they have seen appears to be almost miraculous. Elephants must surely be almost human in intelligence if they can paint pictures of flowers and trees in this way. What the audience overlooks are the actions of the mahouts as their animals are at work.

This oversight is understandable because it is difficult to drag your eyes away from the brushes that are making the lines and spots. However, if you do so, you will notice that, with each mark, the mahout tugs at his elephant's ear.

He nudges it up and down to get the animal to make a vertical line, or pulls it sideways to get a horizontal one. To encourage spots and blobs he tugs the ear forward, towards the canvas. So, very sadly, the design the elephant is making is not hers but his. There is no elephantine invention, no creativity, just slavish copying.

Investigating further, after the show is over, it emerges that each of the so-called artistic animals always produces exactly the same image, time after time, day after day, and week after week. Mook always paints a bunch of flowers, Christmas always does a tree, and Pimtong a climbing plant. Each elephant works to a set routine, guided by her master.

The following video clip reveals something of how much an elephant is actually guided by its mahout during the painting process:

Other critics, such as One Green Planet's Kate Good, contend that not only is the elephant painting phenomenon a misleading show put on to garner money from tourists, but that the animals who participate in it have been abused; therefore, visitors to Thailand should shun the purchase of such works and avoid sharing videos in which the abuse can be seen.