Did an Elephant Jump out of a Suspension Rail Car?

No word if the elephant had to pay extra for trunk space. 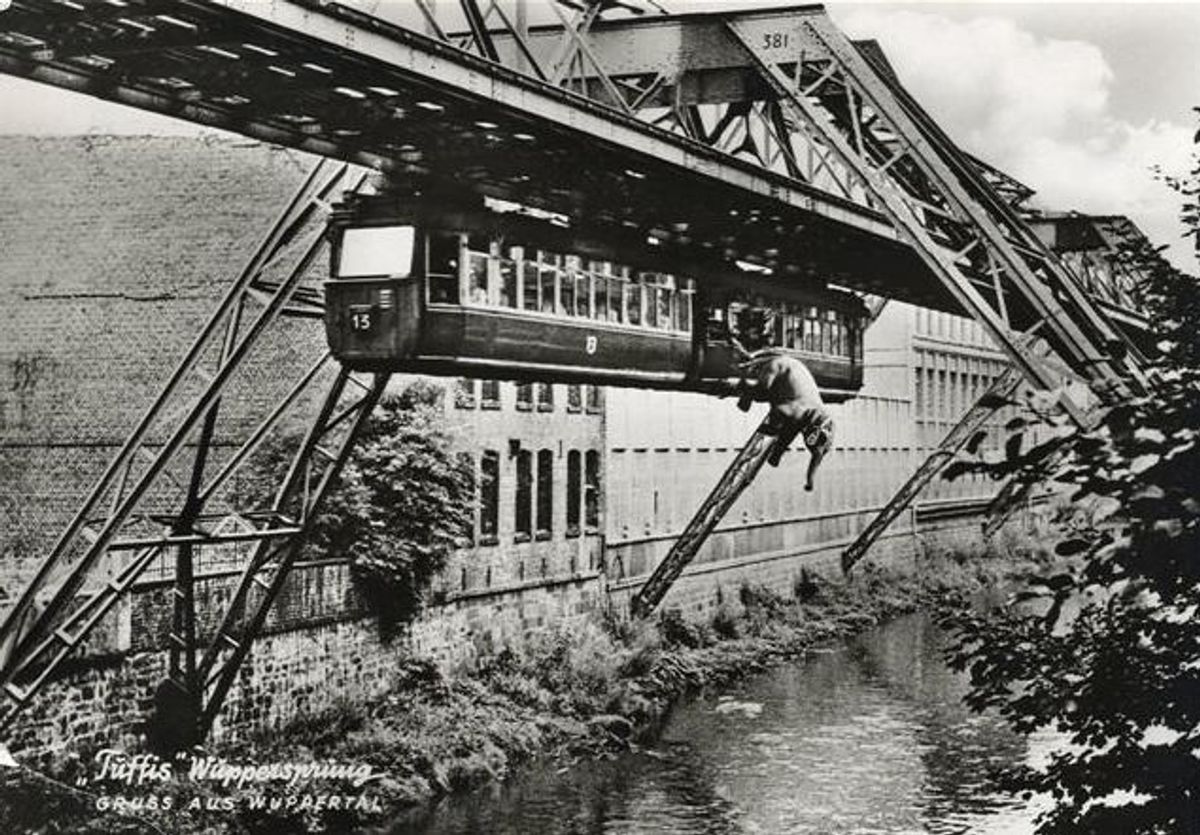 Claim:
A photograph shows an elephant jumping out of a suspension rail car as it crossed a river.
Rating:

In July 1950, a circus elephant named Tuffi was brought aboard a suspension railcar in Wuppertal, Germany, for a promotional event that ended when the elephant charged through the doors and fell into the river. While a viral image documents what this scene may have looked like, it is a photomontage, not a genuine photograph.

In January 2022, an image supposedly showing an elephant jumping out of a monorail above a river was posted to the r/OldSchoolCool section of Reddit along with the caption: "Elephant jumped out of public Transport, Wuppertal, Germany 1950." This is not a genuine photograph of an elephant jumping (or falling) out of a rail car. However, an elephant really did jump/fall from a rail car and this image, a photomontage, shows what that incident may have looked like.

In July 1950, Franz Althoff, head of the Circus Althoff, scheduled a promotional event that involved one of his circus animals, a young elephant named Tuffi, and the Wuppertal Schwebebahn, a suspension railway in the German city of Wuppertal. The plan was to simply take photographs of the elephant riding in the railcar, but Tuffi got scared, barged through the doors, and fell into the river.

First, the elephant just barely fits through the narrow door of the suspension railway, then significantly more photographers and onlookers crowd into the car than had been agreed. After all, nobody wants to miss the spectacle when an elephant hovers over the Wupper for the first time. The doors close, the train starts to move, squeaking and rocking.

It quickly becomes clear: all this is too much for the elephant cow. "It was the fault of the journalists. They all wanted to take the best photo on the suspension railway," remembers Althoff's son Harry, who took part in the suspension railway journey when he was twelve, in an interview with the "Westdeutsche Zeitung" in 2005. A contemporary witness later reported: "The conductor was very excited and kept shouting: 'Keep calm! Keep calm!'" The crowd was so big that Tuffi wanted to turn around to see what was going on behind her, suspects Harry Althoff. Bad memories probably came up in the animal: "As a little elephant, she was in a box when she was being transported from Asia and knew that she had to follow the light to get out."

The light can be seen behind the window panes, Tuffi climbs onto a bench - and it collapses under the elephant. Then everything happens very quickly: Tuffi runs twice, violently breaks through the window and outer wall on the left side of the track and falls about ten meters deep into the Wupper, just a few hundred meters behind the boarding stop. What remains is a demolished suspension railway carriage, several injured journalists and a destroyed camera.

While a number of reporters and photographers were at the event, and while these photographers managed to capture pictures of Tuffi "purchasing" a ticket and standing on the platform awaiting the train, none managed to snap a picture of the elephant during the chaos. The above-displayed image was created after the fact to commemorate the event. It is a photomontage (a composite of multiple images), not a genuine photograph, that was created for a postcard to commemorate the incident.

Here's a newspaper clipping that was published in the Arizona Star in November 1950. 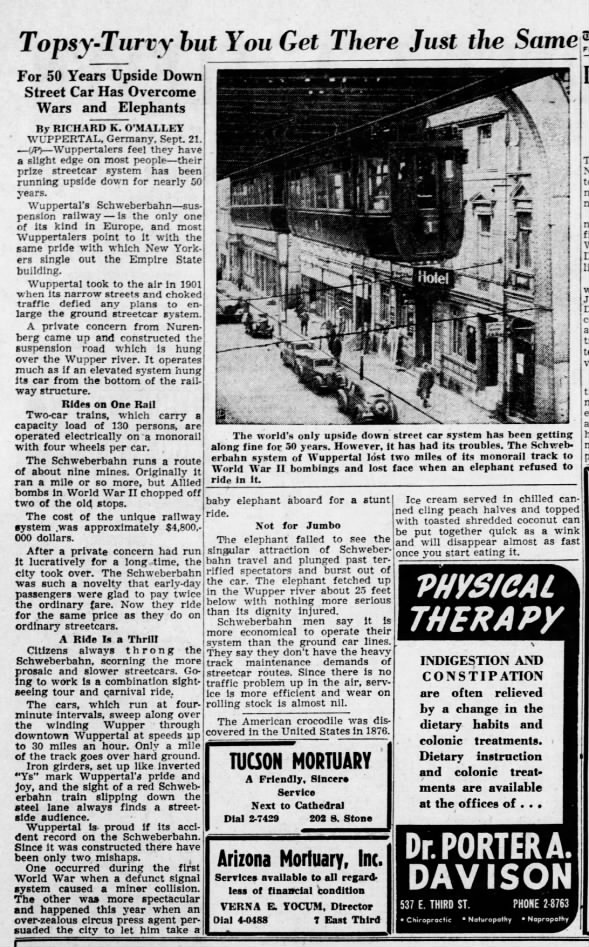 Other than a few scratches, Tuffi was relatively unharmed during the incident.