Here's how we solved the mystery of what this viral video truly showed. 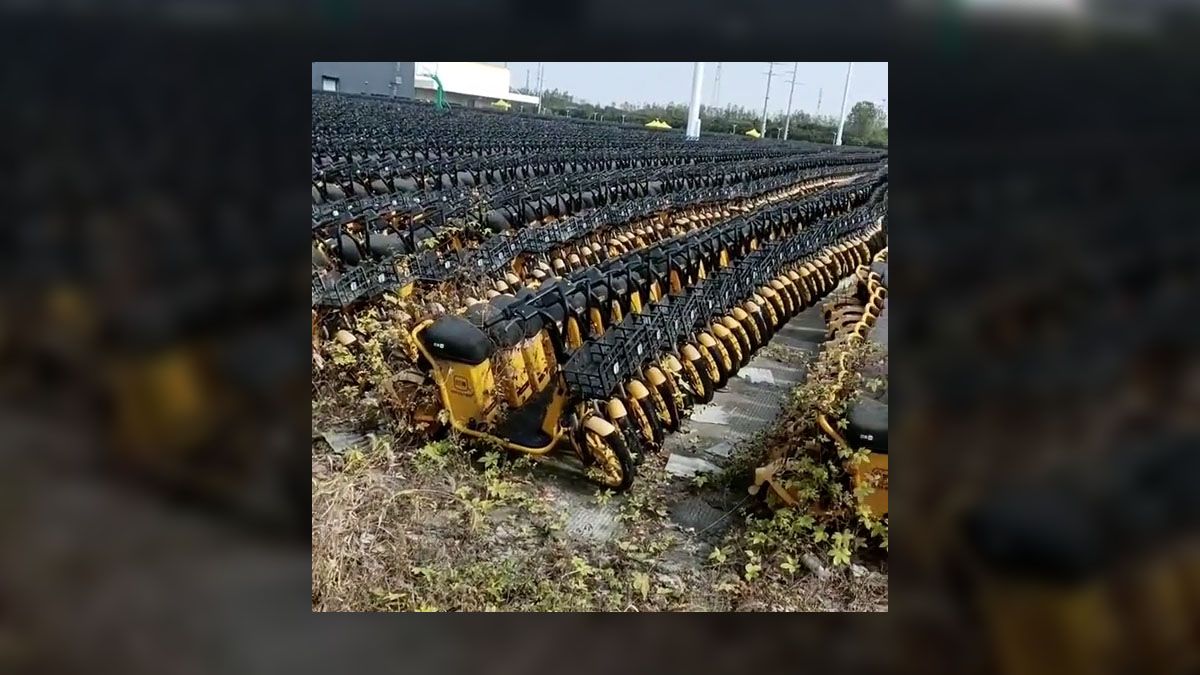 Claim:
A video shows a sea of lined-up electric scooter bikes that were abandoned because of the high cost of EV battery replacement.
Rating:

On Nov. 28, 2022, the @Xx17965797N Twitter account tweeted a video with a misleading caption that claimed the clip showed a sea of lined-up electric scooter bikes that were abandoned because of the high cost of electric vehicle (EV) battery replacement. The tweet read, "Electric green scooters that have reached end of battery life. Due to the batteries being so expensive to replace, electric scooters are abandoned because disposing of them any other way is dangerous and expensive."

This was not true, despite the tens of thousands of combined retweets and likes that the tweet received. 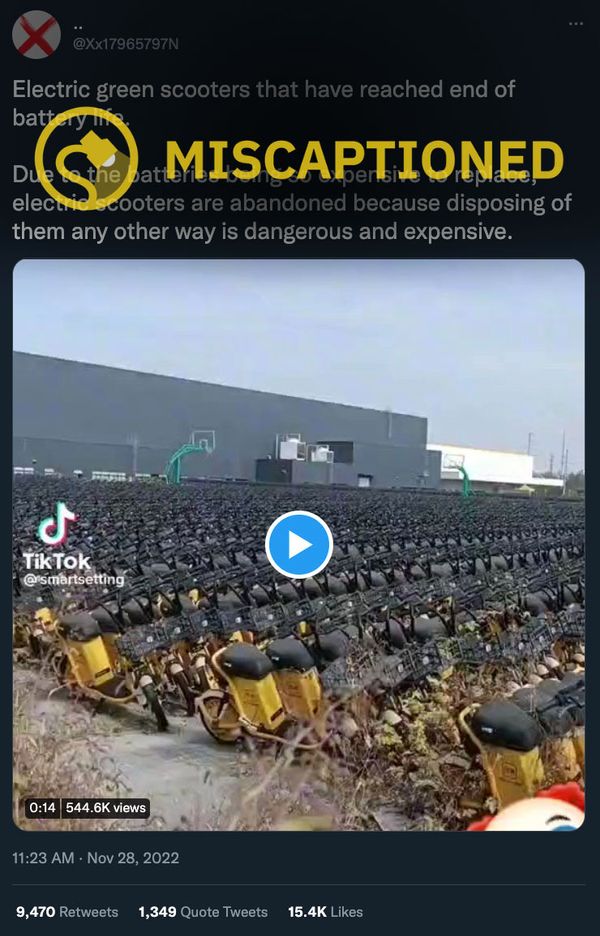 The same video upload from @Xx17965797N was also misleadingly reshared by accounts including @PeterDClack, @JamesMelville, and @MillerForTexas. The former two tweets received thousands of engagements, despite the fact that the information pushed in the original tweet was not true.

In cases like these where a caption is incorrect but the picture or video is real, we issue a fact-check rating of "Miscaptioned."

The Origins of the Video

Days before the @Xx17965797N tweet was posted, the @ElevaBrasilES account also misleadingly tweeted that the same video was shot in France. The tweet went up on Nov. 21 with an incorrect caption that read, "Green energy… Cemetery of electric motorcycles in France. Now designated as a 'biohazard zone.'" (Note: This mention of France reminded us of other rumors we've debunked in the past, in particular about two photos of other car graveyards. The two pictures showed false captions that claimed the cars had been abandoned due to the high cost of battery replacement, just like the video we're looking at in this fact check.)

The oldest upload of the video that we could find came from TikTok user @smartsetting. The video was uploaded on Nov. 7 and by the end of the month had received nearly 5 million views.

Based on watching the video, the scooters appeared to be parked in a parking lot near a basketball court, perhaps in a university complex or public park. Several blurry Chinese characters were visible on the side of the bikes. At the end of the clip, a tall building could be seen on the right-hand side of the frame. Other than those pieces of information, we didn't have much to go on.

How We Researched the Rumor

In order to find the truth behind this video, we first used Adobe Media Encoder to export a JPEG file for each and every frame from the video. The results of this export were 440 individual images from the 14-second video. We then performed numerous reverse image searches with these picture files using Google Images and TinEye.com. These reverse image searches provided several clues as to where other users had reposted the video. However, we did not find any further details from these searches.

Next, we tried several searches on Google, Twitter, and YouTube with phrases such as "electric scooter China" and "electric bike graveyard China," among other terms. This helped to find several reposts of the video. The searches also showed results for many of the sites in China that are the final resting places for massive stacks of bicycles dumped by bike-sharing companies with failed business models. Perhaps the most striking video we found was titled, "No Place To Place——The Wonders of Shared Bicycle Graveyards in China."

At one point in our research, we stumbled upon an AFP video from 2021 that appeared to show the same yellow color and model of electric scooter bike. The caption for the clip said that it was captured "outside the city of Shenyang." The end of the video showed a stadium with special colors for seating zones.

After an exhaustive search, we were able to find this same stadium by using the map tools on the Chinese website Baidu.com. Unlike Google Maps, Baidu.com has street-level views of nearby roads. However, this part of our effort wasn't very helpful. It remained unclear if this was the same location where the viral clip was shot.

In the end, it was going back to TikTok that helped us find the origins of the video. A search on TikTok for "electric share bike China" brought us to this video from @evstevepan. The video showed the same kind of yellow electric scooter bike with a similar logo. A scan of the logo using a mobile phone camera and Google Translate revealed the company name Meituan, which is known as an "all-encompassing platform for local services."

The logos appeared to be similar. (Courtesy: @smartsetting/@evstevepan on TikTok)

We then searched the internet for Meituan and electric scooters, which produced plenty of pictures on Shutterstock.com. For a moment, the two large characters on the side of the scooter didn't seem to match those from the viral video. We then horizontally flipped a still-frame from the viral video, which led us to discover that it had been mirrored, meaning that all words and numbers were backward. 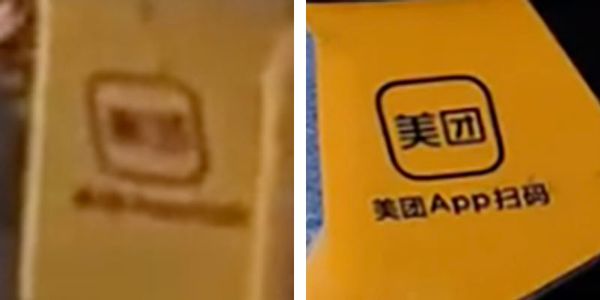 It's blurry, but it's a match. "App" appears on the left, too. (Courtesy: @smartsetting/@evstevepan on TikTok)

All of these developments in our research led us to news articles that helped to show our findings were lining up.

Meituan 'Walked Away' from Bike-Sharing

In April 2018, news broke that Meituan had purchased the company Mobike for $2.7 billion. According to the story, Mobike is "a Chinese startup that helped pioneer bike-sharing services worldwide."

But by November of that same year, TechCrunch reported that Meituan would be "[walking] away from bike-sharing and ride-hailing," as there wasn't enough demand from customers for the supply of its bike-sharing venture:

In April, Meituan entered the bike-sharing fray after it scooped up top player Mobike for $2.7 billion to face off Alibaba-backed Ofo. Over the past few years, Mobike and Ofo were burning through large sums of investor money in a bid to win users from subsidized rides, but both have shown signs of softening their stance recently.

Mobike is downsizing its fleets to "avoid an oversupply" as the bike-sharing market falters, Meituan's chief financial officer Chen Shaohui said during the earnings call. Ofo has also scaled back by closing down many of its international operations.

During its third quarter that ended September 30, Meituan posted a 97.2 percent jump on revenues to 19.1 billion yuan, or $2.75 billion, on the back of strong growth in food delivery transactions. The firm's investments in new initiatives – including ride-hailing and bike-sharing – took a toll as operating losses nearly tripled to 3.45 billion yuan compared to a year ago. Meituan shares plunged as much as 14 percent on Friday, the most since its spectacular listing.

Just as so many electric bicycles from bike-sharing companies had piled up across China, so had electric scooters like the ones seen in the viral video.

In sum, social media users falsely claimed that a video showed tons of lined-up electric scooter bikes that were abandoned in a "graveyard" due to the high cost of EV battery replacement. All evidence pointed to a simple answer: supply and demand. The number of electric scooter bikes and bicycles far outnumbered the number of people who requested to use them (or else they went missing or were stolen), which resulted in downsizing by some companies, and the closure of others. The clip appears to have been shot in China, although its precise location is unclear.

We reached out to Meituan for comment on Nov. 29 but did not receive a response in time for publication.

"Graveyard of the Bikes: China's Failed Share-Cycle Scheme from Above." Techxplore.com via AFP, 21 Apr. 2021, https://techxplore.com/news/2021-04-graveyard-bikes-china-share-cycle-scheme.html.

u/silvertomars. "A Graveyard for Electric Scooters… the Batteries Have Reached the End of Their Life-Time, but Are Too Expensive to Replace… and Safely Disposing or Recycling the Batteries Is Also Too Expensive…." r/Wallstreetsilver via Reddit.com, 28 Nov. 2022, https://www.reddit.com/r/Wallstreetsilver/comments/z7i7ng/a_graveyard_for_electric_scooters_the_batteries/.