Was an 'Elderly Man' Beaten While Trying to Help a 'Man in a Sundress' in Portland?

An image of an older man with a bloody face was widely shared, but video shows he was an aggressor in a brawl. 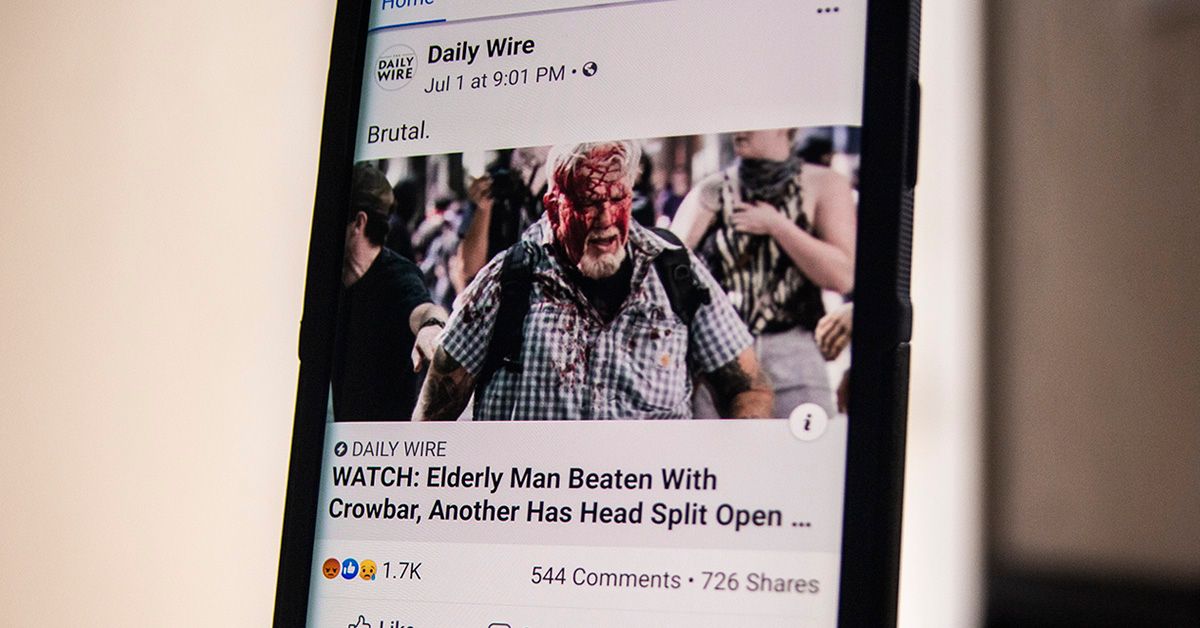 Claim:
An "elderly man" was beaten while trying to protect a sundress-wearing man from being attacked.
Rating:

An older man identified as John Blum was hit in the head, causing him to bleed, during a street brawl at a rally in Portland.

Blum was not simply trying to help someone — video shows he was charging at people with a baton and fighting with anti-fascist demonstrators.

Misinformation spread on the internet in the wake of a rally in Portland, Oregon, where far-right protesters clashed with counter-demonstrators — violence that has become a reoccurring feature of the political landscape in the Pacific Northwest.

The far-right groups, Patriot Prayer and "Him Too," held demonstrations on June 29, 2019, in downtown Portland and were met by counter-protesters, including black-clad anti-fascists. As they have in the past, the events devolved into a series of street brawls. Three people were arrested and eight people were injured, including three who were sent to the hospital, according to police.

Right-leaning social media personalities and websites widely circulated an image of a bearded man with blood covering his face, identifying him as John Blum and reporting that Blum was the victim of a brutal attack by "antifa criminals." Partisan media and a single picture didn't tell the full story, though.

WATCH: Elderly Man Beaten With Crowbar, Another Has Head Split Open By Antifa While Trying To Help 'Gay Man In Sundress' https://t.co/slRy6Nzajm

Blum was hit in the head by a black-clad protester, and that injury caused bleeding. But after a widely shared narrative that he was heroically trying to help someone emerged, so did video showing that Blum (wearing a fedora hat) was both carrying a baton and proactively engaged in a fight.

Another view of #JohnBlum with a #baton, choosing to charge and swing baton rather than disengage. You can also see that #antifa and counterprotesters attempting to stop the fighting #milkshakes #NoPrideforProudBoys pic.twitter.com/822aMATOt5

After the brawl dies down (video above) the little dude that got thrown and bounced off the pavement came back and punched the guy. #PatriotPrayer attendees engage again, that is when the old dude goes after two #antifa with a baton. Then he gets cracked in the head #Milkshake pic.twitter.com/OiwI8VGSvi

John Blum, the older man that was bloodied and had his picture go viral, is here in this video before the brawl broke out holding his baton. A black man was able to deescalate a stand off between John and #antifa & other counter protesters. #Milkshake #NoPrideforProudBoys pic.twitter.com/yomI2759Bp

The man who shot the videos asked us to use only his first name, John, because of harassment directed at journalists who covered the event. John told us that in the chaos that has periodically roiled Portland since the election of President Donald Trump, some people show up specifically to fight, and the late-June protests were no different. Blum had swung his baton at people before getting hit over the head himself.

"It was just really chaotic," John told us. "There was a point where things had calmed down, and then someone threw one more punch, and it turned into another little scuffle. That’s when the older gentleman (Blum) came at people who weren't attacking him, I think two different people in the black bloc. Someone responded by hitting him in the head [from behind]."

John, who identifies himself as an independent media worker sympathetic to the anti-fascists' cause, said that a sundress-wearing protester was attacked, but Blum was not part of that altercation. "It’s really kind of nuanced and mixed up. The idea that John Blum was sticking up for this guy [in a sundress] is inaccurate, but there was an attempted attack on [the person in the sundress]. John Blum was not part of that confrontation."

He added, "The idea that he’s some senior-citizen guy — yeah he’s obviously older, but that guy got around. He had no problem getting down. He didn't look like he was super-fit, but he definitely had no problem trying to take on younger people."

The Twitter account that originally shared a video purporting to show Blum being beaten has been suspended by the platform, though we are unsure why. We were also unable to locate Blum online for comment.

The misleading victim framework that spread across the right-leaning media ecosystem is no surprise, said Stanislav Vysotsky, an assistant professor of sociology and criminology at the University of Wisconsin at Whitewater who has been researching political violence in Portland. Citing the work of sociologist Mitch Berbrier, Vysotsky told us the "victim" narrative is an established framing technique used on the far right.

"There is already a master narrative on the far right that they are victims, victims of people of color, of Jewish conspiracies, feminists, all these things, so it’s very easy once you have this framework to paint yourself as a victim of left-wing thugs," he told us.

Reality is more complicated, however. He places the most significant starting point for political violence in Portland with a June 4, 2017, "free speech" rally planned by right-wing Patriot Prayer founder Joey Gibson one week after two men were fatally stabbed on a Portland train by a white supremacist. The men had been trying to intervene as that white supremacist, identified as Jeremy Christian, berated two Muslim passengers. The rally was scheduled despite the revelation that Christian had attended a Patriot Prayer event, raising tensions.

Since then, multiple incidents have contributed to an overall escalation of violence at various events staged by far-right activists, which draw opposition from counter-demonstrators, including anti-fascists. On May 1, 2019, members of the Patriot Prayer group showed up at Cider Riot, a bar in Portland known to have left-leaning activists as patrons, and sprayed customers with mace, initiating a street fight. One member of Gibson's group hit a woman with a baton, fracturing a vertebrae, according a lawsuit filed by the bar.

Also in 2017, Vysotsky said, the far-right adopted a new tactic of holding political events in liberal strongholds like Seattle and Portland to deliberately provoke a response. "That was a shift in the politics of the far right, and this influence of the alt-right and the trolling culture. The protests became increasingly trolling events, where they are coming into the liberal territory basically saying, 'We're far right, and we're coming into your city, what are you gonna do about it?'"

According to the Anti-Defamation League, "Both Patriot Prayer and Proud Boys espouse virulently anti-Muslim views, are vocally pro-Trump, and are known for their deliberate provocations of left-leaning West Coast communities."

Bogel-Burroughs, Nicholas. "What Is Antifa? Explaining the Movement to Confront the Far Right."   The New York Times. 2 July 2019.