U.S. President Dwight D. Eisenhower spoke out against censorship during a commencement address at Dartmouth College in 1953. 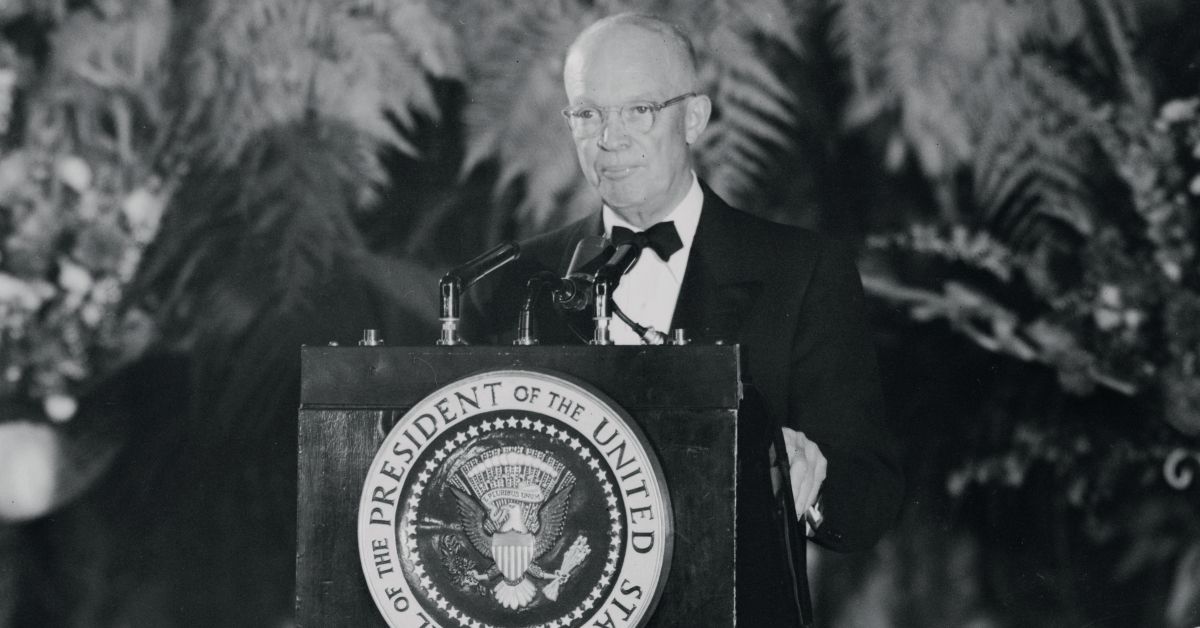 Claim:
U.S. President Dwight D. Eisenhower said, "Don't join the book burners. Don't think you are going to conceal faults by concealing the evidence that they ever existed. Don't be afraid to go into your library and read every book."
Rating:

It's true that Eisenhower spoke those exact words during a commencement speech at Dartmouth College in 1953. It should be noted, however, that this very popular version of the passage has been truncated in such a way as to omit a significant comment about eschewing materials that "offend our own sense of decency."

The inherent conflict between free speech and censorship has come to the fore again and again over the course of American history. We're reminded of this fact by the currency of a viral quote denouncing "book burning" attributed to Dwight D. Eisenhower, the nation's 34th president (1953-1961). The quote, albeit abbreviated, is correctly attributed to him.

As rendered in countless memes making the rounds on social media, it goes like this: "Don't join the book burners. Don't think you are going to conceal faults by concealing the evidence that they ever existed. Don't be afraid to go into your library and read every book." The Republican president spoke these words during a commencement address at Dartmouth College on June 14, 1953, in the first year of his presidency. In the roughly 10-minute speech, he commended two crucial personal qualities to the graduates: joy and courage. As to the first, Eisenhower implored his audience to be mindful of the advantages in life that paved their road to success, to set high personal standards and live up to them, and to find happiness in helping to make the world a better place. As to the second, Eisenhower said: "You must have the courage to look at all about you with honest eyes -- above all, yourself."

He went on to urge the graduates to look at their own country, even its imperfections, with those same honest eyes:

Look at your country. Here is a country of which we are proud, as you are proud of Dartmouth and all about you, and the families to which you belong. But this country is a long way from perfection--a long way. We have the disgrace of racial discrimination, or we have prejudice against people because of their religion. We have crime on the docks. We have not had the courage to uproot these things, although we know they are wrong. And we with our standards, the standards given us at places like Dartmouth, we know they are wrong.

And part of being able to look at one's country with honest eyes, he argued, is not siding with the "book burners" (emphasis added):

Don't join the book burners. Don't think you are going to conceal faults by concealing evidence that they ever existed. Don't be afraid to go in your library and read every book, as long as that document does not offend our own ideas of decency. That should be the only censorship.

How will we defeat communism unless we know what it is, and what it teaches, and why does it have such an appeal for men, why are so many people swearing allegiance to it? It is almost a religion, albeit one of the nether regions.

And we have got to fight it with something better, not try to conceal the thinking of our own people. They are part of America. And even if they think ideas that are contrary to ours, their right to say them, their right to record them, and their right to have them at places where they are accessible to others is unquestioned, or it isn't America.

As can be seen in the highlighted text, the untruncated passage includes a noteworthy clarification that appears to argue explicitly for eschewing all forms of censorship in favor of personal discretion: "Don't be afraid to go in your library and read every book, as long as that document does not offend our own ideas of decency. That should be the only censorship."

Correction [Aug. 12, 2022]: Clarified a previous misinterpretation of some of Eisenhower's remarks.