A viral tweet claimed a textbook for eighth-graders focused on the war's effect on a 20-year-old white woman whose family owned slaves. 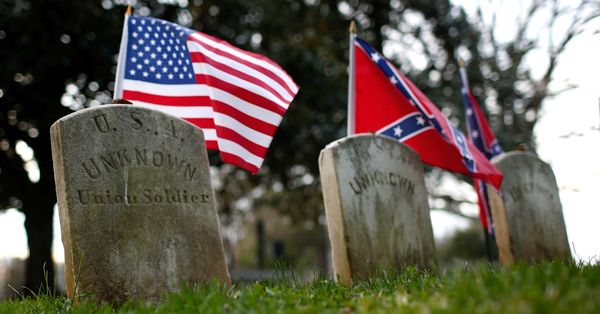 Claim:
A textbook called "Louisiana Our History, Our Home" — which is available to Louisiana eighth-grade teachers to incorporate into their social studies curriculum — introduces readers to the Civil War via the perspective of a wealthy white woman whose family owned more than 100 slaves.
Rating:

It is true that the Louisiana Department of Education reviewed a book of that title for eighth-grade teachers to possibly use in classrooms and made that fact known on the department's website. However, neither the book's publisher nor its author returned our requests to authenticate viral images purportedly showing the textbook's introduction to the Civil War from the perspective of Kate Stone, a 20-year-old white woman whose family operated a planation in northeast Louisiana and owned more than 100 slaves.

In mid-June 2021, thousands of Twitter users circulated the below-displayed tweet including images purportedly taken from an eighth-grade textbook in Louisiana that introduces the Civil War through the perspective of Kate Stone, a 20-year-old, wealthy white woman whose family owned more than 100 slaves.

"There are two approved Louisiana history textbooks for the state's 8th graders," read the tweet authored by Joshua Benton, who's the founder of Harvard University's Neiman Lab. "This is how one of them introduced the Civil War: as tough times for a poor young white woman whose family owned 120 slaves." Benton added to clarify his point:

That clarification was largely true. State law allows local school systems to establish required textbooks for students — since, according to the Louisiana Department of Education, educators "closest to students are best positioned to decide which instructional materials are appropriate for their district and classrooms."

For the purpose of this fact check we focused on Benton's underlying claim: that the Louisiana Department of Education reviewed a textbook called "Louisiana Our History, Our Home" for eighth-grade teachers to possibly include in social studies classes, and that that piece of literature introduces readers to the Civil War via the perspective of a wealthy, white woman whose family owned more than 100 slaves.

Under Louisiana law, the State Board of Elementary and Secondary Education oversees teams of teachers who regularly review textbooks submitted by publishers to determine if, or to what extent, they meet the state's teaching objectives in core subjects (English language arts, math, science, and social studies). A document outlining that process reads:

Pending the outcome of the state reviews, the state Department of Education lists the textbooks on its website for local school boards to consider while creating curricula, or for parents and students to see.

The list ranks the books on a three-tiered scale, with a "Tier I" label for learning materials that are of "exemplary quality and meet all criteria" and a "Tier III" designation for resources that "do not meet the non-negotiable criteria."

Let us note here: A financial incentive exists for local school systems that opt for books with the state's highest rating. Administrators can buy "Tier 1" materials using state funding; however, they must come up with local dollars to help cover the cost of "Tier 3" resources, according to state records. Also, school systems can instead forgo the state's review process altogether and rely on their own ratings of textbooks, or they can adopt a combination of state-reviewed and locally-reviewed materials.

As of this writing, the state department's list of "Instructional Materials Reviews" indeed included the textbook to which Benton referred in his viral tweet — titled "Louisiana Our History, Our Home" and published by Clairmont Press in 2015. Also, as Benton correctly stated, just one other textbook exclusively designed for eighth-grade social studies classes was similarly reviewed. Here's a screenshot of a portion of the list for proof:

Considering that evidence, it was true the Louisiana Department of Education reviewed the book for eighth-grade teachers to possibly use in classrooms and made that fact known on the department's website, despite the fact that local school districts ultimately decide what students read on a community-by-community basis.

Furthermore, the state department rated "Louisiana Our History, Our Home" with a "Tier III" label, citing a range of issues from its sourcing to interactive activities for students. Ted Beasley, the agency's director of communication, elaborated in an email to Snopes:

This Clairmont Press resource is Tier III, which is the lowest rating we have. This is the lowest possible rating we can give a resource. We rate all resources submitted by publishers. Tier 3 signifies materials that do not represent quality.

We do not have data on the number of systems or schools utilizing the referenced textbook.

The state's review of the controversial book, however, did not explicitly note anything about the purported introduction to the Civil War via the story of Kate Stone, a 20-year-old white woman whose family operated a planation in northeast Louisiana and at one point owned more than 100 slaves. (She documented the war's impact on them in diaries, and publishers later compiled those writings to create "Brokenburn: The Journal of Kate Stone.")

Next, we investigated whether the textbook indeed included the pages shown in Benton's tweet and below. Firstly, we attempted to contact Benton to learn how he made his alleged discovery. We were waiting on his response, as of the initial publication of this report.

Beasley told Snopes the state department was unable to confirm the authenticity of the pages. So, we reached out to Clairmont Press, as well as the textbook's listed author, Alecia Long, with the following questions:

We have not received responses from them, but we will update this report when, or if, that changes.

In sum, until we uncover verified evidence to corroborated the images in Benton's tweet thread, we cannot give this claim a traditional Snopes rating, so we therefore rate it "Research in Progress."

In follow-up tweets, Benton elaborated on his purported discoveries within the textbook, including a chapter that aimed to tell the story of Louisiana's post-war years by first sharing the experience of a Confederate soldier who eventually served as Louisiana's governor, Francis R. T. Nicholls. And, as of this writing, his biography on the state's Secretary of State website described Nicholls as a politician who considered the Antebellum Period as "a golden age in Louisiana" with the "planter approach to less government-low taxes, few official services and little involvement by Blacks in the political processes."