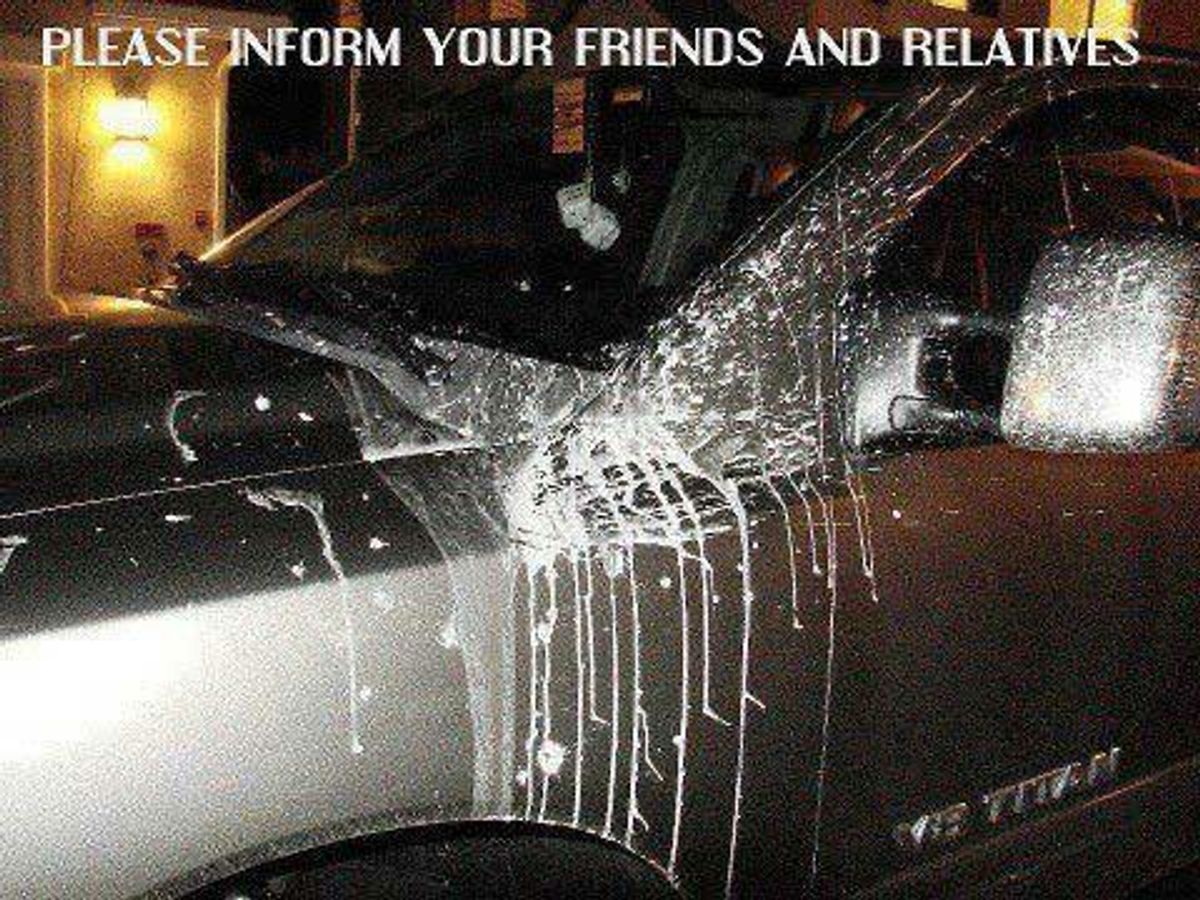 NEWS:   Are robbers really engaging in a "new" form of crime, flinging eggs at car windshields to impair drivers' vision and force them to stop?

It happens all the time: a message warning about a "new" form of crime that posits a danger to innocent citizens everywhere goes viral: criminals are robbing victims in store parking lots with ether-filled perfume bottles, carjackers are taking vehicles from owners lured by $100 bills placed under their windshield wipers, bad guys are abducting women by handing out burundanga-laced business cards at gas stations, gang members are flashing headlights at motorists to select random murder victims, etc.

But time after time after time, when enterprising reporters or skeptics have looked into such warnings, they've found that no one could document a single case of the crimes warned about actually occurring, much less taking place on a frequent or widespread basis. But eventually, someone will cite some vaguely-related, unconfirmed incident and assert it constitutes "proof" that the warnings were real: The shopper who encounters a perfume salesman in a store parking lot will insist that she was about to be robbed had she not quickly fled the scene (even though no attempt was made to render her unconscious or rob her), the driver who encounters an oncoming car flashing its headlights for no apparent reason will claim he would have been killed by gang members had he not refrained from flashing his lights in return (even though no one in the other car fired, or even showed, a weapon), the gas station customer who feels ill after an encounter with a stranger will protest that she must have been furtively slipped some form of knock-out drug (even though people take ill all the time for a multitude of reasons having nothing to do with the surreptitious application of burundanga).

Such rumors are often furthered in their spread not just by e-mail or social media users, but by law enforcement agencies themselves: When a police department posts a copy of an online warning to their web site, that action lends the rumor an air of unassailable verisimilitude. Unfortunately, law enforcement often errs on the side of caution and broadcast warnings they haven't verified under a philosophy of "better safe than sorry," thereby giving credence to a variety of urban legends, hoaxes, and unsubstantiated Internet chatter.

So it is now with the infamous warning about criminals employing a "new" technique of throwing eggs at the windshields of cars to force the drivers to stop their vehicles (in order to clear their windshields of the sticky, vision-impairing mess), whereupon the egg-throwers proceed to set upon and rob the hapless motorists. This warning has been widely circulated online multiple times since 2009, despite the lack of any documented instances of this form of crime actually taking place.

But in July 2015, one Facebook user in Regina, Saskatchewan, posted an account of her supposedly having been set upon by an egg-throwing gang of three men who were intent upon getting into her car for unknown reasons:

Tonight driving down grant drive around 10:45 an egg hit the drivers side of my windshield. Unable to see through the...

Soon enough, the news media jumped on the bandwagon and touted this report as an example of a "hoax" come true:

As we've seen this same pattern of rumor "verification" recur multiple times, we'll point out some common aspects of it:

o The account related above is so far unsubstantiated. Although Regina police have confirmed that they received such a report and are investigating it, the fact that someone reported an incident to the police does not necessarily mean that it occurred, or that it took place as described by the complainant.

o Until a reported incident has been investigated by police, the actions and motives of the persons involved cannot be ascertained. Incidents that people frequently assume to be representative of criminal activity often turn out to be pranks, vandalism, misunderstandings, jokes perpetrated by acquaintances of the "victims," furtherances of extant disputes between parties, or something other than attempts to rob or harm random targets.

o A single reported instance of an activity does not establish that claims of its being a common and widespread criminal occurrence (as viral warnings typically make them out to be) are "true." All that one report signifies is that someone, somewhere, once may have acted in a way that conformed to an existing rumor (a process known as ostension).

As always, we await the results of a police investigation. Perhaps a random victim was indeed targeted by an egg-throwing gang. Or perhaps, as we see over and over, the real story proves to be something quite different than initially assumed.