Was a nineteenth-century Englishman named Edward Mordake (or Mordrake) born with a malevolent "second face" on the back of his head? 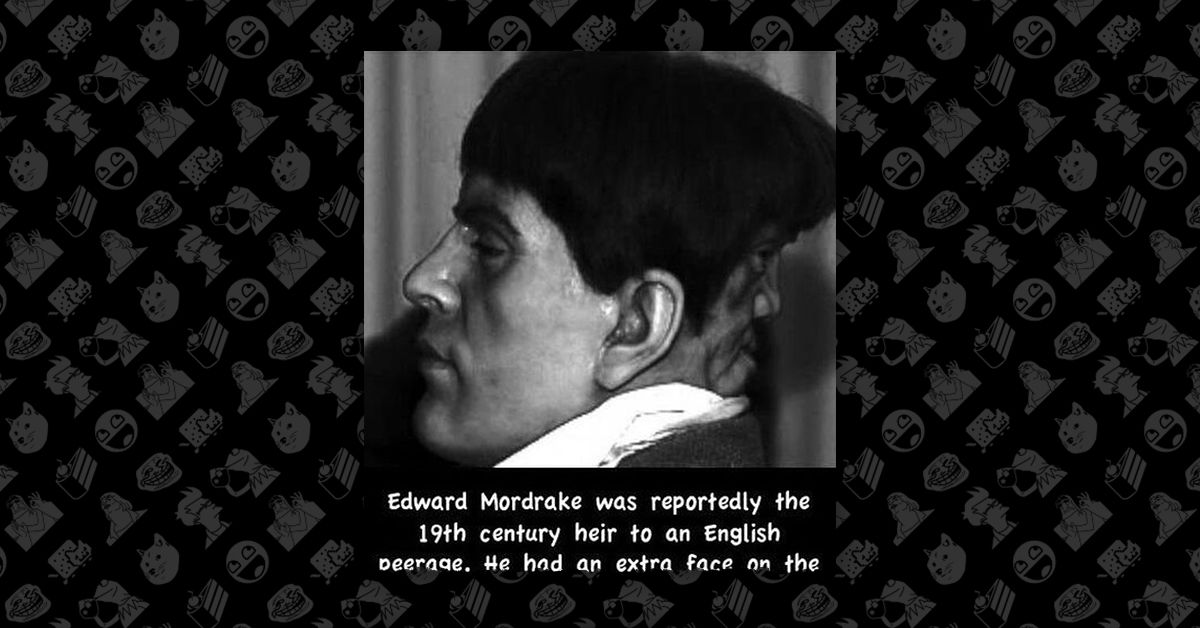 Claim:
A nineteenth-century British man named Edward Mordrake (also spelled "Mordake") was born with a rare medical condition in the form of a extra face on the back of his head.
Rating:

One of the more interesting historical nuggets to cross our transom in recent years is the claim that a certain English gentleman of the nineteenth century named Edward Mordrake (or "Edward Mordake," according to older sources) was born with a bizarre medical condition so troubling that it drove him to suicide: According to an internet meme, Edward Mordrake was the 19th century heir to an English peerage. He supposedly had an "extra face" on the back of his head. "Head of Edward Mordrake preserved for posterity," credited to EJSchindler on DeviantArt.com.

Albeit popularized in the 2000s via memes, songs, and TV shows, the Edward Mordrake story isn't of recent origin, having aroused the morbid interests of Victorian readers more than a century ago in Gould and Pyle's Anomalies and Curiosities of Medicine, first published in 1896. This is how the authors of that hefty volume recounted it:

The following well-known story of Edward Mordake, though taken from lay sources, is of sufficient notoriety and interest to be mentioned here:

"One of the weirdest as well as most melancholy stories of human deformity is that of Edward Mordake, said to have been heir to one of the noblest peerages in England. He never claimed the title, however, and committed suicide in his twenty-third year. He lived in complete seclusion, refusing the visits even of the members of his own family. He was a young man of fine attainments, a profound scholar, and a musician of rare ability. His figure was remarkable for its grace, and his face – that is to say, his natural face – was that of Antinous. But upon the back of his head was another face, that of a beautiful girl, ‘lovely as a dream, hideous as a devil.’ The female face was a mere mask, ‘occupying only a small portion of the posterior part of the skull, yet exhibiting every sign of intelligence, of a malignant sort, however.’ It would be seen to smile and sneer while Mordake was weeping. The eyes would follow the movements of the spectator, and the lips would ‘gibber without ceasing.’ No voice was audible, but Mordake avers that he was kept from his rest at night by the hateful whispers of his ‘devil twin,’ as he called it, ‘which never sleeps, but talks to me forever of such things as they only speak of in hell. No imagination can conceive the dreadful temptations it sets before me. For some unforgiven wickedness of my forefathers I am knit to this fiend – for a fiend it surely is. I beg and beseech you to crush it out of human semblance, even if I die for it.’ Such were the words of the hapless Mordake to Manvers and Treadwell, his physicians. In spite of careful watching he managed to procure poison, whereof he died, leaving a letter requesting that the ‘demon face’ might be destroyed before his burial, ‘lest it continues its dreadful whisperings in my grave.’ At his own request he was interred in a waste place, without stone or legend to mark his grave."

Despite the credulous reception the story has frequently received, there are plenty of reasons to be skeptical. For one, the entire passage about Edward Mordrake was quoted from what the authors describe as "lay sources" (more about which later), which sets it apart from other entries (such as their account of the life of Joseph Merrick, the "Elephant Man") drawn from actual medical case histories. For another, it is heavy on melodrama (e.g., "he was kept from his rest at night by the hateful whispers of his ‘devil twin,’ as he called it"), while giving only the slightest nod to science (apart from applying the now-antiquated medical classification "bicephalic monsters," there is really no scientific verbiage at all). And although it purports to cite two attending physicians, "Manvers and Treadwell," a critique of the entry in the 1906 edition of The Theosophical Review reported that the names appeared nowhere in the Dict. of National Biography (a Victorian-era Who's Who).

The origin of the black-and-white photograph purporting to show Edward Mordrake and his "devil twin" in profile (which has appeared in Internet postings since 2007) is unknown. Despite its "vintage" appearance, the image exhibits greater resolution and clarity than what is typically seen in photographic reproductions of the mid-to-late Victorian era (e.g., the 1889 photograph of Joseph Merrick published in the British Medical Journal). It appears, in fact, to be a retouched photo of a wax figure in the Panoptikum Wax Museum in Hamburg, Germany.

A Case of Asymmetrical Conjoined Twins?

There does exist a real medical condition, Craniopagus parasiticus, whose symptoms bear a very basic resemblance to those described in this case. It's an extremely rare complication in conjoined twins wherein one of the pair is underdeveloped and less than fully functional (hence "parasitic"), and takes the form of a vestigial head attached to the cranium of the "autositic" (dominant) twin. According to a 2016 case report, there have only been ten or fewer recorded cases of Craniopagus parasiticus in history, "of which only three survived past birth and were documented in the literature." Of those three, two died before the age of two, despite surgical attempts to save the life of the autositic twin. The third, known famously as the "two-headed boy of Bengal," lived to be four years old and was reported to be in good health until he was bitten by a cobra and died.

Most significantly, as regards the Edward Mordrake case, conjoined twins are by definition genetically identical, so they are always of the same sex. The "devil twin" described in that case was female, while the autositic twin was male (though it could be argued, of course, that the vestigial face was misidentified as female).

That the "sneering" face had no audible voice comports with such information as we have on real cases of Craniopagus parasiticus, but the claims that it exhibited "every sign of intelligence" and taunted the poor man with "hateful whispers" do not. Accounts of the two-headed boy of Bengal said the vestigial face in that case could "grimace" and its eyes were observed moving, for example, but though there could have been some sort of rudimentary consciousness present there were no signs of intelligence.

Alternatively, it has been suggested that Mordrake might have suffered instead from a congenital defect known as Diprosopus (or craniofacial duplication), in which facial features are duplicated to a greater or lesser extent on other areas of the head (in the rarest cases, the full face is duplicated). The mechanisms behind this deformity aren't fully understood, although many researchers believe it to be another rare form of conjoined twinning. Although somewhat more common than Craniopagus parasiticus (with just under 50 instances documented since the mid-nineteenth century), Diprosopus has a similarly poor survival rate, with most cases ending in stillbirth.

In short, although science does offer theoretical explanations for Mordrake's condition, they are few and only marginally plausible.

About Those 'Lay Sources'

Gould and Pyle reported in 1896 that the "well-known story of Edward Mordake" they quoted was taken from "lay sources" — plural — despite the fact that there was really only one. Science historian Alex Boese has traced the quoted text, verbatim, to a syndicated newspaper article written in 1895 by Charles Lotin Hildreth, a poet and author of speculative fiction:

The article, titled "The Wonders of Modern Science: some half human monsters once thought to be of the Devil's brood," describes a variety of remarkable "human freaks" whose cases Hildreth claims to have found in old reports of the "Royal Scientific Society" (the "musty old pages" of which, he tells us, are characterized by their "long S's and their turgid phraseology").

Among the cases Hildreth details are the "Fish Woman of Lincoln" — a young girl whose legs, from the hips downward were "covered with shining scales and terminated in the most exact tails of fish." There's a "half human, half crab" whose hands and feet end in enormous, hard-shelled claws. The "melon child of Radnor," we learn, had a head the size and color of a melon, with no perceptible organs of sense except a vertical slit for a mouth. Mr. Pewness of Stratton had feet where his hands should be, "and vice versa." The "four-eyed man of Cricklade" had two sets of eyes, one above the other. "Jackass Johnny" was cursed with "a pair of enormously long, furry ears, exactly like those of an ass." The "Norfolk spider" was a monstrous thing that crawled upon its belly with six hairy jointed legs with claws and a human head.

What all these "wonders of science" had in common, Boese points out, is that no mention of them is to be found in any previous sources. None. It appears, in other words, that Hildreth simply made them up. Albeit couched as nonfiction, the article was actually a work of speculative fiction in the spirit of other scientific hoaxes of the time, such as the infamous life-on-the-moon hoax of 1835 and the Cardiff Giant hoax of 1869.

Boese concludes -- convincingly, we find -- that Edward Mordrake was the literary creation of Charles Lotin Hildreth. He never really existed.