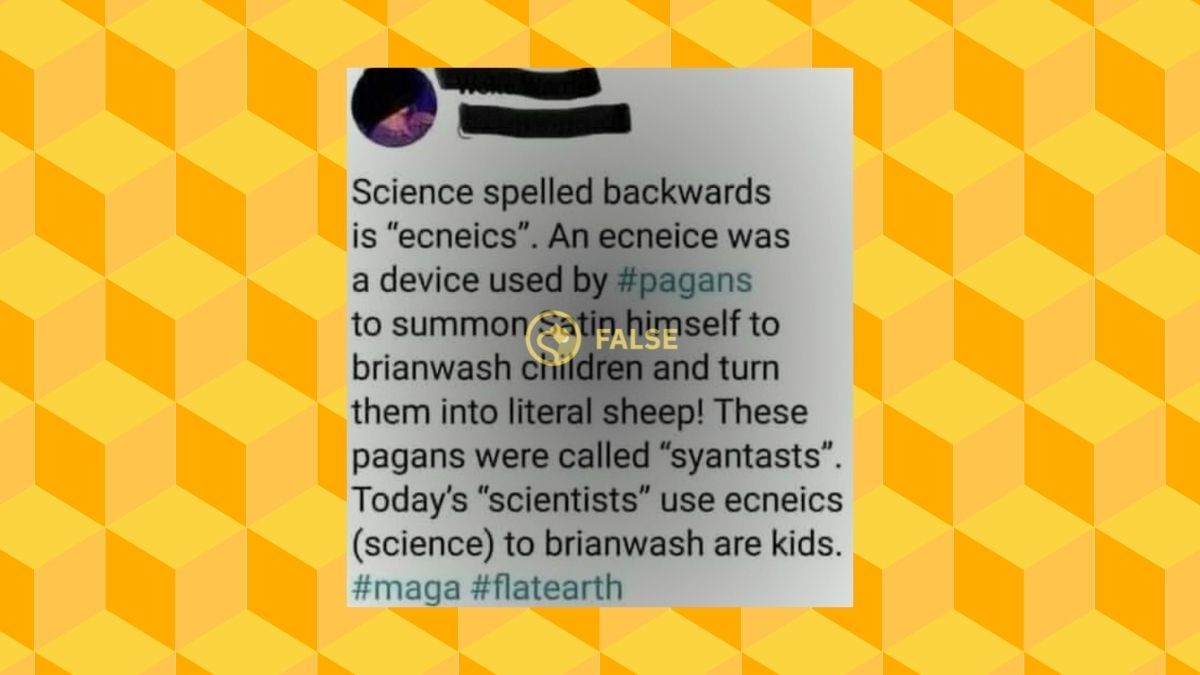 Claim:
"Ecneics" ("science" spelled backwards) is a pagan word that refers to a device for summoning "Satin."
Rating:

In November 2021, health officials announced that they had discovered a new variant of COVID-19 and that they were calling the new strain "omicron." Shortly thereafter, internet users pointed out that "omicron" is an anagram for "moronic." While this linguistic oddity proved humorous to some, others attempted to use this interesting, albeit completely irrelevant, factoid to sow doubt about the vaccines, falsely claiming that the pandemic was a hoax and that scientists were flaunting their control over society by naming these variants with disguised insults. (In reality, this variant was named after a letter in the Greek alphabet.)

As this conspiracy theory gained traction, a similar rumor started to circulate on social media claiming that "ecneics," science spelled backwards, was a pagan term for a device that was used to summon "Satin" (an apparent misspelling of "Satan"). "Ecneics" is not a pagan word for a "Satin"-summoning device that was used to "brianwash" children and turn them into "syantasts."

The above-displayed tweet has been floating around since at least 2019. It's often shared in jest by those mocking people who have endorsed pseudoscience (such as those putting weight on the fact that omicron is an anagram of moronic). It was first posted by the now-defunct Twitter account @Warriorofwoke, an account that frequently posted messages about "chemtrail" and "flat earth" conspiracy theories.

While we're not sure of the original poster's intent, the multiple misspellings in this tweet, the outrageousness of the claim, and the fact that it was posted by an account that often posted outlandish takes on conspiracy theories, leads us to believe that this message was first posted as a joke. In any case, "ecneics" is not a pagan word.

Even so, it has been used on occasion over the decades. In 1974, the "New Scientists" published an article about "The Philosopher of Ecneics," a Japanese doctor who believed it was important to be critical of the influence science had on society. More recently, Chicago Tribune columnist Rex Huppke used the word in a 2015 article, writing:

I'm not exactly sure what "science" means. I could look it up in a dictionary, but I don't believe in dictionaries. I've heard they cause brainwashing and are in the pocket of Big Lexicography.

It's thanks to that kind of logic that America faces the return of the once-eradicated measles virus. A small, vocal and highly insufferable portion of the population has taken it upon themselves to doubt the irrefutable scientific evidence that childhood vaccinations are safe and effective. And so they don't vaccinate their kids.

The problem is, we've got too many people who believe in "ecneics" (pronounced eck-nakes), which is "science" spelled backward. While scientists study the physical and natural word and reach consensus based on experimentation and observation, ecneictists (eck-nake-tists) look at a scientific consensus and then decide the opposite is true because that's what they want to believe.

Ravenswood, Erik. The Dictionary of Wicca, Witchcraft and Magick. Light Of The Moon Publishing, 2018.