A compendium of superstitions and lore associated with the holy day of Easter. 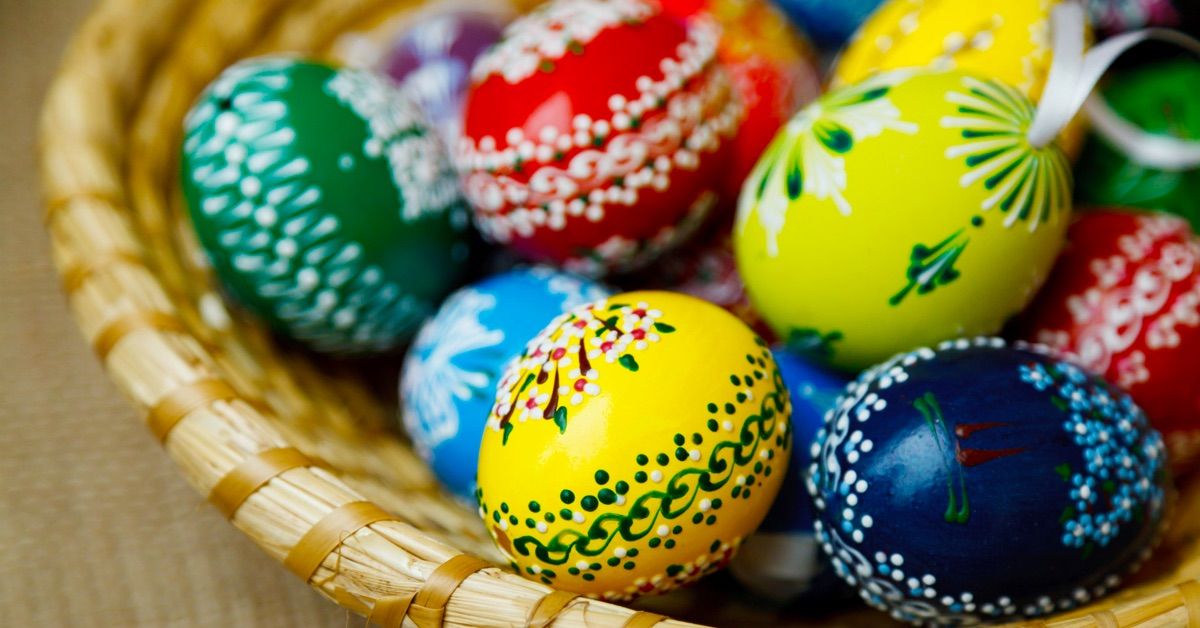 In the modern era, Easter Sunday generally falls on the Sunday following the Paschal Full Moon (i.e., the first full moon of Spring in the northern hemisphere, or the first full moon occurring after the date of the vernal equinox), and as such, can fall on any day between March 22 and April 25. It is not mere coincidence this most Christian of celebrations corresponds with the beginning of Spring: the deliberate linking of Son and sun is a motif throughout Christian literature. (Even though the words 'son' and 'sun' are not homophonous in other languages, Jesus, the son of God, is frequently associated with light and sources of light — such as the sun — in literature.) In Easter, Christian and pagan beliefs are brought together as resurrection — both of Christ and of the slumbering countryside after its long winter's nap — and are celebrated in a festival that reaffirms the triumph of life over death. Elements of both belief systems bubble to the surface in this holiday, combining into a melded whole wherein both chocolate bunnies and solemn Easter services play a part.

The name for this holiday comes from much older times whose customs we're now not all that familiar with. Many old religions had a Spring Goddess, a special deity who breathed life back into the world, both by banishing Old Man Winter and by encouraging growing things to grow and living things to mate. She went by many names. The Scandinavians called her Ostra, the Anglo-Saxons Eostre, and those who lived in the region that is now Germany knew her as Eastre. (Contrary to some modern claims, the term "Easter" was not derived from the name of Ishtar, the Assyrian and Babylonian goddess of fertility and sex.)

All manner of rabbits are said to lay eggs on Easter Day. The hare itself is revered in lore — even in pre-Christian times, it was seen as a holy creature associated with fertility and the returning Spring. Important divinations about the character of the coming year were made from studying its movements. In northern Europe, the hare was considered sacred to Eastre, and therefore was not to be hunted.

The Easter Bunny is of German origin. He shows up in 16th century literature as a deliverer of eggs, in his own way a springtime St. Nicholas bent on rewarding the good. (Colored eggs were left only for well-behaved good children, you see.)

Eggs are very obvious symbols of resurrection and continuing life. Early humans thought the return of the sun from winter darkness was an annual miracle, and saw the egg as a natural wonder and proof of the renewal of life. The egg is also the ultimate symbol of fertility. As Christianity spread, the egg was adopted as a symbol of Christ's resurrection from the tomb (a hard casket from which new life will emerge).

For centuries, eggs were listed among foods forbidden during Lent, so having them at Easter was a special treat that marked the end of a lengthy period of self-denial. The candy Easter eggs of modern times hark back to eggs used for a more serious purpose. Hardboiled eggs were dyed red in memory of Christ's blood, then given to children as a talisman to preserve their health over the ensuing twelve months. This custom survived in slightly altered form almost until the present — it wasn't that long ago one would find beautifully decorated Pace eggs kept year-round in British households for luck. The protective qualities of the scarlet-dyed egg are still invoked in parts of Europe to guard fields and vineyards from lightning and hail — one of these eggs will be buried on the property for that purpose.

Eggs themselves have their own lore, applicable both at Easter and other times. Breaking the smaller end of the egg betokens only disappointment of one's hopes — with that supposedly lying in store, it makes sense to smack it open at the larger end. The discovery of a double yolk within is cause for terror or celebration depending on which school of thought is followed — some say it presages a wedding, others a death. Once the egg is consumed, its shell must be broken up lest a witch use it to gain power over the person who ate from it. A witch might also make a boat from an intact shell, then set sail in it and wreck ships at sea. Discarded eggshells should never be burned because doing so will cause the hens to cease to lay.

Easter lilies come by their name because of their shape (like Gabriel's trumpet; another resurrection motif), color (white, symbolizing purity), and because they grow from bulbs, thus consequently seem to spring from the earth unbidden after the long months of winter. Incidentally, the lily was associated with the Virgin Mary, hence its common name, Madonna lily.

Numerous superstitions and bits of lore surround both Easter Sunday and Good Friday. One odd belief is that in celebration of Christ's resurrection, the sun "dances" as it comes up on Easter morning. If looked at through a darkened lens, it is said to bear the imprint of a lamb, an image which has symbolic associations in Christian mythology.

It is said a wind that blows on Easter Day will continue to blow throughout the year, and that a shower of rain promises a good crop of grass but little hay.

Most people are familiar with the custom of having new clothes (or at least a new bonnet) for Easter, but few know where the tradition sprang from. Easter is preceded by Lent, and at one time the same set of clothing was worn throughout that period, then discarded for a new outfit on Easter Sunday. A little bit of superstition still clings to the custom of having new duds for the day: those who fail to wear at least one new item risk having their existing clothes soiled by birds or spat upon by passing dogs. Indeed, some say one risks having one's eyes pecked out by crows!

Children born on Easter Day are deemed especially fortunate. Those born on Good Friday, however, are doomed to be unlucky.

Holy water saved from the Easter service is said to be particularly effective as a cure for a wide range of ills.

One curious belief has to do with "Lady Day," March 25, the Feast of the Annunciation of Our Lady. For many centuries this date was reckoned throughout most of Christendom as the first day of the year. An old and well-known English rhyme says:

If Our Lord falls in Our Lady's lap,
England will meet with a great mishap.

It is said if either Good Friday or Easter Sunday falls on March 25 (and so coincides with Lady Day), some national misfortune will follow within the next twelve months. It is not certain how old this belief is, but a couple of national tragedies in the preceding hundred years have certainly helped to keep it alive. Good Friday fell on March 25 in 1910, and in May of that year, Edward VII died after a short illness. In 1951 Easter Sunday fell on that date, and little less than eleven months later, George VI died suddenly. The next March 25 Easter falls in 2035.

Good Friday has superstitions of its own, many of them cautions against engaging in various activities. Anything to do with nails or iron tools should be avoided as must the planting of crops (iron instruments must not break the ground).

It is said clothes washed on that day will never come clean, a reference to the legend that Christ cursed Good Friday washing after he was slapped in the face by a wet garment while being led to his crucifixion. Further superstitions are that one risks "washing away" a family member (causing the death of) or of finding one's laundered items spotted with blood.

Children are to avoid climbing trees. For grownups, engaging in work of any kind is far from a good idea: folk wisdom affirms the task will only have to be done over again at a later time. Strangely enough, sewing done on that day will never come undone.

But it's not all bad news. Wishes made in prayers intoned at the stroke of 3 PM (the hour of Christ's death) are sure to be granted.

Bread and buns baked on Good Friday will never go moldy; neither will eggs laid on that day spoil. Both food items are said to have beneficial properties if fed to those suffering from whooping cough, stomach and digestive maladies, or other ailments. Centuries ago, Good Friday bread was kept for years, with a little bit grated off and administered to the sick whenever necessary. A hot cross bun kept from one Good Friday to the next protects the house from fire. Throwing an egg laid on Good Friday into a fire is said to quench it, no matter how terrible the blaze.

Boys who don long trousers for the first time on this day are fated to have happy marriages, and no day is more auspicious to begin weaning a child on. This is also the day to take bees from their hives — no harm will come to them.

Finally, a bit of practical Easter "magic" that is more science than lore: Don't wait until the last minute to buy eggs for hard-boiling for decorating and use in Easter games. Purchase them a week ahead and store them in the refrigerator prior to cooking. Week-old eggs peel more easily than fresh ones after they are hard-cooked.