Does Joe Biden Have a Body Double?

The answer is supposedly in the earlobes. 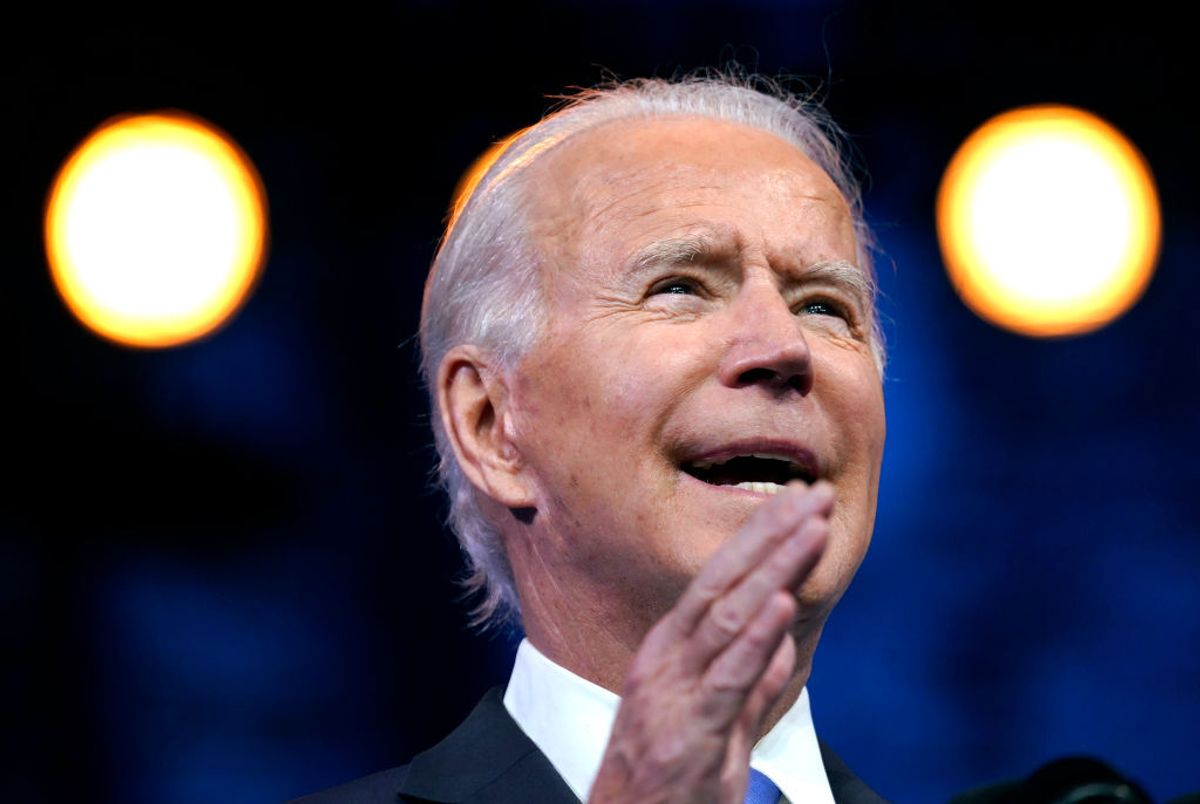 Claim:
Photographs of President-elect Joe Biden's earlobes over time shows an individual stands in as him for some public events.
Rating:

A rumor holding that U.S. President-elect Joe Biden, 78, used a body double for certain public events emerged on social media during his 2020 campaign against incumbent President Donald Trump and his subsequent transition into the White House. Among the examples of the rumor brought to our attention were a series of TikTok videos uploaded by one user in late November that focused on Biden's earlobes and included following narration:

In the video, TikTok user @dannycardenasziv apparently recorded a still image of Biden on another media device — perhaps a television or computer monitor. The image showed the incoming president from the neck up, wearing a suit and tie and facing a direction to show his left ear (see screenshot below) in front of a backdrop with his 2020 campaign slogan, "Build Back Better." No visual clues, nor the TikTok user's narration, explained when, where or under what circumstances Biden attended the pictured event.

These were the video's underlying claims: Another human being who looked nearly identical to the incoming president — except for the earlobes — not only exists but trades places with the original Biden on occasion. Of the (allegedly) two men shown in the video, one had "unattached" earlobes, meaning his earlobes curved and their lowest points were not attached to the sides of his head. Meanwhile, the "other" man had earlobes "attached" directly to his head. The same theory surfaced in tweets and Reddit posts, including a page titled "Is Joe Biden a clone? Check his earlobes," that alleged photographic evidence from 2008 and 2020 showed Biden with detached and attached earlobes, respectively. All of those photos showed the president-elect's right, not left, earlobe, just like one of the videos in the TikTok series (screenshot below) alleging the attached look is a sign of a conspiracy.

"Either Biden has different earlobes in 2020 or we have a different Biden [...] or is it an imposter?" one person tweeted..

First, let this be clear: The term cloning, mentioned in one of the claim sources above, refers to human reproductive cloning to produce a genetic copy of an existing person, and that has not been achieved as of this writing, eliminating the possibility that Biden has a literal "clone" who stands in for him on occasion.

Additionally, some arguments by social media posts were flawed in that they only compared alleged changes in Biden's appearance by examining one side of his face, or the posts used one side to make the argument he had attached earlobes (right) and the other side to argue he had unattached earlobes.

It's worth noting here: The call of deciding under what category an earlobe fits is subjective, and there is a spectrum of both detached/attached types given the numerous genetic variations of earlobe traits. Also, the angle from which photographers take portraits of people can affect how earlobes appear in photos.

As a starting point for investigating the conspiracy theory, Snopes obtained the below-displayed portrait of Biden in 1973, during his first year representing Delaware in the U.S. Senate, thanks to the Library of Congress. His earlobes were unattached from his head, as you can see. We analyzed dozens of images via news reports, Getty Images, government websites and other sources that showed Biden throughout his career, including during his final Senate term (Jan. 2007 to Jan. 2009) and tenure as vice president in former President Barack Obama's administration (Jan. 2009 to Jan. 2017). The photo below, for example, was taken at the Concordia Europe Summit on June 7, 2017, in Athens, Greece. Biden's right earlobe appeared unattached. Considering the feature image on this report showing the president-elect on Dec. 14, 2020, after states certified voter tallies affirming his presidential win over Trump, as well as other photographic evidence in 2020, we can say definitively: Biden's right earlobe looked noticeably different during and after his 2020 presidential campaign compared to eras prior.

But that fact aside, alleging that the apparent change in Biden's appearance revealed a secret "body double" scheme erroneously eliminates other, and potentially more likely, explanations for the change.

In other words, advocating the Biden body double theory required ignoring the simple fact that Biden was aging like every other human (and, therefore, his appearance was changing), and the possibility that he had a medical issue that required facial surgery, or that he sought a face-lift for cosmetic reasons, altering at least one of his earlobes. According to Mayo Clinic:

"In general, a face-lift involves elevating the skin and tightening the underlying tissues and muscles. Fat in the face and neck may be sculpted, removed or redistributed. Facial skin is then re-draped over the newly repositioned contours of the face, excess skin is removed, and the wound is stitched or taped closed."

Considering that process, scars or other physical changes to patients' ears are signs of face-lifts, according to Dr. Anthony Youn, a Michigan plastic surgeon, according to CBSNews.

While Biden himself has, to date, not commented on if or to what extent he underwent facial cosmetic surgery, rumors that he had had surgery appeared in news reports, including an Oct. 27, 2019, New York magazine profile that read:

There, just behind the ear, is where you can supposedly observe the scar from a face-lift, one of many cosmetic procedures Biden is rumored to have had.

The dramatic change to Biden's appearance is a matter of preoccupation for Biden-watchers. In the timeline of images from throughout his career, you can observe as he grows older and then younger and then older but somehow more elegant and alert.

Roughly one year later at a Trump rally, the sitting president highlighted the unsubstantiated claim in attempt to discredit Biden and his use of masks to prevent the spread of COVID-19. "Whatever makes you feel good," Trump said. "I mean honestly, what the hell did he spend all that money on the plastic surgery if he's going to cover it up with a mask?"

After that comment, a Detroit radio station, WWJ Newsradio 950, interviewed Michigan cosmetic surgeon Dr. Gregory Roche, who claimed Biden indeed had a face-lift and possibly other work done, based on his public appearance.

In sum, considering the speculation that Biden may have received facial surgery and that those procedures were the most likely and plausible reasons for any changes in his appearances — as well as the facts that there has been no human reproductive cloning as of this writing and that differences in physical characteristics beyond earlobes would emerge as evidence of the alleged body-double conspiracy — we rate this claim "False."