Did the Eagles Respond to Trump's Congratulatory Tweet With a Vulgarity?

An image purportedly showing the official Twitter account for the Philadelphia Eagles telling President Trump to "go f*ck himself" is not real. 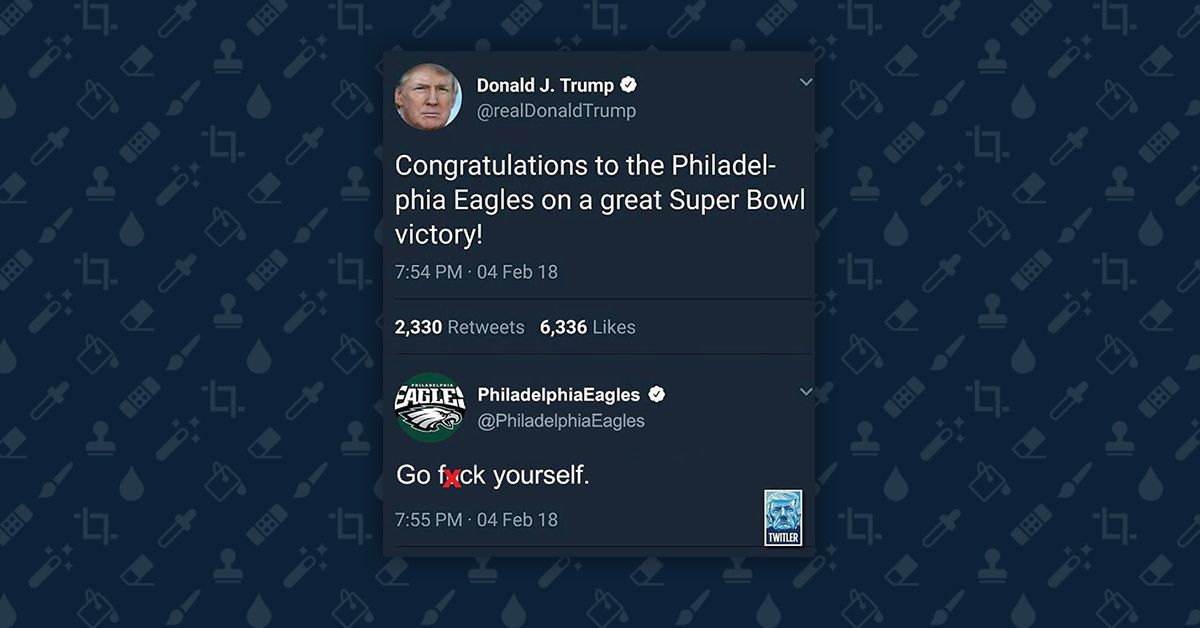 Claim:
The Philadelphia Eagles responded to a tweet from President Trump congratulating the team on winning the Super Bowl by telling the Commander-in-Chief to go f*ck himself.
Rating:

When the Philadelphia Eagles claimed victory over the New England Patriots at Super Bowl LII, some spectators had a political question on their mind: Will the winning players attend a ceremony at the White House?

President Donald Trump has made several disparaging remarks about the NFL players who protested police brutality during the National Anthem, after all, and a few players boycotted the previous year's celebration saying that they "didn't feel welcome."

So when an image started circulating on social media purportedly showing the Eagles telling President Trump to "go fuck himself" after he sent out a tweet congratulating them on their Super Bowl victory, some social media users were prone to believe that it was real: Second, the "Twitler" symbol in the bottom right corner of the image corresponds with a Facebook page that frequently posts memes and jokes at President Trump's expense.

This fake tweet was originally accompanied with a caption labeling it as "parody": The Philadelphia Eagles did not tell President Trump to go fuck himself.

However, some players have already announced that they don't plan to attend a ceremony at the White House. New York magazine reports:

Chris Long, who is white, voiced support for his teammates’ protests throughout the season. “For me, being from Charlottesville, no one wants to see you sit idly by and watch that stuff happen and not say anything,” Long said in the aftermath of the deadly white-supremacist demonstration in his hometown. “And I wish there was more categorical denial from some very important people in this country who have had the opportunity to strike it down but didn’t.”

Last week Long became the first Eagles player to announce he would boycott the celebration with Trump. “No, I’m not going to the White House,” he said on the Pardon My Take podcast. “Are you kidding me?”

Eagle LeGarrette Blount, who played for the Super Bowl-winning Patriots last year, skipped that trip to the Trump White House saying he didn't feel welcome. He was joined by more than two dozen other Patriots players, including Tom Brady, who cited family matters.