I started this Face book page in 2010. I lost my beautiful Black Labrador retriever on 3/8/2010. He ate one of these bones and it broke into sharp shards and punctured his bowel. I took the rest back to Same Club and the manager said he wouldn't sell them anymore. Sad to say not true. The FDA investigation is going on supposedly , but I hear beings its a pet "treat" they won't or can't do nothing. Sad to hear people are still losing there pets , 5 years and counting since I lost Sammie. Hopefully someday these heartless bastards will stop looking at $$$ and cease making them. RIP Sammie.

I purchased a Real Ham Bone made by Dynamic Pet Products, from Wal-Mart on Sunday 3/1/15. I gave it to Fred, our bassett hound, he chewed on it and ingested some. By Monday morning 3/2/15, he was vomiting and having severe diarrhea. By the afternoon, he was bleeding out of his rectum and we rushed him to the vet. He was put in intensive care and we were told he was so sick, the vet recommended we put him to sleep. I am never going to forgive myself for buying him that deadly treat. Please share this so others don't make the same mistake I did. DYNAMIC PET PRODUCTS (in Missouri) know they've killed dozens of dogs and they still sell them at big retail companies like Sam's Club and Wal-Mart. 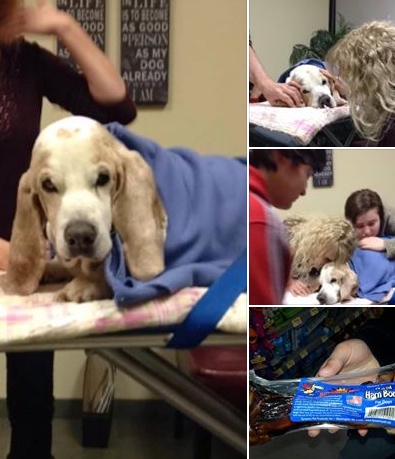 following the death of her family's basset hound, Fred. Both on Facebook and in an interview with a local news station, members of her family stated that Fred had received a Dynamic Pet Products Real Ham Bone on 2015 and died the following day.

The family's story was not the first complaint lodged about Dynamic Pet Products Real Ham Bone. Several negative reviews had been published to consumer complaint sites, spanning several years and alleging problems similar to those reported by Reed's family. (Additional warnings have circulated among animal lovers on social media sites about canine jerky treats and other forms of pet chew treats.)

As early as 2010, U.S. the Food and Drug Administration (FDA) had investigated Dynamic Pet Products Real Ham Bone following consumer complaints, and at that time a disclaimer about the product displayed on the manufacturer's web site stated that:

Not recommended for aggressive recommend they eat a Beef Bone. As with all natural bones, we recommend supervision during eating.

The FDA did not issue a specific warning about Dynamic Pet Products Real Ham Bone at that time, but the agency did issue a general warning against bones as chew toys in 2010. According to the FDA, rectal bleeding, intestinal blockage, and broken teeth were among the adverse outcomes linked to bones:

"Some people think it's safe to give dogs large bones, like those from a ham or a roast," says Carmela Stamper, D.V.M., a veterinarian in the Center for Veterinary Medicine at the Food and Drug Administration. "Bones are unsafe no matter what their size. Giving your dog a bone may make your pet a candidate for a trip to your veterinarian's office later, possible emergency surgery, or even death."

"Make sure you throw out bones from your own meals in a way that your dog can't get to them," adds Stamper, who suggests taking the trash out right away or putting the bones up high and out of your dog's reach until you have a chance to dispose of them. "And pay attention to where your dog's nose is when you walk him around the neighborhood — steer him away from any objects lying in the grass."

Veterinarians who treated Fred before his death in March 2015 said they weren't sure whether Dynamic Pet Products Real Ham Bone was to blame:

Fred was in such bad shape when they took him to California Veterinary Specialists in Carlsbad that the family said their goodbyes and put him down.

The veterinarians [said] they did not have a definitive answer about what made Fred ill because the family could not afford to run the tests.

Dynamic Pet Products released a statement in response to the claims advising dog owners to supervise pets with any treats or snacks. According to the FDA, bones are generally unsafe for dogs and should not be given as treats.