The conviction of Charleston church shooter Dylann Roof led to the recirculation of rumors he is actually a former child star and crisis actor named John Christian Graas. 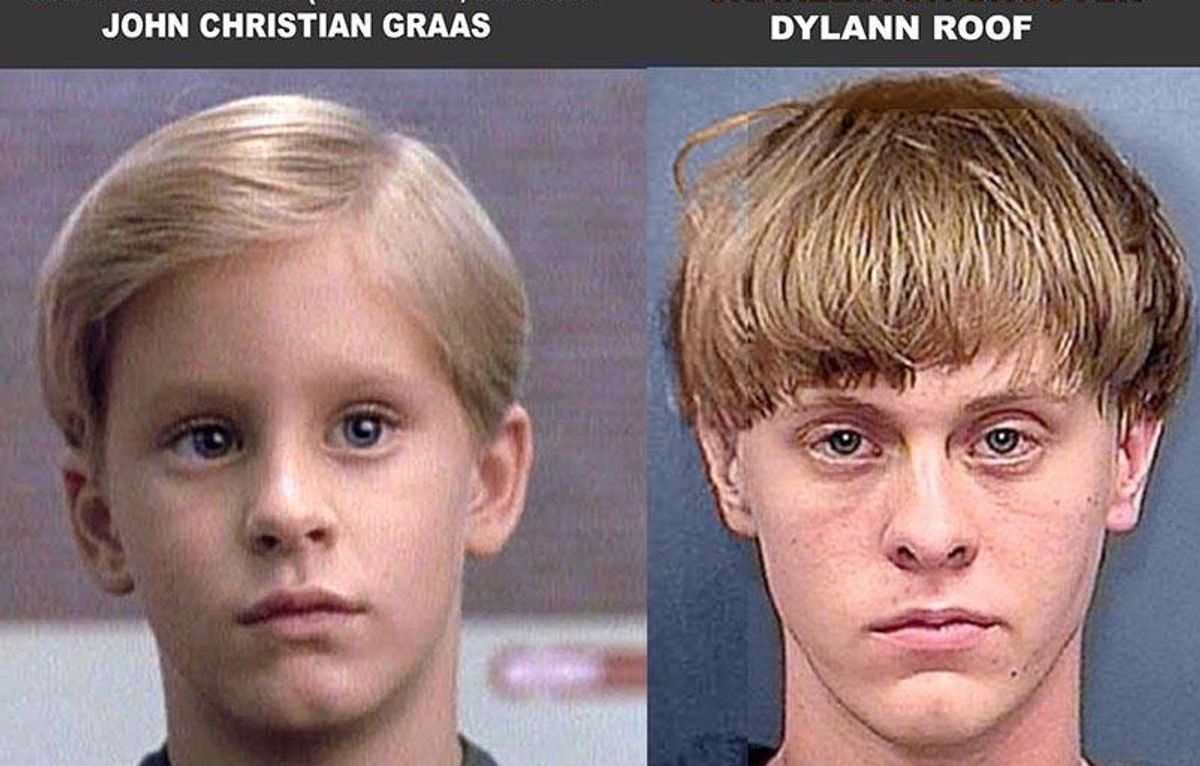 In December 2016, 22-year-old Dylann Roof was convicted on 33 federal hate crimes counts related to the June 2015 Charleston church shooting that left nine people dead. The news of his conviction revived a June 2015 conspiracy theory that the Roof was not who he was claimed to be, but rather was a former child star and crisis actor named John Christian Graas.

A constellation of "crisis actor" rumors widely entered mainstream conspiracy theory after the Sandy Hook school shootings of 2012. Shortly after news of that earlier massacre broke, multiple persons connected to the tragedy (typically family members of dead victims) were accused of being crisis actors (i.e., professional actors supposedly engaged by government agencies and the news media to deceive the public about the reality of allegedly staged (also known as "false flag") events, hired to convincingly portray persons in the throes of trauma and suffering).

After Sandy Hook, iterations of the "crisis actor" claim were attached by online conspiracy buffs to virtually every subsequent mass shooting event, with numerous truthers attempting to "out" these potential "plants" by matching them up with images of persons who had no connection to those events.

The Charleston church massacre took place on 17 June 2015, and in less than a week conspiracy theorists were asserting that accused shooter Dylann Roof was actually John Christian Graas, a former child actor who had appeared in several films and episodes of numerous television series (and who, according to the Internet Movie Database, enlisted as a U.S. Marine in 2010).

One early version of the rumor held:

There’s been tons of speculation in regards to the Charleston shooting rampage.

Was this another False Flag to distract and terrorize the masses?

What would be gained from such an event?

In this video you are about to watch, you will see hard core evidence that the shooter is really 33 year old John Christian Graas, Hollywood child actor and US Marine aviator as of 2010 and on US Marine register as of 2013.

The associated video clip documented only that Graas and Dylann Roof bore a passing resemblance to one another, its "hardcore evidence" hinging on facial similarities between Roof at the time of his 2015 arrest and Graas as a young boy in the early 1990s: (We could find no post-childhood photographs of Graas to use in a more relevant comparison.)

Central to the conspiracy theory was Roof's "bowl" haircut, atypical for a man his age (21 at the time of his arrest) but common for a young boy such as Graas was during his acting career. Roof and the younger Graas both had a similar lip shape, but their noses were not similar, and while Roof appeared to have light green or blue eyes, photographs of Graas looked to depict a boy with dark hazel or brown eyes. (That latter discrepancy was typically shaded by contrasting color photographs of Graas with black-and-white images of Roof.) The shape of Grass and Roof's eyes also visibly differed.

Another glaring hole in the conspiracy involved the respective ages and histories of the two men. While Roof was 21 in the photographs used as a comparison, Graas was at least 33 when the rumors that he was acting the part of shooter "Dylann Roof" first circulated. Roof was not born until April 1994, when Graas was already at the height of his childhood acting career: Graas continued to work steadily through at least 1999, around the time Roof would have been entering kindergarten, and was reported as having enlisted in the Marines in 2010. Roof's early life was thoroughly investigated after the shooting and documented an individual who had been on the grid during that period of time (not a persona that had suddenly been "created" around the time of the Charleston shooting).

In profiles published after the shooting, references to Roof were found in 2008 court papers (related to a parent's divorce) that appeared alongside descriptions of his school records. Childhood friends also placed Roof in the school system and attested to relationships with him years earlier:

But Roof was not the same friend Meek had known from their childhood. Roof always had been quiet, Meek said, but this time he was different.

Meek was one of the first to call law enforcement June 18 [2015] after he saw the surveillance images released of Roof before his capture.

Family members also provided accounts of Roof's early and later life to news outlets, many describing his alarmingly rapid transition from a young man with black friends to someone absorbed by white nationalist sentiments:

The people who know Dylann Storm Roof — the people who watched his progression from a sweet child to a disturbed man — are struggling with guilt. [T]alk to his friends and family, and a portrait emerges of a troubled and confused 21-year-old, often drunk and occasionally threatening as he alternated between partying with black friends and spouting white power slogans to white friends. Court documents and nearly two dozen interviews show Roof's early childhood was troubled and confused as well, as he grew up in an unstable, broken home amid allegations of marital abuse and infidelity.

As a 4-year-old, "He was so sweet and bright," recalls Patricia Hastings, who was once his step-grandmother.

Seventeen years later, she is among many who are trying to figure out what happened to Dylann Roof ... There is little dispute his childhood was difficult ... In an affidavit filed in her 2009 divorce, [Roof's former stepmother Paige Hastings/Mann] said she became a surrogate mother to the children: "I raised [Roof's father's] kids from a very young age, took them to all of their activities."

[Former step-grandmother] Patricia Hastings said her daughter loved Dylann and Amber "unconditionally as her own." She said [biological mother] Amy Roof would leave them in Paige's care with little notice, even though Paige had her own new baby, their half-sister Morgan.

Paige cut Dylann's hair in the bowl cut he still wears; she took Amber to college orientation because "both parents were unavailable," Paige's friend Leslie McArver wrote in an affidavit.

As he grew, Dylann exhibited obsessive compulsive behavior, Hastings said. He would obsess over germs, and insisted on having his hair cut in that same style, Hastings said ... After Paige filed for divorce, Franklin Roof hired a private investigator to shadow her, revealing she was having an affair, according to the court documents ... The divorce was granted in 2009. Hastings recalls that her daughter told her she felt guilty leaving Dylann.

Roof began having trouble in school. He failed the ninth grade twice, then dropped out for good in 2010.

According to Patricia Hastings, recounting [2015] conversations with her daughter, Roof was quieter than he used to be; he looked distant, lost. He was no longer the sweet blond kid she helped raise for nearly a decade. As she was getting ready to leave, Roof, not one for affection, hugged her tight.

"It was like he was saying goodbye," Hastings said ... The next time Mann saw him, it was on television as the man accused of the killings.

Roof's former schools and his school records and acquaintances were also examined and reported on in mid-2015:

[N]othing in the records, and nothing in his friends’ memories, offer a clear explanation to the question haunting South Carolina and the nation: How did the silent young man with no record of violence in his past come to be accused of killing nine people who had gathered to pray?

“When he opened up, you could tell something was wrong at home. He wasn’t at peace,” said Taliaferro Robinson-Heyward, who attended middle school with Mr. Roof. “It wasn’t like he was a mean person, but you could tell he had a darkness to his life.”

The Lexington School District, where Mr. Roof attended fourth, eighth and ninth grades, described him as a “very transient student.”

“I remember him as somewhat shy, and that he never penetrated into the ‘in’ crowd,” said Ted Wachter, the retired principal of Rosewood Elementary School, where Mr. Roof attended fifth grade.

Mr. Robinson-Heyward, who is black, said he saw little evidence of bigotry in the young Dylann. “To me, in the seventh grade, he saw black just as he saw white, you know,” said Mr. Robinson-Heyward ... Another childhood friend, Caleb Brown, recalled a class assignment that required students to go home and ask about their heritage ... With a child’s inquisitiveness, Mr. Roof asked his mixed-race friend, who had darker skin and curly hair, about his background and learned that Mr. Brown’s father was black.

“That didn’t change his behavior toward me,” Mr. Brown said in an interview.

The boys became friends at the behest of their mothers, having sleepovers, skateboarding and playing Nascar racing video games. Mr. Brown recalled Mr. Roof’s mother being welcoming and tolerant of all of races.

“He wasn’t the most popular kid, but he wasn’t upset about that,” Mr. Brown said ... Several of Mr. Roof’s friends said he often complained that his father put him to work landscaping. Even in his youth, Mr. Roof began to exhibit a greater interest in smoking grass than cutting it. At 13, [in approximately 2007] his mother caught him spending $50 he had earned landscaping on marijuana, Ms. Konzny said ... family turmoil took place at about the time Mr. Roof was entering ninth grade in Lexington. School records show he repeated the grade, completing the last three months of his second stint of ninth grade back in Columbia, in 2010.

Visual evidence presented to bolster the theory that Dylann Roof was child actor John Christian Graas was extremely weak, consisting largely of cherry-picked images showing Roof's child-like haircut contrasted with that of an actual child. But the details of Roof's childhood (which differ substantially from those of the much-older John Christian Graas) are far more more compelling evidence against the "crisis actor" theory than shaky picture comparisons are evidence for it.