President Dwight D. Eisenhower's racial background has sparked a number of long-circulating rumors, but there's no compelling evidence behind such claims. 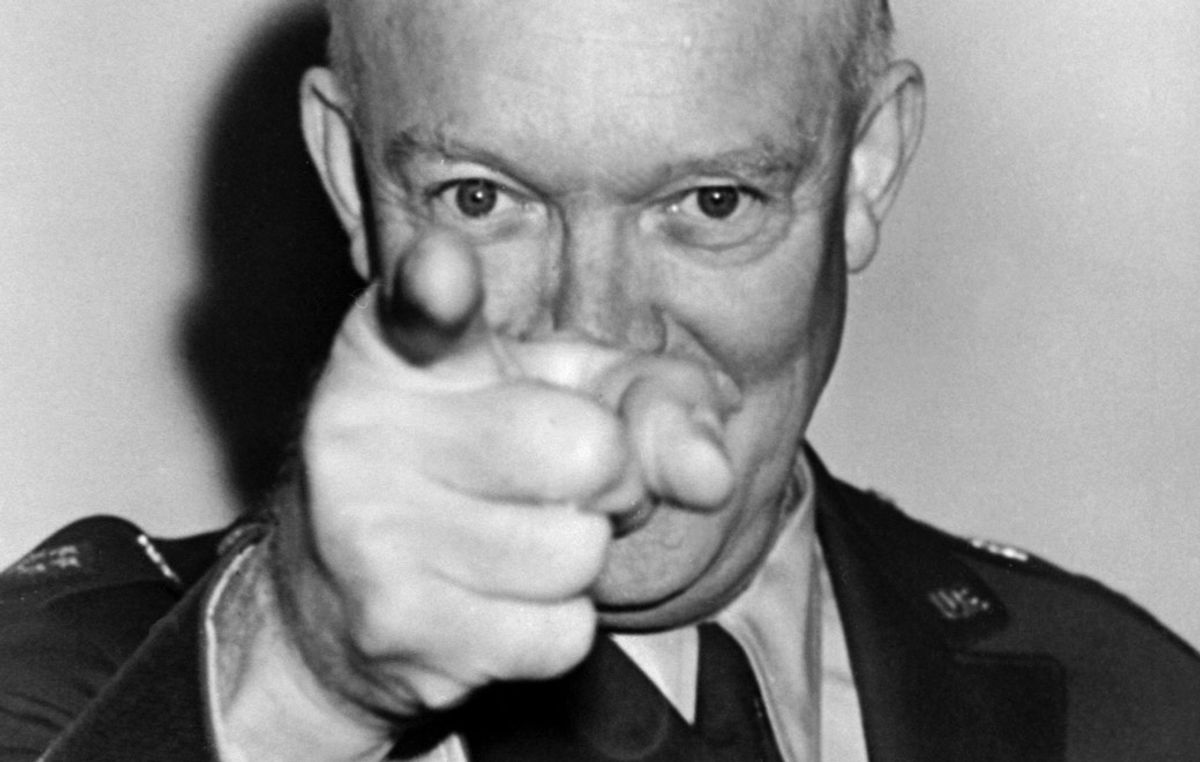 In 2015, a number of social media posts and email forwards made their way to Snopes HQ:

This has been on Facebook since at least August 2015, claiming Eisenhower's mother was of mixed ancestry (using offensive term "mulatto"). A brief review of some sources turned up no evidence, though her family was mixed generations before. Strictly speaking, this would not make her a "mulatto" woman as claimed.

There is a post on facebook that says Dwight Eisenhower's (34th President)mother was a mulatto named Ida Stover. Ida Stover is his mother but was she a mulatto? There for Obama is not the first Black president. Was she mulato? On 27 August 2015 a Facebook user shared the above-reproduced image, claiming that the mother of President Dwight D. Eisenhower was an "orphaned mulatto woman named Ida Stover." Although the claim was novel to many social media users, questions about Eisenhower's racial background were not: for example, an 8 January 2004 New York Times article titled "Surprises in the Family Tree" examined why the topic of race and ancestry is sometimes complicated across American history:

"Most of the workers in colonial America in the 17th and early 18th centuries were indentured servants, white and black," said Dr. John B. Boles, a professor of history at Rice University in Houston and the editor of "The Blackwell Companion to the American South" (2001). Since there was not a clear distinction between slavery and servitude at the time, he said, "biracial camaraderie" often resulted in children. The idea that blacks were property did not harden until around 1715 with the rise of the tobacco economy, by which time there was a small but growing population of free families of color. Dr. Boles estimated that by 1860 there were 250,000 free black or mixed-race individuals

The article only briefly mentioned Eisenhower and Stover, in a manner that referenced the rumor without providing conclusive detail:

It is incontrovertible that America is a multiracial society, from the founding father Alexander Hamilton (the son of a mixed-race woman from the British West Indies) to Essie Mae Washington-Williams, 78, a retired schoolteacher, who, the late Senator Strom Thurmond's family [has] acknowledged, is his daughter. And for decades there have been questions about the possible mixed-race ancestry of Ida Stover, Dwight D. Eisenhower's mother.

According to that article, there were merely "questions" about Stover's racial ancestry (which had lingered for "decades," seemingly without answer). Wikipedia also addresses the rumor on a page titled "African-American heritage of United States presidents," where Eisenhower is listed under presidents with unverified claims of African ancestry, alongside Thomas Jefferson, Andrew Jackson, Abraham Lincoln, Warren G. Harding, and Calvin Coolidge. The page is prefaced with a note that the claims originated primarily with "amateur historians," were not "verified by reliable sources in peer-reviewed publications," and that "[m]ainline historians do not support these claims":

The academic consensus of historians is that no president other than Obama has had recent (from the colonial period in U.S. history or after) African ancestry; it rejects claims to the contrary.

The Times' 2004 article was published well before the candidacy of Barack Obama, but rumors of Eisenhower's purported African roots predictably surfaced alongside Obama's then-burgeoning campaign. A 5 February 2008 Pittsburgh-Post Gazette article emphasized that such claims were not considered credible by historians and geneologists:

In addition to Jefferson, the books, magazines and newspaper articles found on the Web name five other U.S. presidents who may have had black ancestry, but never publicly acknowledged it: Andrew Jackson, Abraham Lincoln, Warren Harding, Calvin Coolidge and Dwight D. Eisenhower. Van Hall, associate professor of history at the University of Pittsburgh, said it is unlikely that most of the men on the list had black ancestry because historians know their genealogy pretty well.

While he concedes he hasn't researched the issue, Larry Glasco, also an associate professor of history at Pitt, is also skeptical of the stories.

"I would guess if [the stories] were really true we'd have heard a lot more about them," Dr. Glasco said. "There would have been a lot more written about them in professional research literature."

Another portion of that 2008 article noted that the claims should be simple to resolve, given recent advances in genetic mapping technology:

[Russell Riley, presidential scholar at the University of Virginia's Miller Center of Public Affairs] said with today's DNA mapping techniques it would be easy to prove or disprove these claims.

There was no such thing as DNA mapping when the late historian J.A. Rogers wrote his book, "Five Black Presidents," self-published in 1965, which serves as the basis for most of the more recently published works on the subject.

The set of larger rumors (mentioning but not focusing on Eisenhower) were addressed again by NPR in a June 2008 segment titled "Has America Already Had a Black President?" which primarily explored the reasons behind (and not the credibility of) such rumors. The election of President Obama predictably reinvigorated the rumors, and a 5 November 2008 Emporia Gazette article described the claims as comprising mostly visual evidence (i.e., photographs of Ida Stover) and gaps in her family tree:

“The rumor was his dad was mixed, coming out of Africa,” [Emporia State University sociology professor Nate] Terrell said. "But his mother, Ida (Elizabeth) Stover Eisenhower, was mulatto. And when I show people pictures of her they say, 'Oh well, we can tell. Just by looking at mom, we can tell she was mixed.'"

The photograph reputed to be of Eisenhower’s mother and father was published by the Pittsburgh Post-Gazette, in conjunction with several articles run on the subject of black presidents. Although [Dr. Leroy] Vaughn does not assert that Eisenhower was of mixed ancestry, his 2006 book, "Black People and Their Place in World History" states there may have been five black U.S. Presidents, according to the online news, The Daily Voice, Black America's Daily News Source. Elsewhere on the internet, an undated page on the web site FrenchCreoles.com presented the same shallow reasoning: that Ida Stover visually appeared to be biracial, and her ancestry was not well-documented. Moreover, the site asserted that one family name (Link, which is not an uncommon surname) was common among both white and black families:

While the more "mainstream" historians remain skeptical, these type of allegations garner the most interest among African Americans primarily because they recognize all the possibilities of truth in the assertions. Most all seem to agree that our nation's 34th president Dwight Eisenhower and Warren G. Harding, our 29th U.S. president, are the most likely candidates. It is said that Eisenhower's mother, Ida Elizabeth Stover Eisenhower was a woman of color.

Something about a mysterious maternal grandfather who carried the surname of Link, and there being only two Links families in the Virginia town they originated in — a black one and a white one. And something about interviews conducted with elderly area blacks during the 1950's who long remembered the references to Eisenhower's mother as "that black Links gal". But perhaps the evidence that raised the proverbial eyebrow was the 1885 wedding day photograph of the president's parents which many say is all the evidence they need

Here's the problem: In Mount Sidney to this day there are both black families and white families with the surname "Link." Many years ago, a black researcher discovered that Ida's mother was from the black Links, a fact washed away in time by two things:

1. Her mother died when she was five years old.

2. She went to live with a white family after.

3. She moved to Kansas while in her teens.

4. She married a white man.

While rumors about President Eisenhower's purportedly mixed-race maternal lineage became more popular during and after the election of President Obama, the claims remain unsupported and unsubtantiated. The primary sources for the claim were a 50-year-old self-published book and many decades of repetition, while substantive evidence for the assertion hinged largely on Ida Stover's 1885 wedding photograph (which many viewers believed hinted at a mixed racial lineage) as well as the concurrent existence of black and white families with the surname Link in her hometown during her youth.

Neither source was a convincing evidentiary finding, and in the time since the rumors began, the advancement of DNA research has made it fairly easy to resolve such questions. To date, no one has conclusively proved President Eisenhower wasn't part black, but neither has anyone presented any clear evidence affirming he was.