Did an AR Dragon Fly Over a Baseball Stadium?

Some viewers may be a little confused about what this video does and doesn't show. 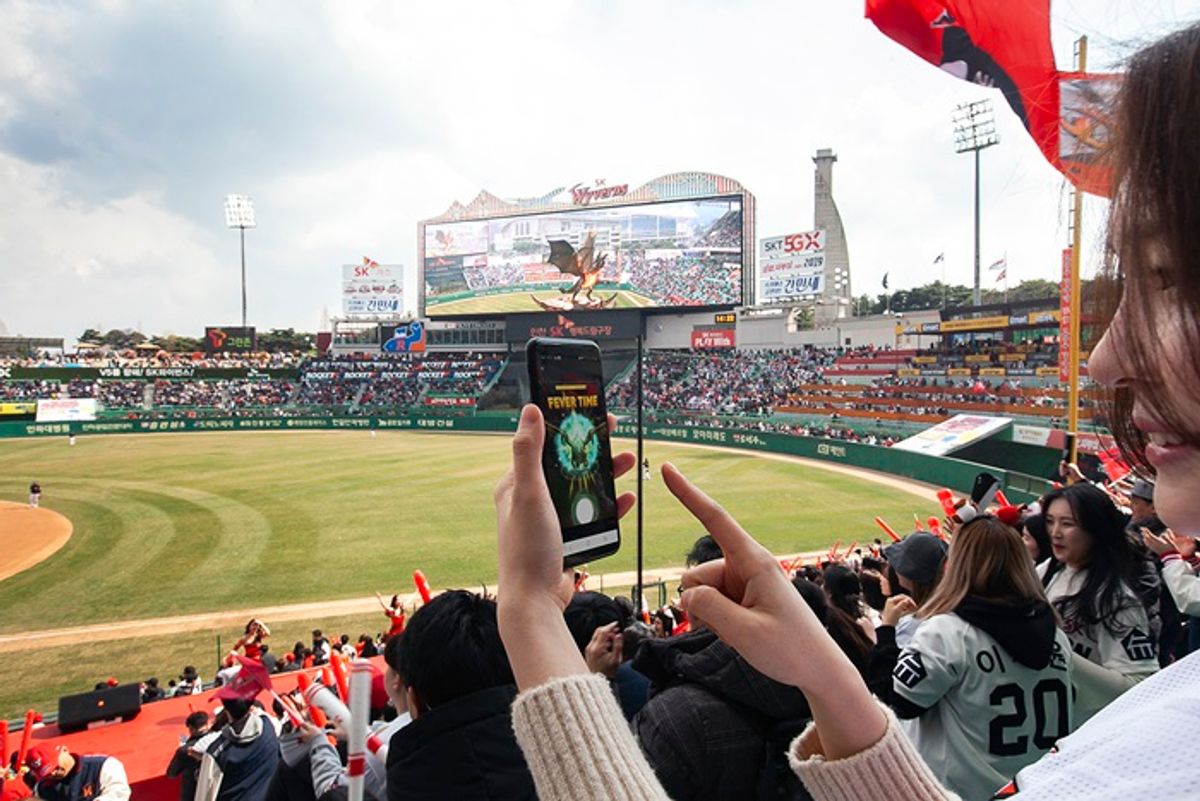 Sports fans were able to see a large, fire-breathing dragon flying over a baseball stadium via their telephones, TV screens, and the team's large LED scoreboard.

This computer-generated dragon was not visible to the naked eye.

A video of a large, augmented-reality, fire-breathing dragon flying over a baseball stadium is frequently shared on social media. While viewers were undoubtedly aware that this footage didn't actually show a real mythical creature's visit to a ball game, some social media users seemed a bit confused about what this video actually showed. Is it a hologram? CGI? Virtual reality?

At the opening of the South Korean baseball championship they used a 3D hologram using 5G technology. Realistic Dragon flew over the stadium.
Just unbelieveble!!! pic.twitter.com/y3jR64aXXB

This video shows an augmented reality (AR) dragon. AR, which refers to technology that mixes the real world with computer-generated (CGI) images, is different from virtual reality (VR), the use of computer technology to create a simulated environment. Unlike a hologram, the CGI objects can only be seen via some sort of screen:

According to information from Live Science and The Franklin Institute, respectively:

Augmented reality is the result of using technology to superimpose information — sounds, images and text — on the world we see. Picture the "Minority Report" or "Iron Man" style of interactivity.

Augmented reality (AR) is one of the biggest technology trends right now, and it’s only going to get bigger as AR ready smartphones and other devices become more accessible around the world. AR let us see the real-life environment right in front of us — trees swaying in the park, dogs chasing balls, kids playing soccer — with a digital augmentation overlaid on it. For example, a pterodactyl might be seen landing in the trees, the dogs could be mingling with their cartoon counterparts, and the kids could be seen kicking past an alien spacecraft on their way to score a goal.

In other words, this dragon didn't actually "fly over" this stadium. It was only viewable via a screen.

This video was created by the company SK Telecom for the SK Wyverns' opening day (a wyvern is a "winged two-legged dragon with a barbed tail") of the 2019 Korean Baseball Organization season. The dragon was visible on the stadium's large LED screen and home televisions. While the people at this game couldn't see this dragon with the naked eye, they were able to see this mythical beast via their phones.

Korea.com reported that fans could also interact with the dragon by pressing the "cheer button" on a smartphone app:

An image of the team's mascot was shown on the world's largest LED baseball scoreboard at the stadium. In addition, the flying creature put on an interactive performance when fans pressed the cheer button on a smartphone app. Fans who watched the event on TV or their smartphones could also see this high-tech spectacle. For the wyvern's performance, SK used its self-developed AR and virtual reality (VR) technologies such as eSpace, a hyperspace platform for replicating the real world in cyberspace, and T real Platform, which enables AR content to be freely created and shared. The use of the latest 5G wireless technology also allowed large-scale AR streaming.

A second video of this augmented reality dragon was posted to the SK Telecom YouTube page. That video shows fans downloading this app and interacting with the dragon via their phones:

In November 2019, a similar video supposedly showing a "hologram" lion roaring at stadium in Argentina went viral on social media:

Again, this was not a hologram visible to the naked eye, but an augmented reality display that could only be seen on screens.