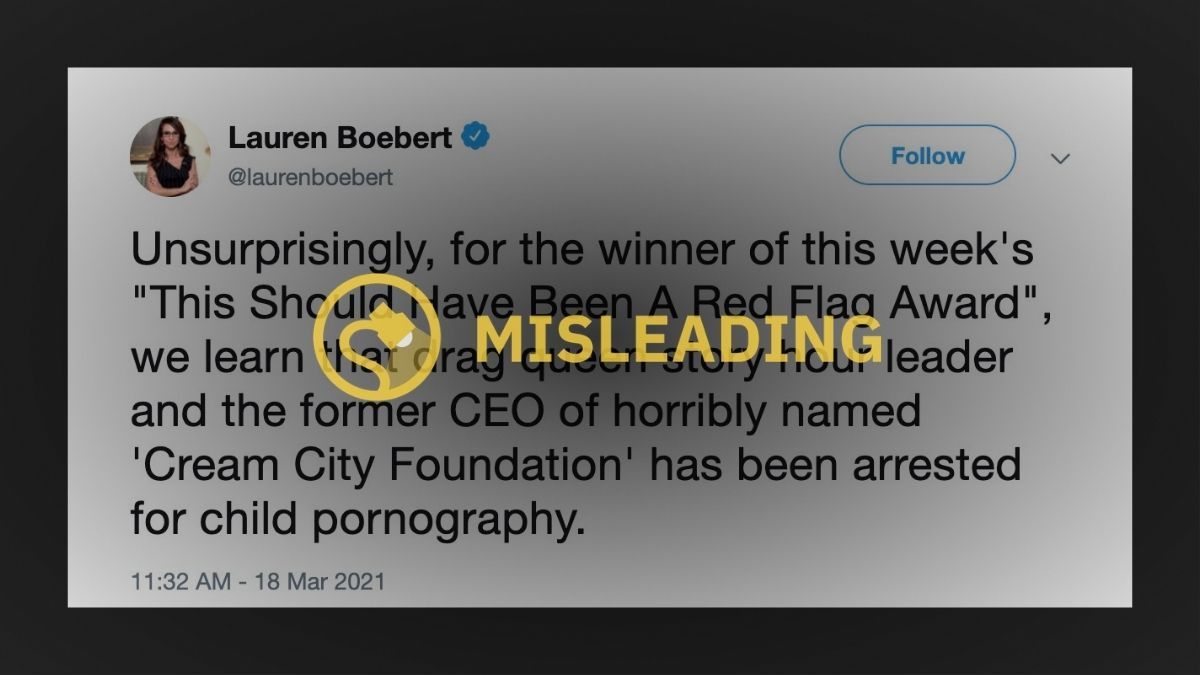 Boebert's tweet read: "Unsurprisingly, for the winner of this week's 'This Should Have Been A Red Flag Award', we learn that drag queen story hour leader and the former CEO of horribly named 'Cream City Foundation' has been arrested for child pornography."

For additional context, "Cream City" is a nickname for Milwaukee, which is a reference to the cream color of bricks used to build the city's historic buildings.

We explain below why these headlines and claims are misleading.

What is Drag Queen Story Hour?

Drag Queen Story Hour (DQSH) is a national organization with chapters in various cities that organizes events where drag queens read books to kids. The events are often held in public libraries, bookstores, and schools, and they are sometimes the focus of conservative groups' protests.

The aim of these events is to give children "glamorous, positive, and unabashedly queer role models. In spaces like this, kids are able to see people who defy rigid gender restrictions and imagine a world where people can present as they wish, where dress up is real," per the organization's website.

Who is Brett Blomme?

Blomme's arrest no doubt made headlines in part because he had been elected to serve as a Milwaukee County circuit court judge in August 2020. According to local news reports, Blomme served as a judge in the county's Children's Court.

Prior to his election to serve as a judge in Milwaukee, Blomme held various positions of public trust. He worked as an assistant city attorney for the city of Madison and as an attorney in the Wisconsin Public Defender's office, according to his LinkedIn profile. He also held two positions with local charities, the AIDS Resource Center of Wisconsin and Cream City Foundation.

Blomme never had a leadership position with either Drag Queen Story Hour's national organization or its Milwaukee chapter.

According to his LinkedIn page, Blomme was the president and CEO of the Cream City Foundation from July 2017 until August 2020, leaving that post when he was elected to serve as circuit court judge.

Cream City Foundation is a Milwaukee-based LGBTQ advocacy nonprofit organization that offers grants and scholarships. Its current president and CEO is Gary Balcerzak, who took the post when Blomme left in August 2020.

According to Jonathan Hamilt, the executive director Drag Queen Story Hour's national umbrella organization, Cream City Foundation acted as a fiscal sponsor to DQSH's Milwaukee chapter so that the group could give and receive money as a nonprofit organization. However, Hamilt said, DQSH Milwaukee operates as a separate entity.

"Brett has never held a title or position within our organization ever," Hamilt added.

We reached out to Cream City Foundation for comment but didn't receive a response in time for publication. We will update this story if we hear back.