It can be a mistake to place much trust in brand-new Twitter accounts. 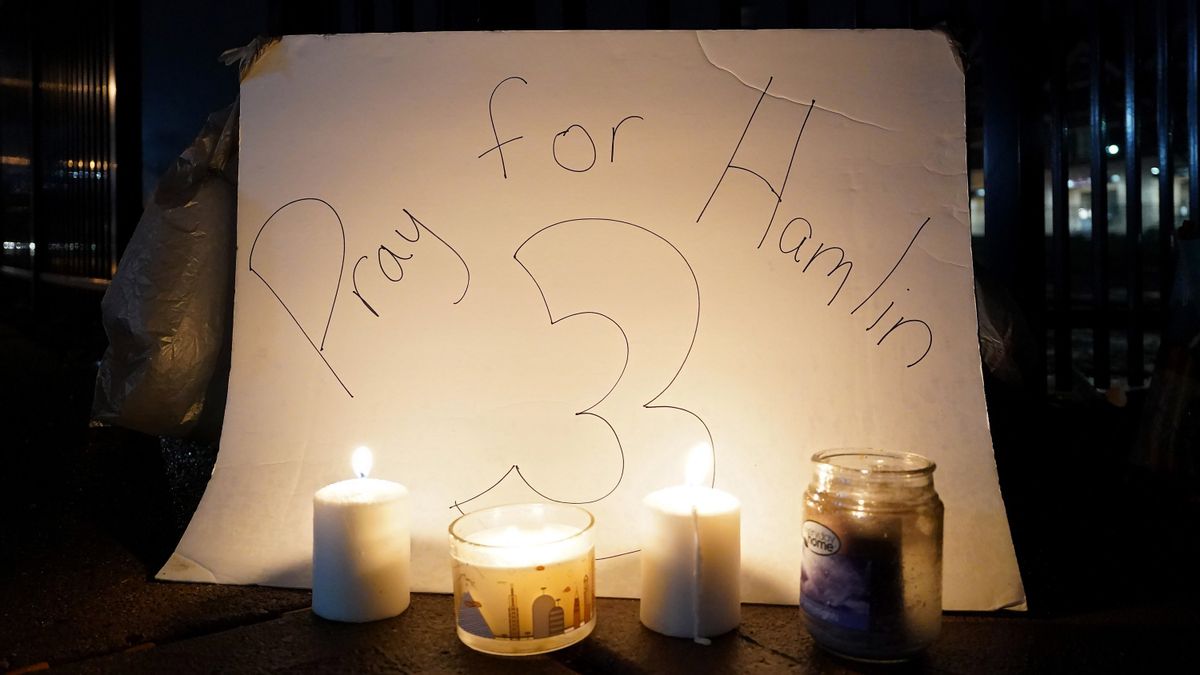 A vigil is displayed at the University of Cincinnati Medical Center for football player Damar Hamlin on Jan. 03, 2023, in Cincinnati, Ohio. (Photo by Dylan Buell/Getty Images)
Previous Article
Next Article
Article 3 of 3 in Collection

Related: Did CDC Confirm That Thousands 'Died Suddenly' As a Result of COVID Vaccines?

On Jan. 2, 2023, Hamlin collapsed on the field during Monday Night Football, which led to the postponement of the Bills' matchup with the Cincinnati Bengals. The game was being played in Cincinnati.

According to The Associated Press, Hamlin's heart stopped and he was still in critical condition as of the next day. He was being cared for at the University of Cincinnati Medical Center.

Here's where the conspiracy theory comes in: A tweet purportedly sent by a "Dr. Benjamin Eidelman" claimed that just days before, Hamlin had received a COVID-19 booster shot. A great deal of misinformation has gone around purporting to connect instances of athletes collapsing and even dying during sporting events to COVID vaccines.

A screenshot of a purported tweet from someone named "Dr. Benjamin Eidelman" was shared online soon after Hamlin's collapse. The account associated with that tweet has since disappeared. It did not show signs of having been suspended, as accounts that Twitter suspends for terms of service violations usually display an "account suspended" message. Rather, the page on which the account previously resided showed the words, "This account doesn't exist." This appeared to mean the account was removed by the user.

The tweet in the screenshot read as follows: "I recently administered Damar Hamlin's Covid booster on 12/26, and as a medical professional, I can assure the public he passed all screenings with flying colors. I am in contact with the UCMC staff and will provide any assistance to them."

We found that the screenshot was shared by @catturd2 on Twitter, the right-wing blog The Gateway Pundit, and at least two times on the r/conspiracy subreddit on Reddit. All these sources expressed skepticism about the veracity of the tweet. 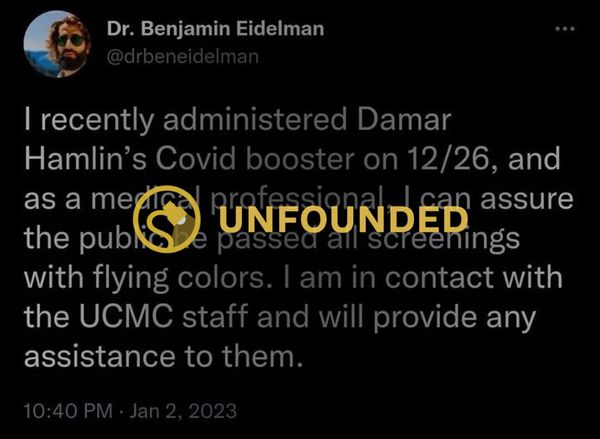 We, too, found multiple reasons to doubt its veracity.

Second, the official medical information for Hamlin's condition that was released by the Bills said nothing about COVID-19 or any vaccines at all.

Third, and perhaps most glaring, the @drbeneidelman Twitter account was brand new. According to an archived capture on the Internet Archive's Wayback Machine, the account was created in December 2022. The first known activity showed up on Dec. 17. This meant that the account was only two weeks old by the time the tweet screenshot made the rounds.

Fourth, we found only one person online with the name Dr. Benjamin Eidelman. He was listed as a neurologist in Jacksonville, Florida, and is a much older-looking gentleman than the person pictured in the Twitter profile picture for @drbeneidelman. The Florida doctor appeared to simply have the same name as the likely-bogus Twitter account.

There are more reasons to doubt that the tweet was real, such as the existence of medical privacy laws limiting what information health care providers can share about their patients, and the fact that there is no evidence nor any logical reason to believe that Hamlin was ever a patient of a Dr. Benjamin Eidelman.

At its most base level, we don't recommend blind trust in tweets supported by zero sources or evidence of any kind.

We will update this story if any further information becomes available.

Previous Article
Next Article
Article 3 of 3 in Collection