Did the 'Doomsday' Seed Vault Flood Due to Global Warming?

Although melting permafrost did cause flooding in the access tunnel to the vault, the vault itself was not breached and the seeds were not threatened or harmed. 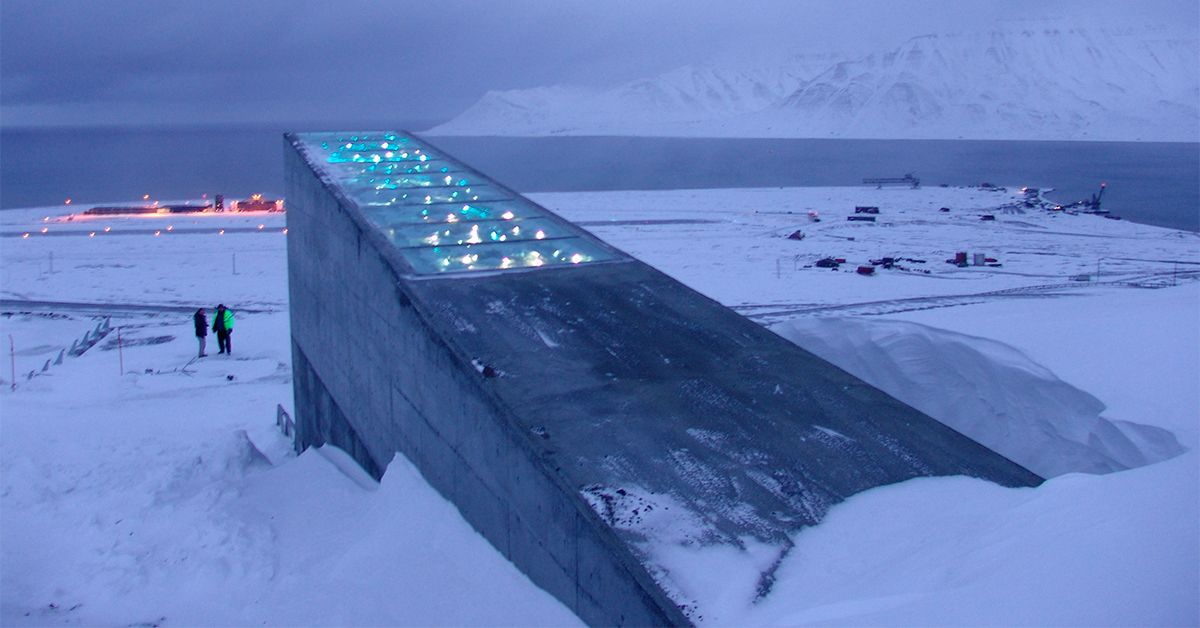 Melting permafrost did flood the access tunnel to the vault.

The vault itself was never breached, and the seeds were never threatened.

Built deep into the interior of a remote arctic island in Norway’s Svalbard archipelago quietly lies what the press has dubbed the "Doomsday Vault".

First opened in February 2007 and run by the Norwegian Government, the Nordic Genetic Resource Centre, and the nonprofit Crop Trust, its goal is to maintain a stockpile of seeds as a bulwark against extinctions and potential future agricultural calamities:

Permafrost and thick rock ensure that the seed samples will remain frozen even without power. The Vault is the ultimate insurance policy for the world’s food supply, offering options for future generations to overcome the challenges of climate change and population growth. It will secure, for centuries, millions of seeds representing every important crop variety available in the world today. It is the final back up.

On 19 May 2017, Crop Trust reported that technical issues had resulted in flooding to the facility’s access tunnel:

After 9 years of operation, Svalbard Global Seed Vault is facing technical improvements in connection with water intrusion in the outer part of the access tunnel because the permafrost has not established itself as projected.

This story was propagated across social media with irresistibly shareable headlines like: "The Arctic Doomsday Seed Vault Flooded. Thanks, Global Warming", leaving the impression that the supposedly failsafe vault had been ruined by one of the very forces it sought to protect against — and after less than a decade of use. This spin is not entirely accurate, however, as the vault itself was never threatened.

It has been reported that the Seed Vault has seen water intrusion due to melting permafrost. The Royal Ministry of Agriculture and Food in Norway, the Crop Trust, and NordGen would like to assure seed depositors and the public that the seeds are completely safe and no damage has been done to the facility. The Royal Ministry of Agriculture and Food and Statsbygg, Norway, is taking appropriate measures to ensure the protection of the Seed Vault and improve the construction to prevent future incidents. Globally, the Seed Vault is, and will continue to be, the safest backup of crop diversity.

While the access tunnel was flooded, there are a number of other protective barriers between that tunnel and the actual vault, as described in a Time.com profile of the facility from April 2017:

The entrance leads to a small tunnel-like room filled with the loud whirring noise of electricity and cooling systems required to keep the temperature within the vault consistent. Through one door is a wide concrete tunnel illuminated by strip lighting leading 430 ft. down into the mountain. At the end of this corridor is a chamber, an added layer of security to protect the vaults containing the seeds.

There are three vaults leading off from the chamber, but only one is currently in use, and its door is covered in a thick layer of ice, hinting at the subzero temperatures inside. In here, the seeds are stored in vacuum-packed silver packets and test tubes in large boxes that are neatly stacked on floor-to-ceiling shelves.

As described by the Guardian, it was this wide concrete tunnel that was breached:

“A lot of water went into the start of the tunnel and then it froze to ice, so it was like a glacier when you went in,” [Hege Njaa Aschim, a Norwegian government spokesperson], told the Guardian. Fortunately, the meltwater did not reach the vault itself, the ice has been hacked out, and the precious seeds remain safe for now at the required storage temperature of -18C.

2016 was an especially hot year for the Arctic, and the Spitsbergen Island had average temperatures regularly approaching temperatures 13ºF (7ºC) higher than normal. This allowed the deep permafrost the vault was built into — selected in part because its presence provides a free source of refrigeration — to melt more than usual.

Crop Trust has stated that they remain confident in the ability of the Vault in the future, and that they are implementing improvements to protect against similar events:

The vault managers are now taking precautions, including major work to waterproof the 100m-long tunnel into the mountain and digging trenches into the mountainside to channel meltwater and rain away. They have also removed electrical equipment from the tunnel that produced some heat and installed pumps in the vault itself in case of a future flood.

Speaking to the Guardian, Åsmund Asdal of the Nordic Genetic Resource Centre said:

We have to find solutions. It is a big responsibility and we take it very seriously. We are doing this for the world.