Urban legend about an airline pilot who inadvertently makes risqué comment over an open microphone. 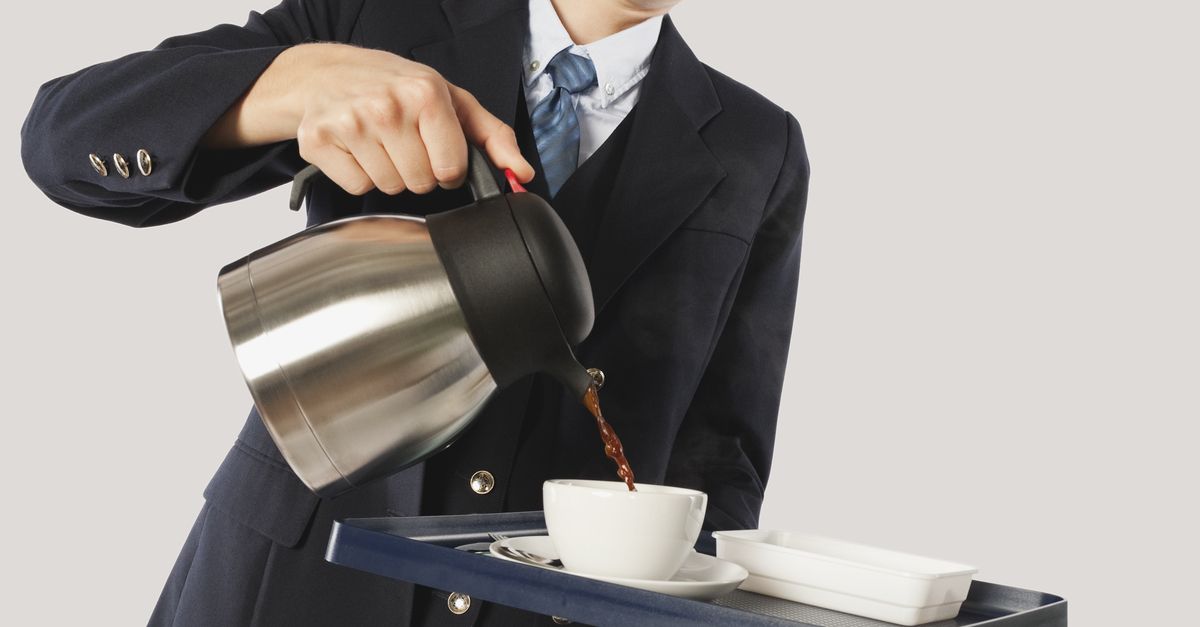 Image Via unedIn by Westend61 / Shutterstock

Claim:
An airline pilot who inadvertently made a risqué comment over an open microphone.
Rating:

In one venerable urban legend, an airliner encounters a particularly rough patch of turbulence, and the captain comes on the intercom to reassure the passengers that everything is okay and that the flight should be smooth one the rest of the way. He forgets to turn off the intercom after his announcement, however, and everyone in the passenger cabin hears his subsequent comment to the co-pilot: "Boy, I sure could use a blow job and a cup of coffee right about now!" As a flight attendant frantically rushes up the aisle towards the cockpit to warn the captain that his microphone is open, a waggish passenger calls out after her, "Don't forget the coffee!"

Here are the various forms in which this tale has been presented over the years:

To inaugurate a jet-passenger service, an airline invited a number of VIP's to take the first flight. After the trip was under way, the guests were surprised to hear the pilot's voice coming over the intercom. "Say, honey," he said, "how about bringing me a cup of coffee and lots of love?"

The embarrassed hostess, realizing that the pilot had flipped the public intercom switch instead of the one that she alone could hear, raced up the aisle to his cabin. Just as she was about to enter it one of the VIP's called to her. "You forgot the coffee, honey," he said.

A friend of a guy in the Nutrition School at Tufts was one of the lucky passengers on board a Northwest Airlines flight to Boston during our recent hurricane "Bob". The captain did his best to skirt the edge of the storm, but it was a pretty rough ride just the same - rough enough that the flight attendants were ordered to strap themselves into their seats for about half an hour, and many of the passengers were putting the little plastic-lined bags in their seat pockets to good use. When the turbulence finally abated, the flight attendants unbuckled themselves, and the captain's voice came on over the intercom: "Well, folks, that was quite some ride, wasn't it? But we came through it fine, just the way we always do, and I'm happy to report that it looks like the remainder of our trip should be much calmer. On behalf of myself and today's flight crew, I'd like to thank you very much for your calmness and cooperation, and extend our best wishes for a pleasant stay in Boston."

After a short pause and several clicks:

"Jesus Christ - whadda bitchin' ride. Boy, I sure could use a cup of good strong coffee and a blow job, right about now."

As a stricken stewardess dashed up the aisle to the cabin to inform the captain that his intercom was still on, one of the passengers called after her, "Don't forget the coffee!"

This joke-cum-legend offers a healthy dose of male chauvinism in featuring that classic object of male sexual fantasies, the comely female servant. (Live-in domestic help being a rarity these days, flight attendants are the nearest contemporary equivalent of the "French maids" men lusted after in days of yore.) Though the airlines may have limits on exactly which passenger needs flight attendants should satisfy, pilots are important people who regard these hard-working women as mere objects whose purpose is to cater to their every whim, this joke tells us.

A humorous story that started out as a joke, this legend has changed with the times, as the two versions above demonstrate. The earlier version is bit of good-natured — if sexist — fun, employing the common motif of embarrassing private thoughts accidentally broadcast over an open microphone. Since then, it has assumed a much more crude and demeaning form.

Sightings:   Look for this one in the 1997 film Good Will Hunting.