Was Donald Trump the First President Since 1991 to Speak at the Future Farmers of America Convention?

A meme got the basic facts right about President Trump's visit to Indianapolis in October 2018. 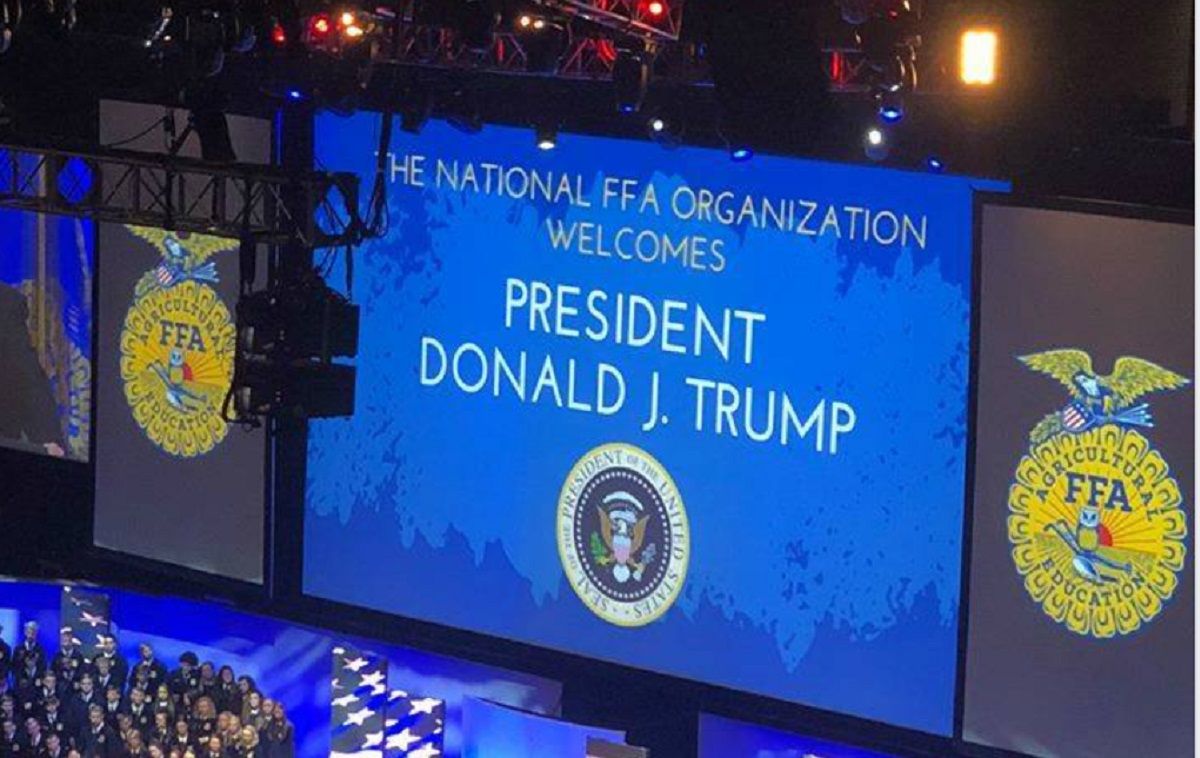 The last president to address the national FFA convention in person was George H.W. Bush in November 1991.

The meme did not mention other kinds of engagement with the FFA by other presidents since 1991, especially that of George W. Bush, who invited FFA members to the White House on several occasions and spoke at the Pennsylvania FFA convention in 2005.

In October 2018, a meme emerged on social media that claimed President Donald Trump had been the first sitting U.S. president since 1991 to accept an invitation to speak at a national gathering of young farmers.

"Your time in the FFA, in the field, on the farm, on the land and in the classroom has not only prepared you for a stellar, great career in something you love, it's taught you essential truths about life and about the world in which we live. You know that success only comes through hard work and perseverance."

President Trump did indeed deliver remarks at the Annual Future Farmers of America (FFA) Convention on 27 October 2018, which took place at Bankers Life Fieldhouse in Indianapolis, Indiana, and the quotation included in the meme was mostly accurate. A full transcript of President Trump's speech can be found here, and the section quoted in the meme can be viewed in the following video:

It's true that, before President Trump, the last sitting president to physically attend and speak at the national FFA convention was George H.W. Bush in 1991, and the FFA does invite the current president to each year's convention.

However, the meme left out other forms of engagement between U.S. presidents and the FFA in the intervening 27 years, such as George W. Bush's attendance at a state-wide FFA convention in 2005.

Presidents at the FFA convention

In response to our inquiries, a spokesperson for the FFA confirmed by email that "We invite the sitting president every year." In a statement, the organization outlined the tradition of White House engagement with the annual event:

It has become a tradition of the National FFA Organization to invite the sitting president to make remarks during our national convention and expo. Former President Harry S. Truman spoke in 1957. Presidents Gerald Ford and Jimmy Carter spoke in 1974 and 1978 respectively.

We consulted news and photographic archives, C-SPAN archives, some of the archives of the FFA itself, as well as the American Presidency Project at the University of California, Santa Barbara.
Including the speeches and pre-recorded videos mentioned by the FFA in its statement, we found the following instances of significant White House engagement with FFA conventions and the FFA since 1991:

Although these gestures should not be ignored or omitted from the record, they don't rise to the same level as a sitting president's personally attending the national convention and delivering a speech in person, and the meme is quite right in its central claim that before President Trump's speech in Indianapolis in October 2018, the last president to make a gesture of such significance was President George H.W. Bush in 1991.