Sometimes it's difficult distinguishing which tweets are real and which are fake. 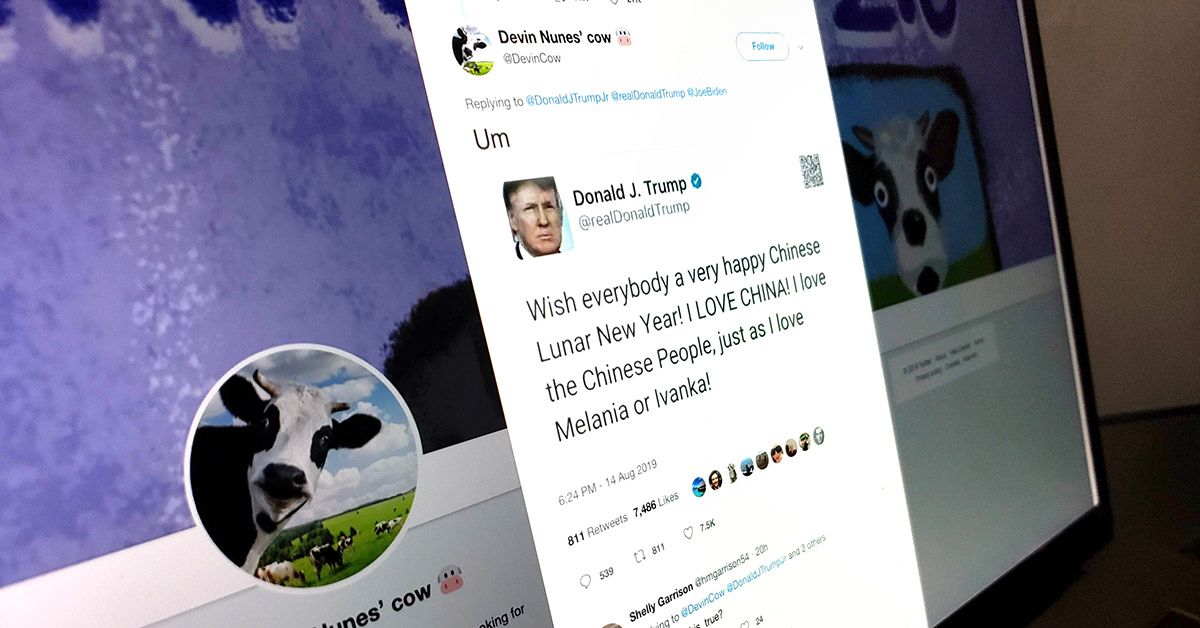 Claim:
U.S. President Donald Trump tweeted that he loves the Chinese people "just as I love Melania or Ivanka!"
Rating:

The social media environment in 2019 proved so surreal at times that some people struggled to distinguish which extreme statements were authentic and which were pranks or hoaxes.

One such event occurred in mid-August 2019, when a Twitter user impersonating a fictional cow owned by U.S. Rep. Devin Nunes, R-Calif., posted an apparently fake tweet attributed to one of the platform's most prolific users, President Donald Trump.

Trump has tweeted outlandish or inscrutable comments in the past, perhaps prompting some to question whether he authored the above tweet (we've cropped out the user's name for privacy purposes).

It is not true. Not only did the "cow" later answer to the negative, but if readers are ever in doubt, they can search the Trump Twitter Archive, which stores all of Trump's tweets, even deleted ones.

The fake tweet was posted in a response to a statement published on the platform by Trump's eldest son, Donald Trump Jr., who claimed his father has long been "standing up to" China. The fake tweet played off remarks Trump has made in the past extolling the beauty of his daughter Ivanka that some have said they consider distasteful.

Estepa, Jessica. "Covfefe, One Year Later: How a Late-Night Trump Tweet Turned Into a Phenomenon."   USA Today. 31 May 2018.