Did Donald Trump Jr. Tell Conservatives Following the Bible Had 'Gotten Us Nothing'?

The son and adviser of the former president continued to cause controversy in December 2021. 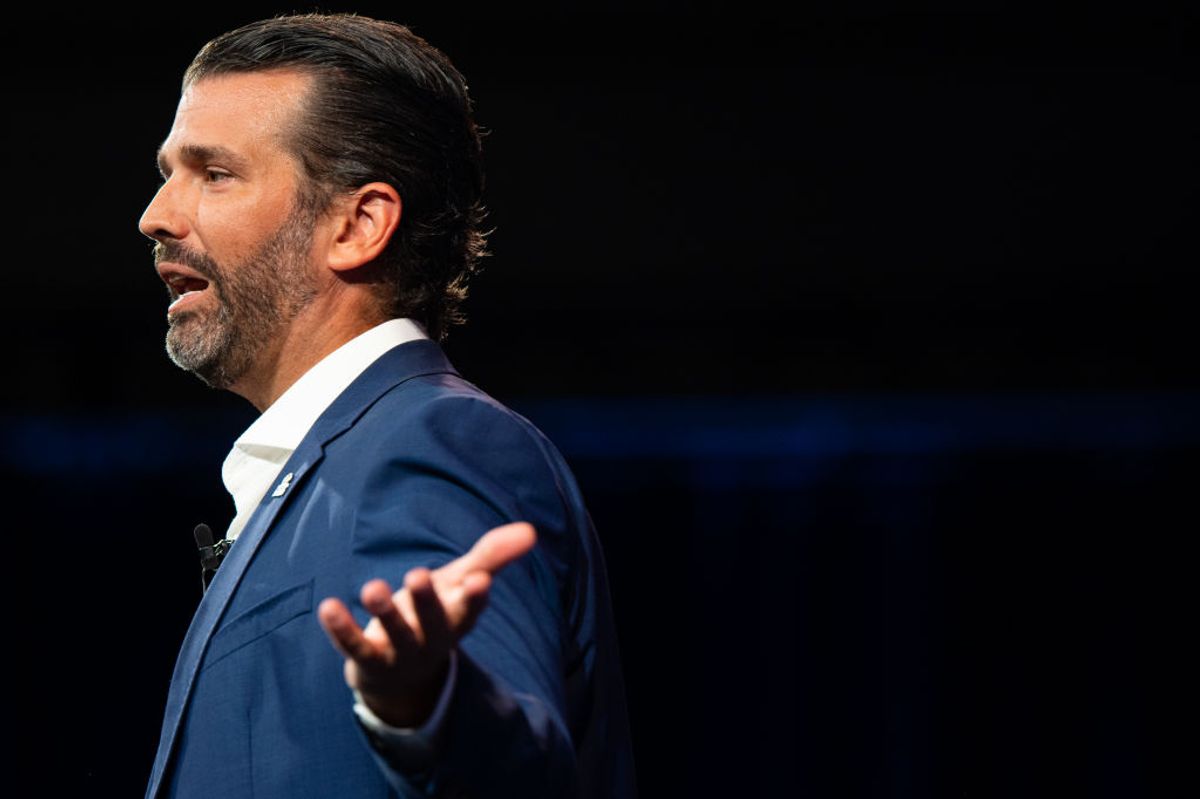 Claim:
In December 2021, Donald Trump Jr. said that for American conservatives, following biblical principles or the "teachings of Jesus" had "gotten us nothing."
Rating:

In a speech on Dec. 19, Donald Trump Jr. opined that for American conservatives, following the biblical principle of "turning the other cheek" had "gotten us nothing." That is to say, American conservatives should be more pragmatic and ruthless in pursuing their political aims. However...

Trump Jr. did not dismiss the value, importance, or usefulness of any and all biblical principles, or any and all "teachings of Jesus," as some critics inaccurately claimed.

In December 2021, a controversy emerged over remarks supposedly made by Donald Trump Jr. — son of, and adviser to, former President Donald Trump — at a conservative convention in Arizona.

On Dec. 21, for example, Relevant magazine published an article with the headline "Biblical Scholar Donald Trump Jr. Tells Young Conservatives That Following the Bible Has 'Gotten Us Nothing'":

On Sunday, Turning Point USA hosted Donald Trump Jr. where he praised a crowd of young conservatives as “the frontline of freedom” but cautioned that following biblical teaching like “turn the other cheek” was holding them back and has “gotten us nothing.”

On Dec. 26, Atlantic magazine published an opinion column by Peter Wehner, a former speechwriter for Republican former President George W. Bush. The headline and sub-headline read "The Gospel of Donald Trump Jr." and "The former president’s son told a crowd that the teachings of Jesus have 'gotten us nothing.'"

Linking to that column, U.S. Rep. Adam Kinzinger, an anti-Trump, Republican Congressman from Illinois, wrote on Twitter "'The teachings of Jesus has gotten us nothing.' Wow."

There was an element of truth to these characterizations of what Trump Jr. said, but he did not say that any and all "biblical teaching" or any and all "teachings of Jesus" had failed American conservatives — an important distinction. We are therefore issuing a rating of "Mixture."

What Donald Trump Jr. Said (and Did Not Say)

Trump Jr. made the remarks in question on Dec. 19, during his speech at the AmericaFest conference, hosted by the conservative youth organization Turning Point USA, in Phoenix, Arizona. The relevant comments can be watched further below, and the following is an excerpted transcript:

Burning down the federal courthouses all over the West coast, taking them over, trapping police inside — that's not an insurrection, folks. But if your grandmother was somewhere within 200 miles of Washington D.C. on January 6th, they're being investigated by the F.B.I. Right? I mean, talk about an agency who's lost its way.

And what's funny is this. We do have to make the distinction. I was at events last week. Six F.B.I. people came up to me, I'm like "Oh God, what did I do now? 'Russia Russia Russia Russia?' Something else?"...And it was exactly the opposite. They came up to me and apologized. Right? Because we have to make the distinction between leadership and the door kickers. The guys that carry the guns...they get it. They're more ashamed than we all are, of what's happened to the leadership. But it's the lawyer/bureaucrats at the top, the guys that have never touched a gun, that have managed to infiltrate all aspects of our government, of our institutions. They're the ones that are controlled by the Left. And that's because we have allowed it to happen.

That's why watching a group like this here means so much to me. It's why I got my butt on a plane and flew all the way to the West coast to speak for half an hour, only to fly back. [Crowd cheers and applauds]. Because we are the frontline of freedom. [Crowd cheers]. We are the frontline of liberty. And if we band together, we can take on these institutions. But we've got to do it together. Okay?

That's where we've gone wrong for a long time...If we get together, they cannot cancel us all. [Crowd cheers and applauds]. Okay? They won't. And this will be contrary to a lot of our beliefs, because I'd love not to have to participate in cancel culture. I'd love that it didn't exist. But as long as it does, folks, we better be playing the same game. Okay? We've been playing T-ball for half a century, while they're playing hardball and cheating. Right? We have turned the other cheek — and I understand, I understand, sort of, the biblical reference, I understand the mentality, but it's gotten us nothing. Okay? It's gotten us nothing. While we've ceded ground in every major institution in our country. Right? We've given up academia,...we gave up pop culture,...they've taken over the upper echelons of law enforcement,...they've taken over the upper echelons of our military...

It's clear from viewing Trump Jr.'s remarks in their full context that he was making the broader claim that American conservatives ought to be more pragmatic and ruthless in pursuing their political aims. To that end, he opined that the principle of "turning the other cheek" had proven to be of no benefit to that movement.

"Turn the other cheek," taken from the Sermon on the Mount, is an important maxim in Christian moral philosophy, but it is far from the only one. In rejecting its usefulness to American conservatives, Trump Jr. was not rejecting the value of any and all Christian and biblical principles.