Donald Trump did call for a boycott of Apple products, but the tweet didn't come from his iPhone. 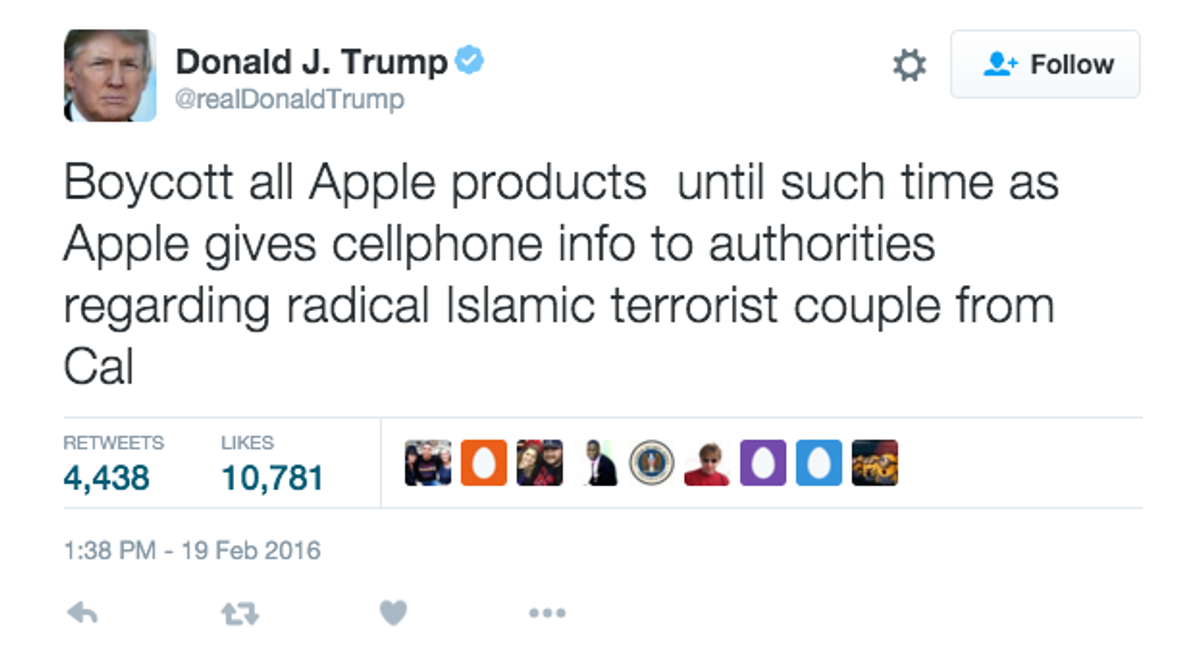 Claim:
Donald Trump called for a boycott of all Apple products in a tweet sent from his iPhone.
Rating:

Donald Trump's account set tweets from an iPhone after the boycott call was tweeted; just before the tweet in question, Trump stated he used both Apple and Android devices.

Trump appeared to send the boycott tweet from an iPhone; Trump hid his iPhone use.

On 19 February 2016, presidential candidate Donald Trump sent a tweet urging followers to boycott all Apple products due to a dispute between the United States government and the tech giant over backdoor access to iPhones:

Not long after Trump's tweet was published, screenshots began circulating that appeared to depict the tweet as marked sent "via iPhone."   Most users didn't see the tweet in that form, as Twitter removed most client markers in 2012, which meant that reproducing the claim was somewhat complicated. Most social media screen captures of the tweet in question also ignored one of Trump's tweets just before the "boycott" call:

I use both iPhone & Samsung. If Apple doesn't give info to authorities on the terrorists I'll only be using Samsung until they give info. — Donald J. Trump (@realDonaldTrump) February 19, 2016

In that tweet, Trump openly admitted to being a current iPhone user, indicating that he possessed both Android and Apple devices.  That made the "via iPhone" claim was less damning, unless users expected Trump to leap off the campaign trail and head to the first cell phone shop to switch out his devices.

Given the fact that most desktop and client Twitter users weren't privy to immediate information regarding a tweet's device of origin, many spread versions of the photograph without question.  On one popular tweet mocking Trump, users disagreed on the veracity of the image:

@panzer Looking directly at twitter's api... the tweet came from an android device. So did you photoshop this yourself? Who's the source?

@DufusMagoo @panzer no, it didn’t. It came from an iPhone as the API details. Other later tweets come from Android or Twitter web client. — Charles Arthur (@charlesarthur) February 20, 2016

Comments on the original tweet joked about "if" the tweet was sent by iPhone, suggesting that it originally wasn't marked that way to the relatively few users whose Twitter clients showed such information:

@Mulignane how gold would this be if it was tweeted from Twitter for iPhone — Jeremy (@TheLifeofJeremy) February 19, 2016

Other accounts inaccurately described Trump's "Samsung" tweet as a follow-up, completely changing the context of the actual second tweet.  When viewed in reverse order, Trump's first tweet appeared to be a mea culpa or admission of guilt in using an iPhone to send the tweet.

Using the Twitter analytics tool Twitonomy, we were able to get slightly more solid information about Trump's Twitter tools of choice. According to that service, the "boycott" tweet was sent via Android and the "Samsung" tweet came before it:

Using the same service, we were able to see that Trump (or a staffer) apparently sent at least one tweet using an iPhone on 22 February 2016:

However, that data also revealed that Trump primarily relied on Android to connect with his Twitter followers:

So while it is true that Trump (or a campaign staffer) continued to use an iPhone after his "boycott" tweet, that tweet appeared to have been sent by Android. There was no record of a deletion of the tweet with an iPhone marker, nor was a tweet about using Android and Apple sent after Trump's boycott call. Using a variety of clients and Twitter tools, we were unable to reproduce a version of the tweet in question with a "via Twitter for iPhone" marker.