"It bounced twice and then went clank, into the hole," the former president claimed in March 2022. 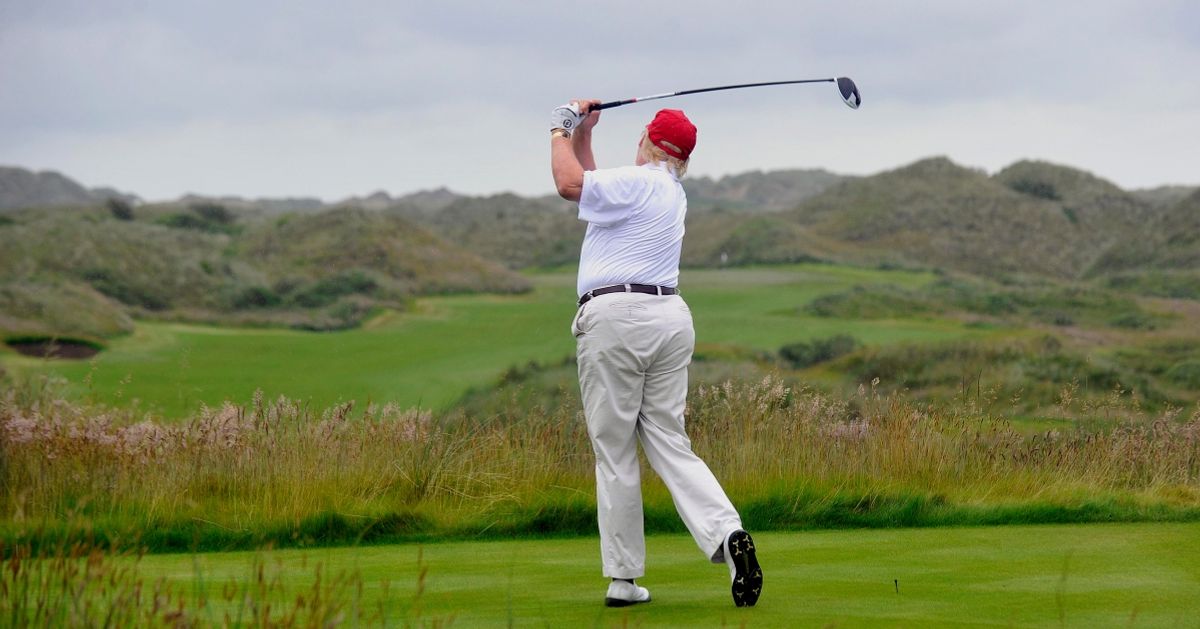 In March 2022, former U.S. President Donald Trump published a lengthy and detailed official statement in which he claimed to have hit a hole-in-one at his own golf course in West Palm Beach, Florida.

Concrete evidence (e.g., in the form of a video documenting the hole-in-one itself) is lacking, but the response of putative witnesses to the event suggests it is more likely than not that Trump did, in fact, pull off the impressive feat. However, without definitive proof, we are issuing a rating of "Unproven," for now. If definitive evidence becomes available, we will update this fact check accordingly.

Many people are asking, so I'll give it to you now, it is 100% true. While playing with the legendary golfer, Ernie Els,...Gene Sauers,...Ken Duke, and Mike Goodes,...I made a hole-in-one.

It took place at Trump International Golf Club in West Palm Beach, Florida, on the 7th hole, which was playing 181-yards into a slight wind. I hit a 5-iron, which sailed magnificently into a rather strong wind, with approximately 5 feet of cut, whereupon it bounced twice and then went clank, into the hole.

Trump's detailed official statement provoked mockery among some observers, especially his critics, and some quickly dismissed his claims as false. We have not seen any concrete evidence to suggest Trump was lying, and that allegation seems to be based on his known past record of distortion, exaggeration, and self-promotion. In any event, let's evaluate the evidence we do have.

First off, it is certainly plausible that Trump hit a hole-in-one. Hole 7 on his West Palm Beach course is a Par 3, meaning its is relatively short — as opposed to a Par 4 or Par 5 hole. A hole-in-one on a Par 4 is extremely rare, and on a Par 5 it is basically unheard of. However, according to figures published by Golf magazine, a hole-in-one on a Par 3 takes place about once every 3,500 rounds. Unlikely, but certainly plausible.

Depending on each player's handicap (a measure of the overall quality of their game) and tee box (how far forward they take their first shot on the hole), the 7th hole stretches between 117 and 191 yards from the tee to the hole. Trump claimed to have played the hole at 181 yards (the second-longest tee box setting available). The illustration below shows the layout of the hole on the golf course's website:

Secondly, video footage exists showing the apparent response of Trump's fellow players to the shot. Posted to Twitter by Trump spokesman Budowich, the short clip shows Trump walking up the green, pointing out a ball in the hole and picking it up. Then he receives high fives and congratulations from his fellow players:

We don't yet have the evidence needed to rule out the possibility that Trump cheated and misled his fellow players into believing his shot had gone straight into the hole, or even that his fellow players were privy to a hoax. However, to this writer at least, the responses of both Trump himself and the other players, as shown in the video, did appear authentic and genuine. Ultimately, each viewer will have their own subjective interpretation of the clip.

On Facebook, Tammy Sauers — wife of Gene Sauers, a senior professional golfer and one of Trump's fellow players on March 26 — posted a photograph of the group marking the purported hole-in-one on the 7th green, as well as pictures of a "Hole-in-One" cake and a commemorative, framed photograph prepared by staff at Trump's golf club: For his part, Els made reference to the putative hole-in-one on social media, describing it in terms that suggest he personally witnessed Trump's ball going in the hole: "Great shot on Saturday 45 [Trump]! Fun to watch the ball roll in for a hole-in-one."

Els is a World Golf Hall of Fame inductee and former major championship winner with a strong reputation in the world of golf. The fact that he made a point of publicly congratulating Trump on the purported shot is significant, but is ultimately, not definitive evidence.

Snopes contacted Trump's office, and each of the supposed witnesses listed by Trump (or their representatives), and requested any additional evidence or details that might corroborate Trump's claims. Only Budowich responded, directing us to Els's social media post.