A satirical image led many Twitter users to believe Donald Trump had referred to Canadians as "snow Mexicans." 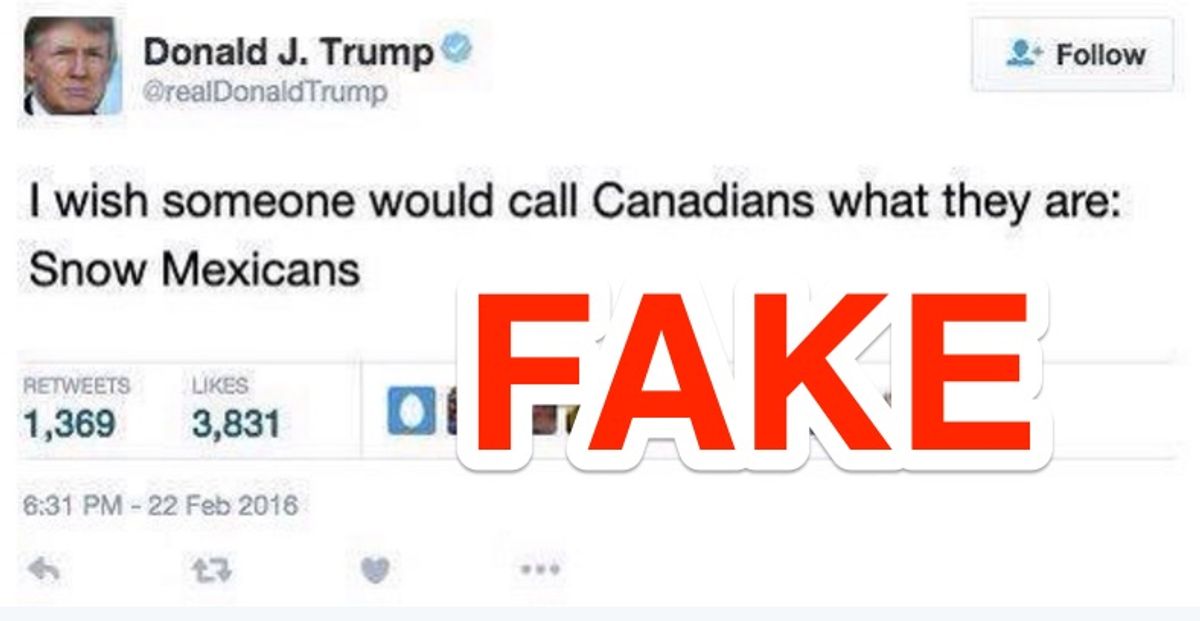 In late May 2016, Twitter users were circulating a rumor that Republican presidential candidate Donald Trump had derisively referred to Canadians as "Snow Mexicans":

@ViewFromWise Did you happen to sew his post about Canadians the other day? He called them "Snow Mexicans". No lie, total truth. Wow!!!

@GaryRayBetz @ViewFromWise Well he recently called Canadians "Snow Mexicans". I came across that on Twitter about 2 weeks ago. Wow. — Stephanie Barrett (@imfrog2) June 6, 2016

Documentation for this rumor eventually appeared in the form of a purported screenshot of a tweet from Donald Trump's official Twitter account bearing a 22 February 2016 date stamp: However, some elements of that screenshot didn't match Twitter's interface, suggesting it had been fabricated. Indeed, Donald Trump's Twitter account issued a tweet at the very same time shown on the screenshot (6:31 PM Eastern Standard Time on 22 February 2016), but it had nothing to do with Canadians and made no mention of "snow Mexicans":

It is fairly obvious the "snow Mexicans" comment was not an authentic Trump tweet, but rather an altered version of a tweet that referenced sending "illegals" out of the U.S. And given the news media's intense coverage of Trump's sometimes incendiary remarks (on Twitter and elsewhere), it's exceedingly unlikely the GOP candidate could have issued such a comment without its having generated widespread media interest.