Did This Video Show a Dog Rescued from Train Tracks?

Here's what we found when we looked at the video frame-by-frame. 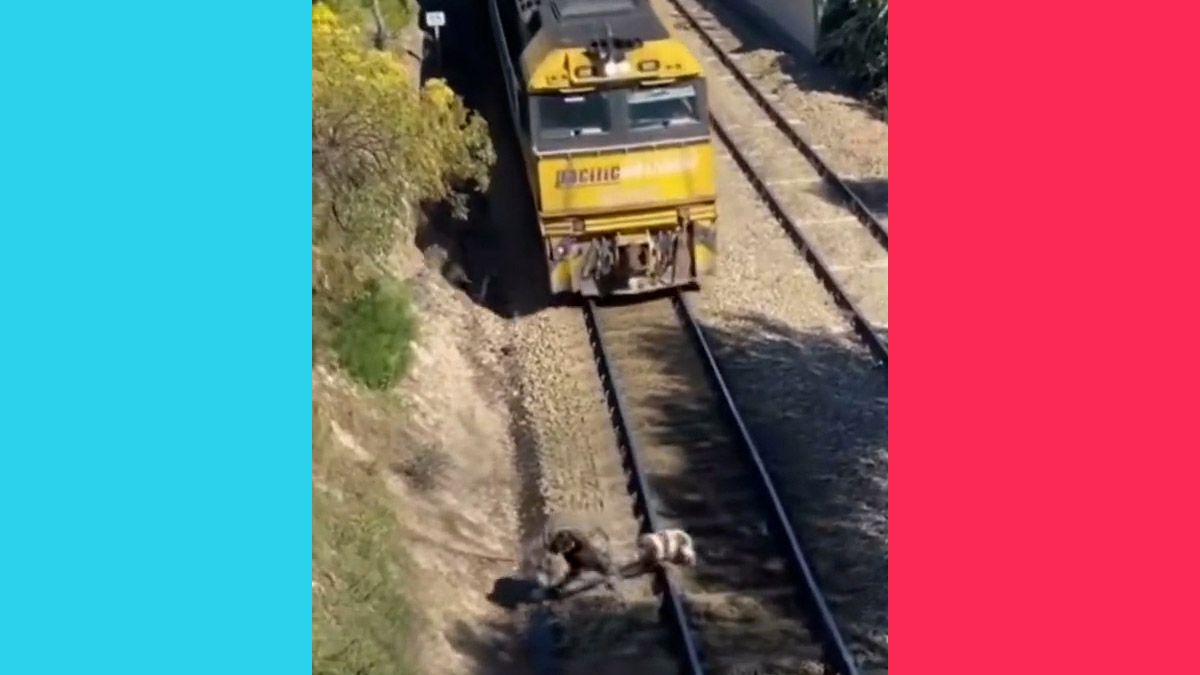 A TikTok video was posted that showed a man rescuing a dog tied to railroad tracks the instant before a train would have hit both of them.

Claim:
A TikTok video shows a man rescuing a dog tied to train tracks right before it could hit both of them.
Rating:

In September 2021, a TikTok video was posted that showed a man rescuing a dog tied to railroad tracks the instant before a train would have hit both of them.

The good news is that the dog is ok. The even better news is that neither the man nor the dog were ever in any danger, as the video was faked. It all involved some pretty slick digital editing. Here's how we know.

On the @random_crap.69 account, the brief clip was viewed tens of millions of times in a matter of hours. The vast majority of the tens of thousands of comments appeared to believe that the man in the TikTok video really did rescue the dog from being killed by the train. The clip later disappeared, but here's the same video on YouTube:

The top comment read: "What kind of a person leaves a dog tied to a train track!" Other commenters expressed disbelief at the fact that some men were shouting to "leave it." The man who appeared to rescue the dog was referred to as a "legend."

However, a select few commenters mentioned that it looked like it was "staged" and "fake." Others mentioned "CGI." They were correct.

How We Know It's Fake

Off the top, there are a few initial issues that led us to finding out that the TikTok video was digitally edited and that the man and the dog were not in danger of being hit by a train. One way to do this would have been to record the man running to and untying the dog when there was no train coming and then recording a completely separate moment with only the train coming down the tracks. The clips could then be combined and manipulated in the editing process to look like they happened at the same time.

First, we found no local news stories that covered the incident. We also found no details on who the men were, where the video was recorded, or what happened to the dog afterward. It could also be argued that the men who were shouting were explaining things to viewers in a way that might not happen if this was a genuine scenario. These data points aren't sufficient evidence alone to show that the video was faked. However, we found more clues that showed the moment was staged.

The most glaring issue in the video came in the digital editing process. After the man pulls the dog off the train tracks, he falls on the ground to rest with the dog as the locomotive passes by. At this moment, the train casts a shadow on the man and the dog. However, there's still a shadow visible under the man's head, even though he's in shade. A shadow is visible under the man's head even though he is supposedly shaded by the train.

We also noticed a blur is visible on the tracks as the train enters the shadow of an offscreen tree. Another blur was also noticed in the TikTok video when the front of the train reaches the same space in the frame as the man and the dog. This blur can be seen below:

The video appeared to blur at this moment because the video editor had to merge all of the elements without there being a noticeable line as the two separately recorded clips were combined. A blur is one way to accomplish this, especially if it's done quickly with so much motion in the video from the passing train.

We found the TikTok video of the dog being rescued from the train tracks on the @random_crap.69 TikTok channel. The original channel where the clip was posted appeared to be on a musician's account known as @richysand. However, the video was removed by TikTok. A spokesperson for the company confirmed to us that it was deleted for violating TikTok's "Community Guidelines on dangerous acts." We also contacted @richysand to ask about the video creation. We will update this story if we receive more details.

While we were researching the video, we stumbled upon a Yahoo News Australia piece from author Michael Dahlstrom. In the story, Dahlstrom wrote that "global experts have raised doubts about the authenticity of the footage" and that the dog "appears to be a Cavalier King Charles Spaniel." The article also said men speaking in the clip had "Australian voices."

Interviewed for the story was Berkeley University Associate Dean Professor Hany Farid, who "specializes in digital imagery analysis, and is one of the six founding members of TikTok’s Content Advisory Council." Farid told Dahlstrom: "I am fairly certain this video is fake."

Also mentioned in the Yahoo News piece is the fact that faked videos such as these sometimes can take the "spotlight" away from genuine efforts to help animals who desperately need it.

We subsequently found a Reddit post with commenters who broke down why the video was fake. The post was partially removed by moderators so that it couldn't rank highly in the r/holdmybeer subreddit. However, it was still available to be viewed and commented on.

In sum, a TikTok video showing a man rescuing a dog from train tracks was faked in the digital editing process. Its origins are unclear. For further reading, we previously reported on another faked video involving a man and a train.

“HMB While I Save a Dog.” Reddit and r/holdmybeer, 27 Sept. 2021, www.reddit.com/r/holdmybeer/comments/pwloef/hmb_while_i_save_a_dog/.

On March 24, 2022, a new video link was added after the original TikTok video disappeared.