Photo Shows Dog Peeing on Sign for Biden, Not Trump

Here's how we figured out that this popular picture had been doctored. 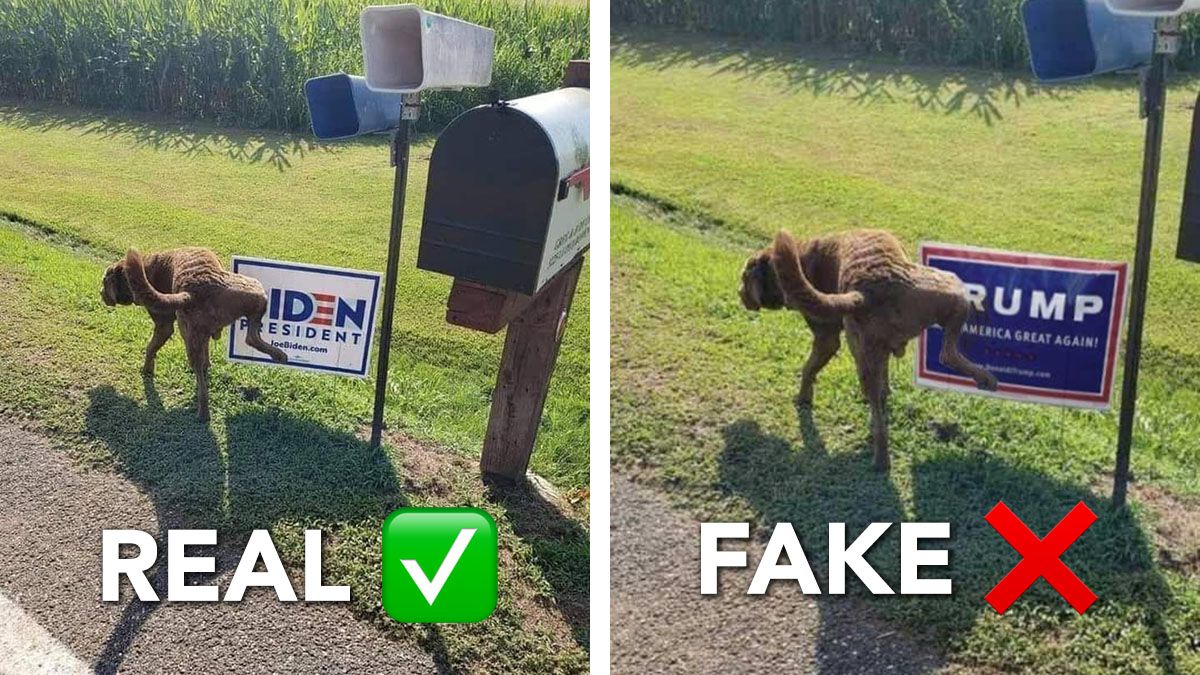 Since at least September 2020, social media users have shared a picture that appeared to show a dog peeing on a "Make America Great Again" campaign sign for former U.S. President Donald Trump. However, this was a doctored photograph. The original picture showed the dog urinating on a sign in support of U.S. President Joe Biden. The real photograph was still popular in Facebook groups in October 2022.

One of the most popular postings of the altered picture that misleadingly showed the Trump sign was found on the r/pics subreddit on Reddit. The post was submitted on Sept. 22, 2020. It received more than 50,000 points, which meant that it was wildly popular on that day. We only found two commenters who tried to tell the other users that it had been doctored.

The oldest posting of the original picture with the Biden sign that we could find came from Facebook user Joe Murphy on Aug. 23, 2020. Murphy wrote, "I don't know who's dog this is. But he needs a treat. Good boy." It was also shared two days later on Twitter by the Conservative Pets account.

How did we figure out which one was the original? We were able to find the photograph of the Trump sign that was digitally cut out and pasted over the Biden sign.

A search of Google for "Trump yard sign" (without quotes) showed numerous results. Many of the results included pictures of signs that mentioned both Trump and Pence. Since the altered picture did not show Pence's name, we performed a second Google search for "Trump yard sign -Pence" (without quotes). Placing a minus symbol before Pence's name excluded him from search results. Then, we saw it.

An article from U.S. News & World Report showed the same picture of the Trump sign, which included the "Make America Great Again" slogan. The photograph was shot by Scott Olson for Getty Images. It was captured in Schneider, Indiana, on May 3, 2016.

In Olson's photograph of the sign, the reflections and creases matched the ones seen in the doctored picture of the dog peeing on the Trump sign, in particular above the "U," "M," and "P," as well as the upper-right corner.

Is it likely that there are plenty of other photographs that have been posted online that captured dogs urinating on various campaign signs for local, state, and national politicians? Sure. However, again, this specific picture was doctored and originally showed a dog peeing on a sign for Biden, not Trump.