Did Negro the Colombian Dog Pay for Cookies with Leaves?

This is the true story of a very good boy. 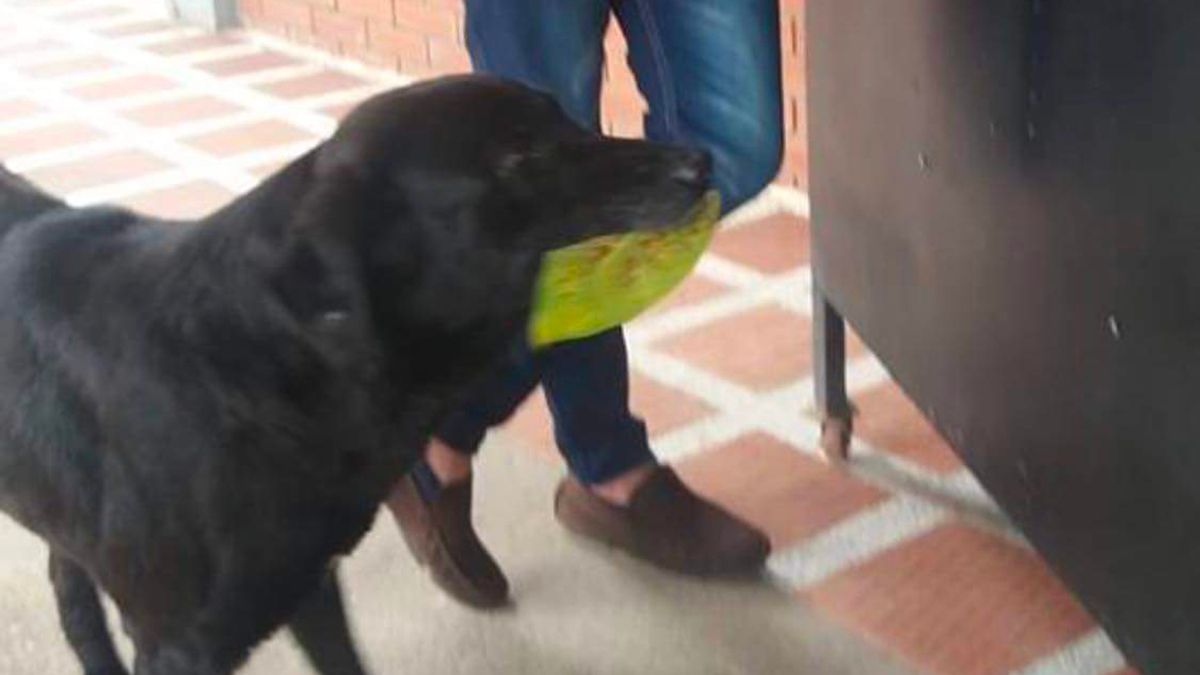 Pictures, videos, and a meme showed that a dog named Negro once knew how to present a leaf for a cookie at a school in Monterrey, Colombia. (Image Via @AyPlobnrg/Twitter)

Claim:
A meme shows a dog in Colombia named Negro presenting a clerk with a leaf in exchange for a cookie.
Rating:

On July 17, 2022, the Facebook page The Sized posted a meme that claimed a dog in Colombia named Negro was known for paying for cookies with leaves. We received mail from our readers that asked if this was true. We soon found that the story of the dog was real.

The meme said, "After watching customers pay money to buy cookies from a store, a dog in Colombia named Negro started bringing a leaf in his mouth and presenting it to the store attendant. The leaf-cookie exchange has become a daily occurrence for extremely good boy Negro, who is a 'paying' customer just like everybody else."

This true story appeared to have first been posted on Twitter on April 16, 2018. The tweet was liked and shared for a total of hundreds of thousands of engagements.

The tweet translates to, "He is 'NEGRO' and he likes cookies. He arrives at the school store and as if he were just another student, he asks for a cookie. It is not trusted or given away. Black sees that the students carry bills and receive something in return. He picks up a leaf from the ground and goes to buy his snack."

According to The Dodo, the store referenced in the meme was a small shop on the campus of Institución Educativa Técnico Diversificado de Monterrey, which is located in Monterrey, Colombia.

Apparently, this tale of man's best friend was once subjected to a bit of misinformation. The La FM Facebook page previously falsely claimed that the story took place in Mexico. Commenters called out La FM for the mistake.

This picture of the school was posted on its Facebook page.

The article from The Dodo said that, as of 2018, Negro the dog was serving as a "guardian of sorts," watching over the children's daily activities. He had been cared for by the school's faculty since around 2013.

According to the story, one day Negro decided to try something that he witnessed the students doing at the shop:

Early on in Negro's tenure at the school, he came to be aware of the little store on campus where students gather to buy things on their breaks; sometimes they'd buy him cookies sold there.

This, evidently, is where the dog first learned about commerce — and decided to try it out himself.

"He would go to the store and watch the children give money and receive something in exchange," teacher Angela Garcia Bernal told The Dodo. "Then one day, spontaneous, he appeared with a leaf in his mouth, wagging his tail and letting it be known that he wanted a cookie."

We found two pictures of Negro after scrolling far down in the massive number of photos uploaded on the school's Facebook page:

Negro puts his paws up on the counter at the school's small shop.
Negro presents a leaf to the shopkeeper in order to receive a cookie.

The Dodo added that, "Staff have made sure he's only getting treats safe for dogs to eat, and they do limit his purchases to just a couple a day (to stave off inflation in both the leafy currency and his waistline)."

We didn't find any other pictures of Negro on the school's Facebook page. His most recent photographs were posted in 2018.

Note: We reached out to Angela Garcia Bernal, who was previously interviewed by The Dodo. However, we were unlikely to receive a response any time soon, as our message went to her message requests. Messenger does not issue notifications for message requests from unknown senders.

Messenger, Stephen. “Dog Always Brings A Leaf To ‘Buy’ Himself Treats At The Store.” The Dodo, 25 Apr. 2018, https://www.thedodo.com/close-to-home/dog-buys-treats-using-leaf.