Was This Dog Found 'Mummified' Inside the Trunk of a Tree? 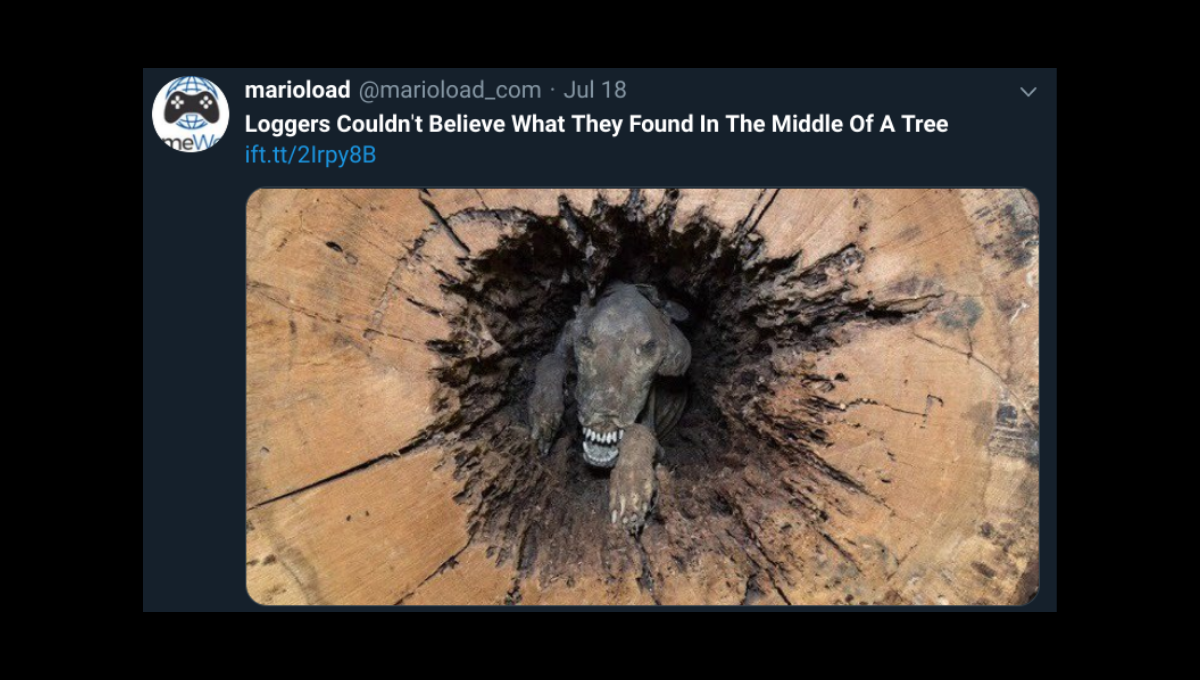 Claim:
A photograph shows a dog that was "mummified" inside the trunk of a tree.
Rating:

An eerie photograph supposedly showing a mummified dog stuck inside the trunk of a hollow tree is frequently shared online with clickbait titles such as "Loggers Couldn’t Believe What They Found Inside This Hollow Tree": While some viewers may have a difficult time wrapping their heads around what this image captures, it is a genuine photograph of a dog who died after becoming stuck in the center of a hollow tree. The picture documents the remains of a canine posthumously named "Stuckie," which are currently on display at Southern Forest World, a museum in Georgia.

It is believed that Stuckie met his unfortunate fate sometime in the 1960s. The hunting dog (we're not entirely sure of its breed, but early reports identified it as a hound) was reportedly chasing an animal when it became trapped inside the hollow part of a tree. The dog perished there and remained entombed inside the tree for about 20 years, until it was cut down by loggers from the Georgia Kraft Corp. While we haven't been able to find any firsthand accounts of the discovery, it's reasonable to presume that the loggers indeed "couldn’t believe what they found inside this hollow tree," as they decided it was worthy of preservation at the Southern Forest World museum.

A 1985 article published in the Atlantic Constitution newspaper recounted the story of Stuckie and included comments from W.J. Martin, then the executive director at Southern Forest World, who explained that "a chimney effect occurred in the hollow tree, which resulted in an upward draft of air ... This caused the scent of the dead animal to be carried away so that insects and other organisms were not attracted to it": 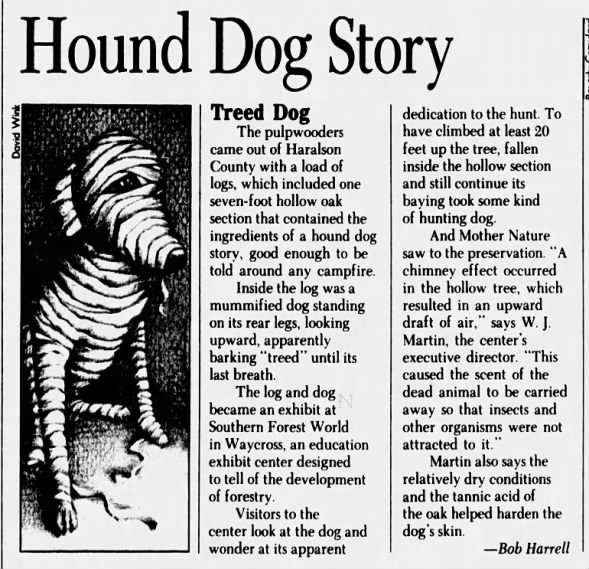 While Stuckie has been displayed at this Georgia museum since the 1980s, photographs of the preserved remains of the animal didn't reach viral levels on the internet until 2018. At that time, Newsweek spoke to Kristina Killgrove, a biological anthropologist at the University of West Florida who studies decay in humans, about how this dog became mummified in the center of a tree:

Normally when a person or an animal dies, the microbes in the body are left unchecked by biological processes that keep them under control in living creatures. Without the usual guardians in place, they begin to eat the body, and then the microorganisms in the gut start the process of putrefaction. "They grow, they reproduce, and they start taking over the body," Killgrove told Newsweek. "That's the disgusting part." The body bloats and decays, and bacteria, fungi, insects and other animals come to eat the remains.

But this isn't what happened with Stuckie in that chestnut oak that would become his coffin. Chestnut oaks contain tannin, which is used to tan animal pelts and prevent decay. Tannin is a natural "desiccant," or material that absorbs moisture and dries out its surroundings.

Readers can get a closer look at Stuckie in the following video from the George Public Broadcasting show "Georgia Traveler":

We reached out to the Southern Forest World and will update this article if more information becomes available.