Does The Rock Own a T. Rex Skull?

Just how much does The Rock like old rocks? 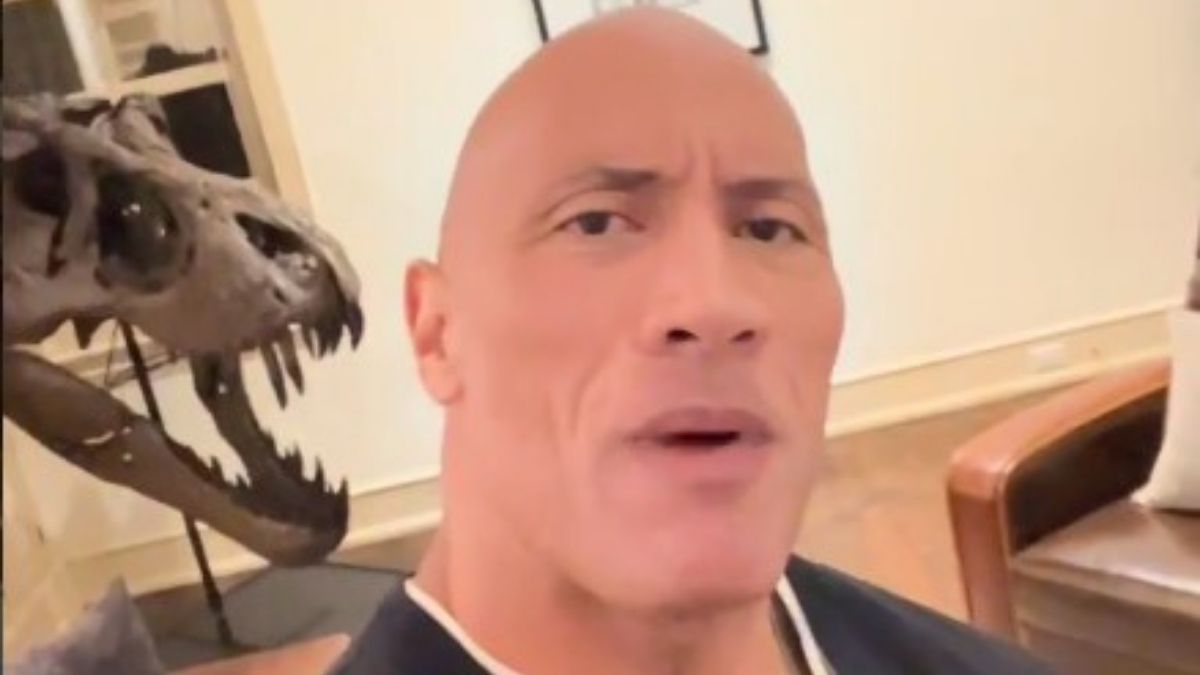 Dwayne "The Rock" Johnson owns a replica T. rex skull. The Rock did not purchase a nearly complete Tyrannosaurus rex fossil for more than $30 million only to remove its head for display in his house.

In January 2022, Dwayne "The Rock" Johnson appeared on "The Manning Cast," a sports broadcast helmed by former football players and brothers Peyton and Eli Manning. While the interview touched on several topics, some audience members (and eventually the Manning brothers) were distracted by what appeared to be a giant Tyrannosaurus rex skull sitting behind Johnson:

When The Rock was asked if he had a dinosaur skull, he responded, "I do, I've got a T. rex skull."

He added: "That's Stan. So Stan is the most complete T. rex skull ever found by a paleontologist and his name was Stan. So this T. rex was named after him."

Johnson is referring to a T. rex fossil that was excavated in 1992 after it was discovered by an amateur paleontologist, Stan Sacrison. This fossil, truly dubbed "Stan," is nearly 39 feet long.

Stan was housed at the Black Hills Institute of Geological Research in Hill City (BHIGR), South Dakota, for years, but in October 2020, the fossil was purchased for $31.8 million by an anonymous buyer. Here's a video showing the complete fossil:

More than three decades ago in South Dakota, an amateur paleontologist named Stan Sacrison discovered a titan of the ancient Earth: the fossil of a mostly complete, 39-foot-long Tyrannosaurus rex. Nicknamed “Stan” after its discoverer, the beast was excavated in 1992 and has long been housed at the private Black Hills Institute of Geological Research in Hill City, South Dakota. But even if you’ve never been there, chances are good that you’ve seen this particular T. rex. Dozens of high-quality casts of its bones are on display in museums around the world, from Tokyo to Albuquerque, New Mexico.

Now, an auctioneer’s hammer has thrown Stan’s future into question, with the dinosaur bones sold off to the highest—and, so far, anonymous—bidder, stoking fear among experts that this beloved T. rex may be lost to science.

On October 6, the London-based auction house Christie’s sold the T. rex for a record $31.8 million, the highest price ever paid at auction for a fossil.

Is The Rock this anonymous buyer? Did the movie star remove Stan's head to display in his house? No. The Rock did not purchase a nearly complete T. rex fossil only to dismantle its head and display it in his home. The movie star owns a replica sold by the Black Hills Institute of Geological Research.

On Jan. 18, Johnson posted a message to Instagram confirming that he was not the "mystery buyer" and that his skull was a replica:

A replica of Stan's skull is available on the BHIGR website for $11,500.

When STAN was collected in northwestern South Dakota in 1992, we knew that Stan Sacrison had made a significant discovery. Once the bones were prepared it became clear that STAN has the best skull of any Tyrannosaurus rex ever collected! Not only was STAN’s skull virtually complete, but also the 50 plus bones were preserved in pristine condition ...

STAN’s skull preserves a number of pathologies, or healed injuries. The cheeks (jugals) and lower jaws reveal the presence of irregular openings. One probable explanation for these holes is that they were puncture wounds received in battles with other T. rex. Smoothed edges around the holes indicate that the wounds healed. At the back of the skull on the supraoccipital crest of the braincase a portion of the bone is missing where the powerful neck muscles once attached. Directly below this compelling injury we find a round hole that is a perfect match for a front lower jaw T. rex tooth. These pathologies indicate the seriousness of the injuries STAN received, endured and recovered from, to live and fight another day.

Each bone was meticulously prepared and molded, preserving fine details of the bone texture. This attention to detail, along with STAN's provocative and compelling pathologies, makes this a truly engaging display for the casual observer as well as the dinosaur enthusiast.

The Rock did not buy the original "Stan" T. rex fossil for $31 million only to remove its head to display in his home. The actor actually owns a replica of this famous skull.

Updated [19 January 22]: Article updated from Unproven to Mostly False after Dwayne Johnson confirmed that his T. rex skull is a replica.