Does Suave Shampoo Contain an Ingredient That Causes Hair Loss? 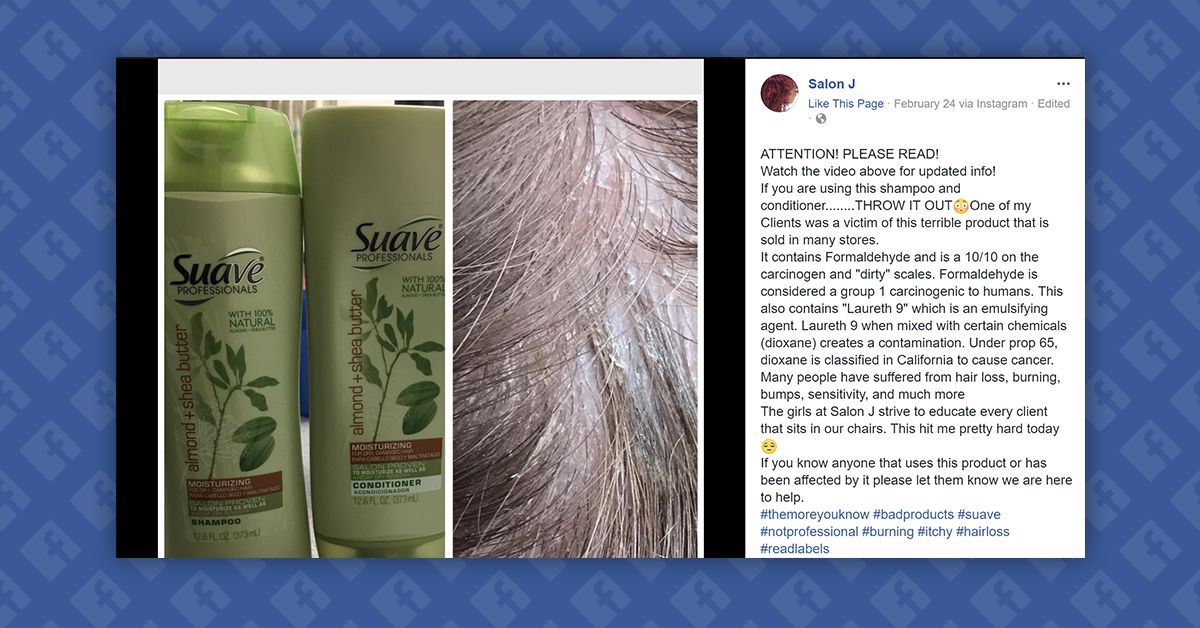 A Suave brand hair treatment product that was discontinued in 2012 contained thioglycolic acid.

The first one claimed that a Suave shampoo formulation contains thioglycolic acid, which is "extremely corrosive" and caused her hair to fall out in clumps:

The poster of that message allowed that the radiation pills she was taking to treat an unspecified blood disorder might have been and causing her hair loss, but nonetheless maintained that she had "burning my hair off for months" by using a shampoo containing thioglycolic acid.

However, the ingredient lists from the shampoo and conditioner labels for the Suave Professionals products shown in the Facebook post (almond and shea butter) do not include that ingredient:

In response to comments about this issue posted on their Facebook page by concerned customers, representatives from Suave confirmed that thioglycolic acid (typically used as a depilatory and in hair perming kits) was not present in those products:

A second article — now no longer available — was posted to the Facebook page of a hair salon, urging users to avoid the same brand of hair care products because they supposedly contain formaldehyde, "Laureth 9," and possibly dioxane, ingredients which in combination, according to this post, "create a contamination"). As with the first claim, none of the listed substances appeared in either product's ingredients list.  The second post appeared to have conflated Suave brand shampoos and conditioners that are currently available for retail purchase with a separate "hair smoothing" kit that was discontinued in 2012.

In 2013, plaintiffs in a class action lawsuit alleged that Suave Professionals Keratin Infusion 30-Day Smoothing Kit, a hair treatment product for women who wanted "smooth, shiny manageable hair with no frizz" (but was not a shampoo or cleansing product) "contains an ingredient or combination of ingredients that causes significant hair loss upon proper application" and that Unilever, Suave's parent corporation, knew this  but failed to disclose that fact. Those allegations primarily hinged on damage putatively caused by the extended use of thioglycolic acid on hair as a relaxant and expressed ancillary concerns involving the use of a supposedly carcinogenic common preservative:

The product claimed to be based in keratin, a protein naturally found in hair and would not contain dangerous chemicals, but pictures attached to the complaint showed some women suffering visible bald spots, broken and discolored hair, and burned scalp ... The plaintiffs claimed the product deceivingly used an ingredient that would release formaldehyde — a cancer-causing substance that could also lead to symptoms including irritation, skin sensitivity and breathing difficulties, according to the U.S. Department of Labor's Occupational Safety and Health Administration.

The 2013 suit was settled in 2014, by which time the treatment product in question had long since been removed from the market. The ingredient mentioned in the lawsiot (DMDM Hydantoin) is an extremely common antibacterial agent and preservative that works to release formaldehyde in small quantities, but is not itself "formaldehyde" and is not linked with hair breakage or loss.

Regarding the use of formaldehyde-releasing preservatives in consumer products, manufacturer Procter & Gamble explains that they are present in quantities far too small to pose safety concerns:

Formaldehyde occurs widely in fruits, vegetables, meats, and your own body, as it is formed naturally in small amounts by your breakdown of food into energy. Similarly, formaldehyde releasing preservatives, such as DMDM hydantoin, release very tiny amounts of formaldehyde, just enough to keep products from spoiling, but well below safe amounts. The formaldehyde releasing preservative we use is mainly DMDM hydantoin, but we also use Imidazolidinyl urea, Diazolidinyl urea, and Quaternium-15 in a very few products where they would be disclosed on the label.

Suave brand shampoos and conditioners do not contain thioglycolic acid (nor formaldehyde), and "formaldehyde releasing" preservatives are in no way exclusive to Suave products nor known to harm the health of consumers or their hair. Its presence in personal care topical products is extremely common and a method of inhibiting the growth of bacteria. In other words, if that ingredient was causing hair loss, it would not be exclusive to products from Suave.