Does Chuck Schumer Have an Unrestricted Concealed Carry Permit?

The claim that the Senate Minority Leader has a concealed weapons permit is based on one single unsourced article. 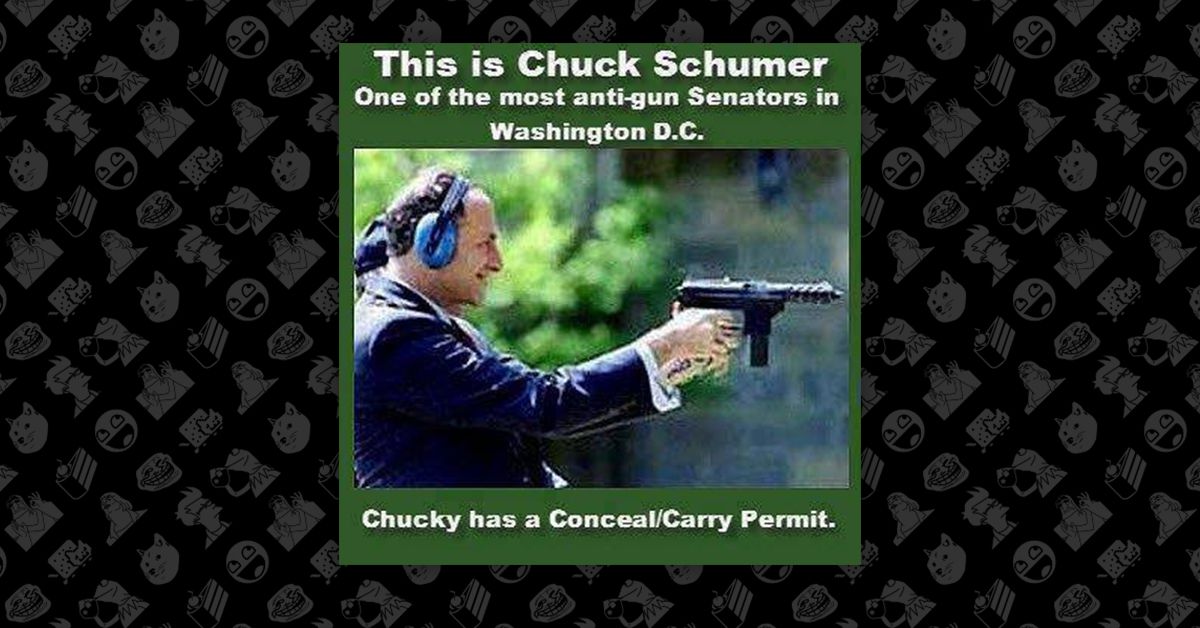 A decades-old photograph showing Sen. Chuck Schumer (D-New York) firing a gun popped up online in February 2018, as the debate on gun control ramped up in the aftermath of a mass shooting at a high school in Parkland, Florida that left seventeen people dead. This image was frequently included in memes which also carried the claim that the Senate Minority Leader had a concealed weapons permit: The image is real, but it does not show Schumer using his own firearm, nor does it have anything to do with an alleged concealed carry permit. It dates back to 1994, when Schumer and other lawmakers argued for a ban on assault weapons at a media event in Washington, D.C. The senator fired the weapon, a Tec-9 pistol, in an attempt to demonstrate the dangers of the weapon. Both the New York Times and the Chicago Tribune published editorials at the time that criticized the demonstration, arguing that it only muddied the waters on the issue:

Politicians don't feel obliged to smoke crack on camera to demonstrate the dangers of drug abuse or get behind the wheel of a car after several drinks to inveigh against drunk driving. But Treasury Secretary Lloyd Bentsen and House Judiciary Committee Chairman Charles Schumer (D-N.Y.) somehow couldn't find a way to rouse public concern about "assault weapons" without firing off a few rounds at a Washington police target range.

I imagine the effect was not what they had intended. A lot of Americans who saw Bentsen with his AR-15 rifle and Schumer with his Tec-9 pistol probably exclaimed, "Say, that looks like fun!" Others may have concluded that the demonstration simply dramatized the folly of allowing dangerous weapons in the hands of anyone connected to the federal government.

The claim that Schumer was or is licensed to carry a concealed weapon has appeared online for several years. We have seen this claim posted on numerous web sites, blogs, internet forums, and social media sites, but we have yet to encounter any evidence to back it up.

It seems to have originated in a September 2005 article published on a blog called RenewAmerica.com. The author, Jim Kouri, is a conservative media personality who claims to be a former chief of police on his MuckRack profile. However — as far as we can tell — Kouri never worked as a police chief, but rather as a director of public safety and police services for the New York State Division of Housing and Community Renewal.

Kouri claimed that "a check of Pistol License records" revealed that Schumer had an "unrestricted" pistol permit, but provided no information about how these records were obtained or any evidence that Schumer was indeed listed in this database. He also claimed that this rumor was originally pushed by conservative radio host Mark Levin, but again, provided no documentation to show when and where Levin allegedly made this comment:

At the same time, there are outspoken opponents of gun ownership, such as Senators Chuck Schumer (D-NY) and Diane Feinstein (D-CA), who are carrying concealed weapons, according to WABC Radio's Mark Levin. Levin, a recognized constitutional expert, heads the Landmark Legal Foundation. The LLF's goal is to protect American's from unreasonable and illegal government intrusions and violations of the US Constitution, including the Second Amendment.

At the same time, there are outspoken opponents of gun ownership, such as Senators Chuck Schumer (D-NY) and Diane Feinstein (D-CA), who are carrying concealed weapons, according to WABC Radio's Mark Levin. Levin, a recognized constitutional expert, heads the Landmark Legal Foundation. The LLF's goal is to protect American's from unreasonable and illegal government intrusions and violations of the US Constitution, including the Second Amendment.

If Levin did truly make such a statement (he did chastise Sen. Diane Feinstein in 2005 for having a concealed carry permit, something she did have, but got rid of in 2012), it is not a claim that he has often repeated. We found no record of Levin accusing Schumer of having a concealed carry permit prior to the publication of Kouri's article, nor at any other time since.

Kouri, on the other hand, has repeated this claim in at least two subsequent articles: One published in 2012 and another in 2016. Interestingly, the 2016 piece parroted a list of more than two dozen Democrats who owned guns from short-lived right-leaning news site HeatStreet.com, which was based on data from USA Today and did not include Schumer's name.

The unfounded rumor gained wider attention in 2010 when Republican senate candidate Jay Townsend repeated it during a debate with Schumer. The New York Senator responded by saying that he did not own a gun, nor did he have a license for one:

“I am also curious about one thing: I did read and I am understanding, for the record, that Senator Schumer is licensed to carry a concealed hand gun,” Townsend said.

“That is another example of misstatement by my opponent,” Schumer immediately replied. “It is absolutely not true.”

There was a momentary pause, broken by NY1’s Bobby Cuza, one of the debate panelists.

“….you’re not carrying a gun,” he asked Schumer, to laughs.

Schumer's press office confirmed that the senator did not have a concealed weapons permit at the time by sharing a letter from Susan Petito, the Assistant Commissioner of Intergovernmental Affairs: "This letter will confirm that a review of the records of the License Division of the New York City Police Department reveals that there are no pending handgun license applications filed by, and no hangun licenses issued to, Senator Charles Schumer or Ms. Iris Weinshall."

Townsend directed the media to an article published on American Daily in 2005 to support his claim that Schumer was licensed. That American Daily article, however, was just a reprint of Kouri's original opinion piece which offered no evidence to support its claim.

A spokesperson told us that Schumer has not applied for or received a gun license since this letter was sent in 2009. We reached out to the NYPD to confirm this information, but did not hear back by press time.