Presidential hopeful Joe Biden's position on climate change became a hot topic on the first night of the presidential debates in the fall of 2020. 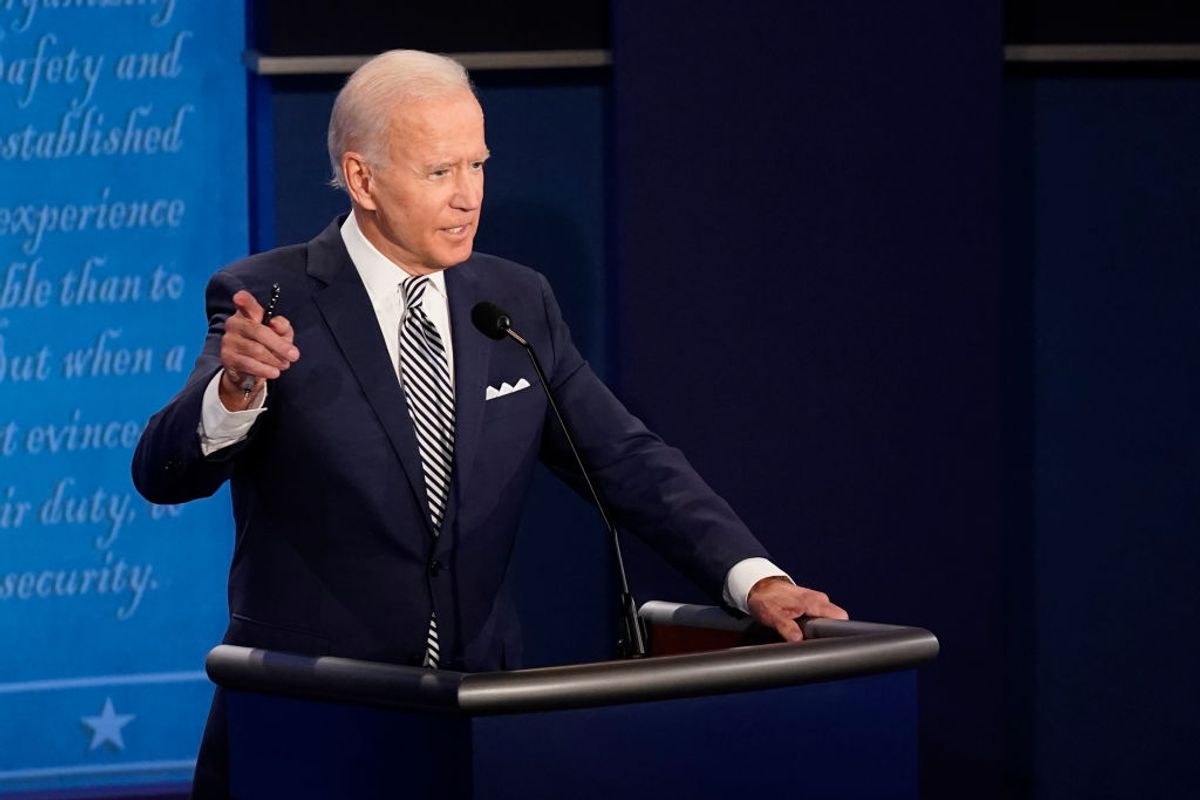 Claim:
U.S. 2020 Democratic presidential candidate Joe Biden does not support the set of climate change proposals set forth by other members of his party known as the "Green New Deal."
Rating:

Biden said during the first 2020 presidential debate that he does not support the Green New Deal, a congressional resolution that lays out a set of proposals for tackling climate change. Instead, he said he supports the "Biden Plan," which itself refers to the Green New Deal as a “crucial framework for meeting the climate challenges."

Despite sharing certain elements in common with the Green New Deal, the Biden Plan also differs from it in significant ways, so it would be inaccurate to claim Biden supports the Green New Deal in its entirety.

During the first 2020 U.S. presidential debate held in Cleveland on Sept. 29, Democratic nominee Joe Biden said he does not support the Green New Deal, a resolution introduced in Congress by members of his own party proposing strategies for dealing with climate change, but instead backs the “Biden Plan” for doing so, which is laid out on his campaign website.

Biden's disavowal came on the heels of an attempt by his opponent, U.S. President Donald Trump, to tie him to the Green New Deal, claiming it would cost $100 trillion if implemented. Biden's responses (which begin one hour and 20 minutes into the below video clip) were as follows:

“The Green New Deal will pay for itself as we move forward. We’re not going to build plants that in fact are great polluting plants.”

These statements sparked criticism from Republicans like Omar Navarro, who ran three unsuccessful bids for California’s 43d Congressional District in 2016, 2018, and again in 2020. On Sept. 30, Navarro shared a screenshot from Biden’s website that described the Green New Deal as a “crucial framework for meeting the climate challenges…” The language in the tweeted screenshot above was indeed found on Biden’s website as of Sept. 30, but was taken out of context and doesn't reflect the differences between the Biden Plan and the Green New Deal, which we will discuss below.

The Green New Deal resolution was introduced in the U.S. House of Representatives on Feb. 7, 2019, in response to Trump’s 2017 announcement that the United States would withdraw from the Paris Agreement on climate change. The 14-page proposal sets forth a number of policies aimed at lowering greenhouse gas emissions produced by American companies, creating high-wage jobs for Americans, and to set an overall framework for environmental justice and resiliency against climate change-related disasters. It is important to note that the Green New Deal is nonbinding, and if it were to pass, nothing outlined within its pages would become law.

Biden made climate change a cornerstone of his 2020 bid for the presidency, in turn criticizing Trump's handling of environmental affairs. It is true that the Biden Plan (archived here for reference) includes elements of the Green New Deal and is similar to it in that both plans agree that the U.S. needs to act urgently and epically to meet the scope of the climate change challenge, and that the environment and the economy are “completely and totally connected.” The Biden Plan addresses many of the issues outlined in the Green New Deal, with the addition of specific actions that a Biden administration would take should he be elected in November 2020.

We dug through both proposals to understand the nuances between the two, where they differ, and where they are the same.

Generally speaking, both policies establish a similar framework but differ in the specifics of how policymakers should go about enforcing and reaching defined goals. For example, both plans highlight the importance of clean, safe drinking water and community-driven projects that promote social and environmental justice in areas disproportionately impacted by the effects of climate change.

The greatest difference between the Biden Plan and the Green New Deal lies in their stances on the Paris Agreement, an international agreement established in 2015 with the central aim of coordinating and strengthening the global response to climate change and keeping the global temperature rise in this century below 2 degrees Celsius above pre-industrial levels. Whereas the Biden Plan promises a recommitment to the Paris Agreement, the Green New Deal does not mention it at all.

When it comes to clean energy, the Green New Deal and the Biden Plan are similar in that they aim to achieve 100% clean energy and net-zero emissions, but the former sets forth a 10-year mobilization deadline, whereas the Biden Plan sets a goal of no later than 2050. Both plans establish priorities for investment in clean energy innovation and research; however, the Biden Plan is far vaguer. The Green New Deal goes into greater detail, specifying that those investments should include infrastructure and industry, sustainable farming and land-use practices, zero-emission vehicle infrastructure, manufacturing public transit, removing greenhouse gas emissions from manufacturing and industry, and the research and development of new clean and renewable energy technologies.

Other key areas of overlap between the two plans include creating resiliency across the nation and committing to international policy and trade that employ strong labor and environmental protections.

According to his website, the Biden plan will be paid for by rolling back Trump tax incentives and will require a federal investment of $1.7 trillion over the next decade, leveraging the additional private sector and state and local investments to total more than $5 trillion. This estimated cost is significantly lower than the $100 trillion bill that Trump claimed the U.S. would foot during the debate. However, serious disagreement exists over how much implementation of the Green New Deal might actually cost.

After its 2019 introduction by U.S. Rep. Alexandria Ocasio-Cortez, D-N.Y., Republican leaders and some media publications cited research by the right-wing think tank American Action Forum that speculated the Green New Deal could cost up to $93 trillion, or an estimated $600,000 per household, in its first 10 years. (A supplementary brief from the organization outlining the projected costs can be found here.) But a number of financial experts have countered that research, suggesting that it is more likely that the Green New Deal would cost significantly less, and in some estimates half as much. In fact, a September 2020 study published in the journal Energy Research & Social Science suggested a total overall cost of just over $16 trillion over 15 years.

Though both the Biden Plan and the Green New Deal provide similar general frameworks for moving towards a cleaner economy and combating the effects of climate change at a national level, subtle differences exist between the two. Although Biden stated outright that he does not support the Green New Deal, it is apparent from his own policy statements that he supports elements of it that have been incorporated into his own plan. As such, we rate this claim as a "Mixture."