Is the Department of Defense Planning a Communications Drill to Coincide with 'Antifa' Demonstrations? 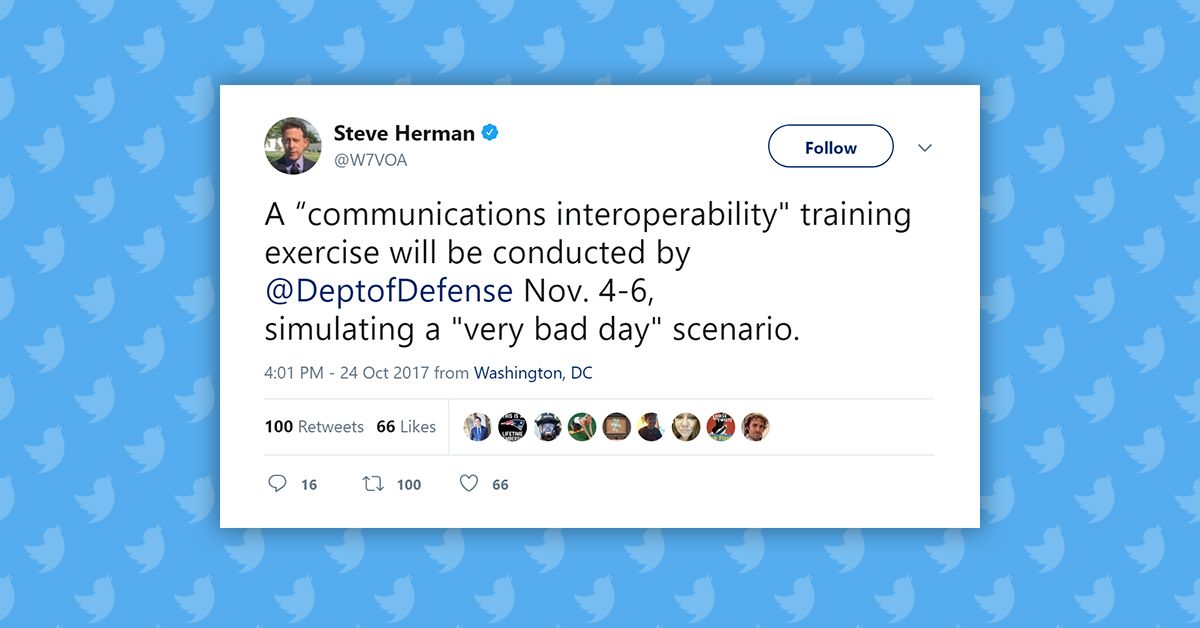 Claim:
The Department of Defense planned communications drills to coincide with "antifa protests" on 4 November 2017.
Rating:

In October 2017, rumors about violent anti-fascism protests intensified in conjunction with October 2017 announcements that the Department of Defense, alongside amateur ham radio association the American Radio Relay League (ARRL), had scheduled a "communications interoperability" exercise:

Elements of the US Department of Defense (DOD) will conduct a “communications interoperability” training exercise November 4-6, once again simulating a “very bad day” scenario. Amateur Radio and MARS organizations will take part.

“This exercise will begin with a national massive coronal mass ejection event which will impact the national power grid as well as all forms of traditional communication, including landline telephone, cellphone, satellite, and Internet connectivity,” Army MARS Program Manager Paul English, WD8DBY, explained in an announcement.

“We want to continue building on the outstanding cooperative working relationship with the ARRL and the Amateur Radio community,” English said. “We want to expand the use of the 60-meter interop channels between the military and amateur community for emergency communications, and we hope the Amateur Radio community will give us some good feedback on the use of both the 5-MHz interop and the new 13-MHz broadcast channels as a means of information dissemination during a very bad day scenario.

The date the training exercise was to begin coincided with a conspiracy theory which apparently originated with an amateur video from Kansas bounty hunter Jordan Peltz (who, despite the patch ironed onto his shirt, is not a law enforcement official). In the video, he warned — without any supporting evidence — that "antifa" had been planning a violent "Day of Rage" for 4 November 2017:

Paul English, the Army MARS program manager quoted in the press release, confirmed to us that it was a pre-planned training exercise:

Yes the ARRL announcement about this exercise is legitimate. The coronal mass ejection scenario is simulated ... notional. Resulting from the CME is the simulated...notional power and communication outages. These events are all notional ... simulated. There is no actual power or comms outages that will occur in conjunction with this exercise. We have done this exercise every quarter since 2013. Our primary focus is to work with the amateur radio operators to collect real world county status reports ... basically are the lights on...is water still running...how’s the medical situation at hospitals ... etc.

The average citizen will not even know this exercise is taking place. Our focus is to interoperate with the amateur radio community.

I hope this helps.

The Department of Defense bulletin was, naturally, rapidly picked up by conspiracy sites and presented as overly coincidental given its starting date:

According to The National Association for Amateur Radio (ARRL), elements of the US Department of Defense (DOD) will simulate a “communications interoperability” training exercise across the United States on November 04-06. The announcement released on October 24 has not been widely distributed to the media, because the drill is simulating a total grid collapse and could spark public fear ...

Bizarrely enough ... the US Department of Defense (DOD) training exercise will occur on ANTIFA’s day of rage across the United States.

Readers also asked about different variations of the rumor on Facebook and Twitter, most of which claimed that an extended loss of power would occur:

Please hurry with this one. Is there really going to be an electric pull that will last November 4-6?

I found this video on Facebook. Tried researching, but came up with nothing. [link]

Are all the lights and water gonna be off.my baby would be in danger.

Hello I'm really scare of what's going to happen on November 4-6. Are we not going to have light for thoes days? I live in a bad place and I have kids what can I do?? Go to a police station?? For those days

Will there be a black out on November 4th through November 6th?

On 25 October 2017, the Army Military Auxiliary Radio System Facebook page published a version of the announcement, and in a comment responding to a number of concerned people, the page clarified the purpose of the exercise:

In this exercise Amateur Radio operators are conducting a routine training that we do four times a year. The purpose of the training is to prepared for an event we hope will never happen, but should be ready for if it ever does. These exercises are all about coordinating existing capabilities like amateur radio, and citizen volunteers like MARS members, to be a productive part of the solution in the event something like a severe solar storm ever happens.

To answer some of the questions:

c. No, we did not plan this to coincide with any particular protest. The date for COMEX 17-4 was set more than a year in advance. Keeping track of the various protest groups calendar of events is more than a little out of our lane.

d. Yes, will will actually practice a solar storm scenario, go off the air, protect our radio equipment. After the notional storm, we will practice using emergency power (at least for a little while just to say we can, but not long enough to waste gasoline since the electrical service will actually still work), and of course establish radio contact with Amateur Radio Operators throughout the United States.

e. No, there will not really be a solar storm. We are just simulating that too.

f. If you are a US citizen, YOU can help by becoming an Amateur Radio Operator. Check out www.arrl.org for information about becoming a ham. If you are already an Amateur Radio operator, learn as much as you can about using High Frequency radio. Build an effective station. Use the 60 meter band. Become proficient with your computer, learn to restore your software and operating system, learn how to set up and maintain basic networks. If you have done that, and want to do more, join MARS. Go to the link and fill out the on line form. https://www.usarmymars.org/home/applications-and-forms You will have to train, A LOT, use new digital modes and procedures. You will solve problems, and make a lot of new friends in your team. Most of all, you will be part of the solution to big problems like how to recover from a severe solar storm.

In response to our e-mail inquiry about the rumors, Paul English explained that no loss of power would take place, and that such training exercises have been held quarterly for years:

Thanks for your email. Yes the ARRL announcement about this exercise is legitimate. The coronal mass ejection scenario is simulated ... notional. Resulting from the CME is the simulated ... notional power and communication outages. These events are all notional ... simulated. There is no actual power or comms outages that will occur in conjunction with this exercise. We have done this exercise every quarter since 2013. Our primary focus is to work with the amateur radio operators to collect real world county status reports ... basically are the lights on ... is water still running ... how's the medical situation at hospitals ... etc.

The average citizen will not even know this exercise is taking place. Our focus is to interoperate with the amateur radio community.

Other variations of the rumor included references to an old, phony claim that NASA had announced that there "15 days of darkness" would fall during that period:

There are claims of an electro magnetic pulse being done by the gov't on Nov 4 thru the 6th 2017 that will disable everything using electricity. The claims state there is info on the DoD website concerning this. (I couldn't find anything to that affect.) Claims state the entire North American continent will affected by this EMP and we all need to be prepared with water and canned foods for at least a week.

Also the same claim states there will be total darkness from Nov 15 thru the 30th 2017 and everyone should be prepared not only with food and water, but with ammunition and firepower.
Please advise.

That version of the rumor originated as fake news, well before any antifa protests were rumored or scheduled.