No, a study didn't prove doctors are more deadly than guns. 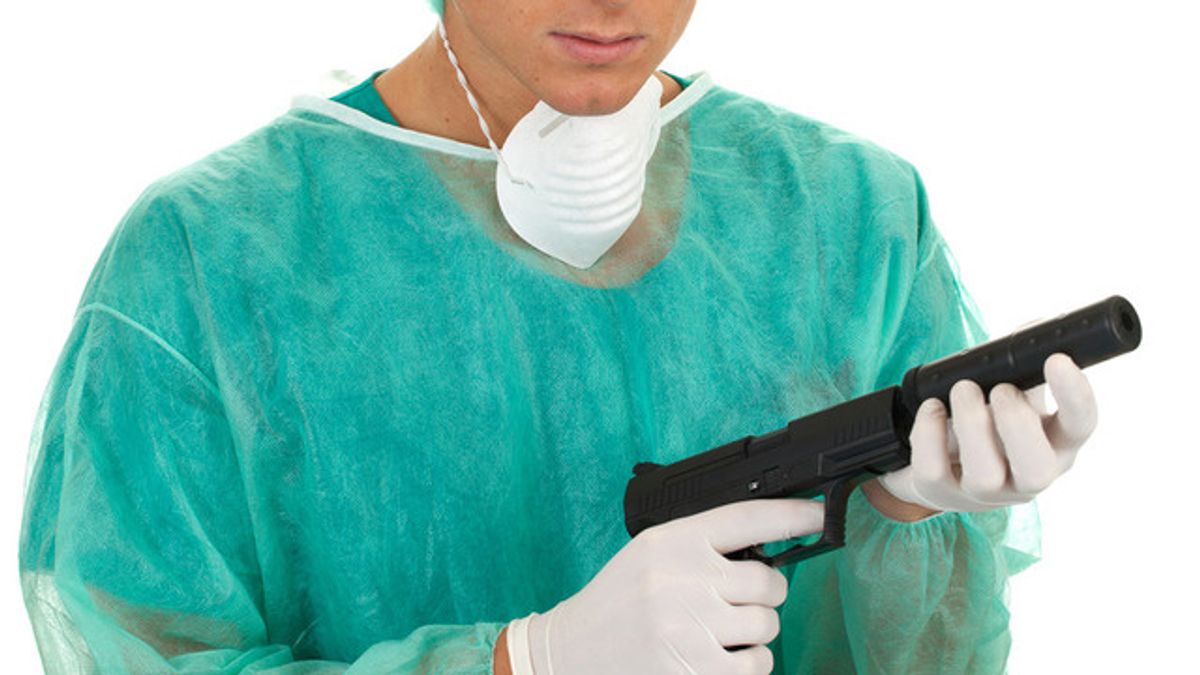 Claim:
A study proved you're thousands of times more likely to be killed by a doctor than a gun in the United States.
Rating:

Among those rumors were an ancient e-mail forward commonly titled "Doctors vs. Guns" or "Fun with Statistics." As excerpted above, the claim compares unsourced numbers of deaths attributable to doctors vs. accidental gun deaths, and concludes that Americans were 2,450 to 9,000 percent more likely to be killed by doctors than guns. The rumor and its iterations were elderly by Internet standards at the time of its 2016 circulation: our earliest online sighting of this piece dates from February 2004, but a pprinted newsletter dated 2003 [PDF] included the same material, describing the information as a joke obtained from the Internet (dating it to at least 2002 and making its updated "citations" suspect):

A common aspect of early versions of this item its labeling as a joke or funny e-mail forward, not a straightforward comparison of credible or serious statistics. That framing was underscored by the ambiguity of its quantitative units and descriptors, along with vague mentions of statistics compiled by the Federal Bureau of Investigation (FBI) or Department of Health and Human Services (HHS). To that point, actually determining whether the numbers cited had any basis in reality was challenging, as there was no year given in which either number might have originated.

Viewed through that lens, the numbers were barely worth quantifying: the basic gist was that doctors were far more likely to accidentally kill another person than a responsible gun owner. The text didn't specify what constituted "accidental deaths caused by physicians" or details whether that figure included only clear malpractice or all deaths remotely linked to medical treatment (including folks who would have died irrespective of medical attention).

At some point after its presentation as a joke in 2003 to 2004, the claim evolved from humorous to straightforward. On 31 January 2013 Natural News' "Health Ranger" Mike Adams penned a column titled "Doctors kill 2,450% more Americans than all gun-related deaths combined," the assertions of which paralleled the claims of the original humorous e-mail:

It's true: You are 64 times more likely to be killed by your doctor than by someone else wielding a gun. That's because 19,766 of the total 31,940 gun deaths in the USA (in the year 2011) were suicides. So the actual number of deaths from other people shooting you is only 12,174.

Doctors, comparatively, kill 783,936 people each year, which is 64 times higher than 12,174. Doctors shoot you not with bullets, but with vaccines, chemotherapy and pharmaceuticals ... all of which turn out to be FAR more deadly than guns.

This is especially amazing, given that there are just under 700,000 doctors in America, while there are roughly about 80 million gun owners in America.

How do 700,000 doctors manage to kill 783,936 people each year (that's over one death per doctor), while 80 million gun owners kill only 31,940? Because owning a gun is orders of magnitude safer than "practicing" medicine!

Adams asserted the numbers reflected "over one death per doctor," whereas the original placed that figure at 0.171. The article was accompanied by a cherry-picked infographic, which in part cited a separate Natural News article: One of the two other citations was from a supplement sales company's March 2004 article "Death by Doctor," which purportedly supported the figure of doctor-caused deaths. An excerpt from that article read more like a vitamin sales pamphlet than a study or other credible research:

Natural medicine is under siege, as pharmaceutical company lobbyists urge lawmakers to deprive Americans of the benefits of dietary supplements. Drug-company front groups have launched slanderous media campaigns to discredit the value of healthy lifestyles. The FDA continues to interfere with those who offer natural products that compete with prescription drugs.

These attacks against natural medicine obscure a lethal problem that until now was buried in thousands of pages of scientific text. In response to these baseless challenges to natural medicine, the Nutrition Institute of America commissioned an independent review of the quality of “government-approved” medicine. The startling findings from this meticulous study indicate that conventional medicine is “the leading cause of death” in the United States .

What you are about to read is a stunning compilation of facts that documents that those who seek to abolish consumer access to natural therapies are misleading the public. Over 700,000 Americans die each year at the hands of government-sanctioned medicine, while the FDA and other government agencies pretend to protect the public by harassing those who offer safe alternatives.

Neither Natural News nor the vitamin sales company detailed the means by which they concluded that 700,000 Americans died each year due to medical accidents (Natural News' infographic cited only themselves and the LifeExtension nutritional supplement company as sources), and on 1 February 2013, the Inquisitr published an article in which the dodgy Natural News infographic was incredibly described as a "study":

US Department of Health and Human Services statistics were used to compile a Natural News infographic about doctor related deaths versus gun crime figures. There are currently 700,000 doctors in the United States. According to the study, there are 120,000 accidental deaths caused by doctors each year. The infographic of accidental doctor deaths notes that medial errors accounted for 98,000 deaths.

We were unable to locate any matching study, nor any statistics compiled by the HHS at any point in time pertaining to "doctor-related deaths" (as it didn't appear that agency maintained such records). In September 2013, NPR published a piece that cited some more tangible data on medical mistakes:

In 1999, the Institute of Medicine published the famous "To Err Is Human" report, which dropped a bombshell on the medical community by reporting that up to 98,000 people a year die because of mistakes in hospitals. The number was initially disputed, but is now widely accepted by doctors and hospital officials — and quoted ubiquitously in the media.

Now comes a study in the current issue of the Journal of Patient Safety that says the numbers may be much higher — between 210,000 and 440,000 patients each year who go to the hospital for care suffer some type of preventable harm that contributes to their death.

Even then, as NPR noted, the estimates were perpetually in dispute, partially due to the fact that such figures are next to near impossible to quantify:

Asked about the higher estimates, a spokesman for the American Hospital Association said the group has more confidence in the IOM's (Institute of Medicine's) estimate of 98,000 deaths. ProPublica asked three prominent patient safety researchers to review James' study, however, and all said his methods and findings were credible.

What's the right number? Nobody knows for sure. There's never been an actual count of how many patients experience preventable harm. So we're left with approximations, which are imperfect in part because of inaccuracies in medical records and the reluctance of some providers to report mistakes.

In short, there's absolutely nothing close to a solid figure on deaths by medical error per year. At best, experts have settled on a range of 98,000 to 440,000, but no one knows whether those numbers are grossly exaggerated or horribly underestimated.

The CDC's data tool returned the updated number of 591 accidental gun deaths in the U.S. in 2011, matching the statistics we located on GunPolicy.org. That same tool enabled us to pull a solid number of deaths by adverse event for that same year (2011), either by prescribed drugs or medical care. That number was actually 2,584, which was not only far lower than the numbers estimated in contemporaneous research, but also than the unsourced count of 700,000 which appeared in the original joke e-mail forward before it transmuted to become a "study."

Finally, whatever the real numbers might be, trying to draw meaningful conclusions based on the number of accidental deaths per doctor or per gun is a very, very poor metric, because those measurements don't take frequency into account (i.e., how often one is in a position to be killed by a doctor or a gun in the first place). When we want to analyze statistics regarding fatal traffic accidents, for example, we typically don't look at the number of deaths per automobile, because some automobiles are on the road much more than others; instead, we look at the number of deaths per mile driven. So to make a valid comparison between doctors and guns, we would need to know the number of times the average person is typically treated by a doctor per year, as well as the number of times the average person is within range of a gun that could be accidentally discharged, and take those factors into account.

In any case, the e-mail forward reproduced above was never intended to be taken seriously as a legitimate comparison of deaths caused by doctors versus deaths caused by guns. The sheer number of variables makes such a comparison completely meaningless though any imaginable manipulation of the underlying statistics, and the root claim that 700,000 Americans die each year due to medical mistakes appears to be cut from whole cloth. As such, this once-humorous meme remains false.