Wearable technology branded the 'Cicret bracelet' claims to project your smartphone directly onto your forearm. 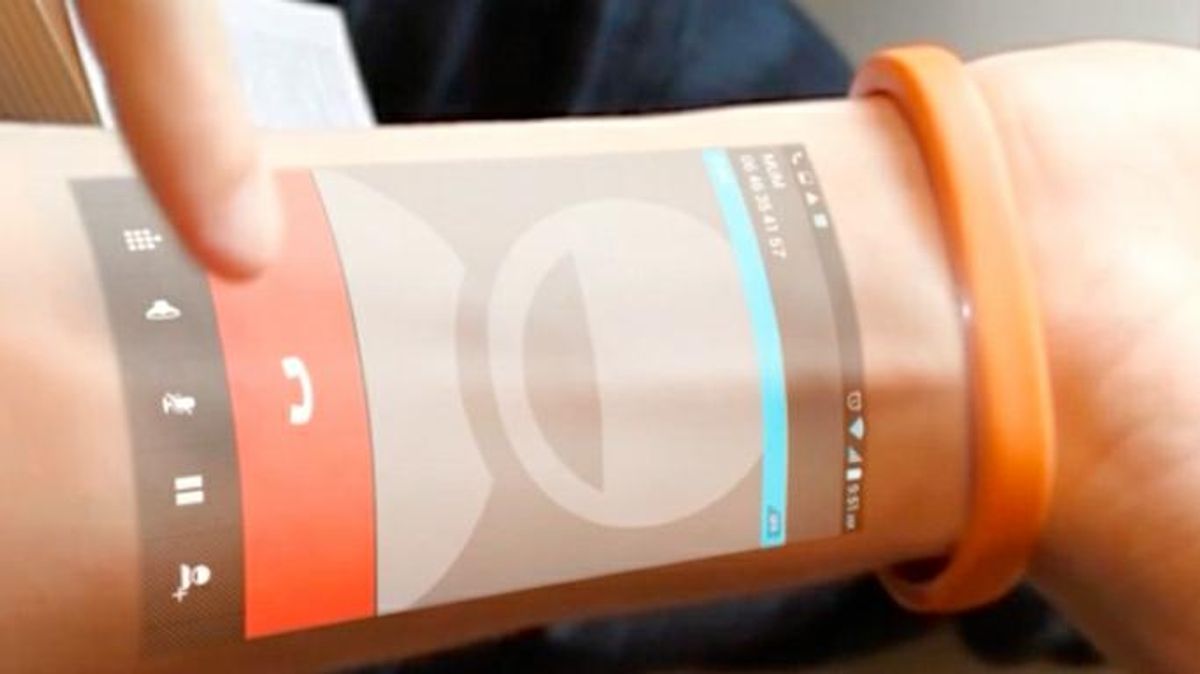 Claim:
The Cicret bracelet and app can project your smartphone onto your arm.
Rating:

With the Cicret Bracelet, you can make your skin your new touchscreen. Read your mails, play your favorite games, answer your calls, check the weather, find your way ... Do whatever you want on your arm.

The clip showcased some impressive technology that eliminates a number of inconveniences experienced by smartphone users: The Cicret Bracelet enables submersion in water (as evidenced by a portion of the video's taking place in a bathtub) and, as described by ZDNet, allows users to enjoy device functionality even when their handsets are out of reach:

It will use a tiny 'pico projector' and eight miniature proximity sensors to replicate an image of your device screen on to your arm.

Low energy Bluetooth will communicate with your mobile device. A Wi-Fi component will connect you to the network. It will have a vibrate function and a micro USB charging port.

Touching your arm with your finger will interrupt one of the sensors and return the instruction back to the Cicret bracelet.

Flicking your wrist will initiate the display on your arm. The Cicret bracelet will be water resistant and durable. Flick, swipe, pinch and zoom functionality will be supported along with tap to text. You will even be able to answer the phone with a flick of your wrist.

The Cicret App and Bracelet was lauded by tech bloggers as the next stage of smartphone connectivity, and videos and articles about it were widely shared on social media sites. But if your first impression was the device looked like something out of science fiction, you weren't entirely wrong. A number of skeptical users had some pointed questions about the Cicret claims, and among the more logical queries (such as how the device might work for people with dark skin or abundant arm hair) was a far more central mystery: does the Cicret bracelet actually exist?

Viewers of the video were quick to notice the device as shown appeared to have been cobbled together from recognizable existing products. Some observed extant advances don't allow for such capabilities to be contained within a device as small as the one depicted, and others noted the projection quality seemed remarkably high.

As it turned out, the Cicret bracelet did not actually exist, and no working prototype of it had yet produced. In a 2014 report from Washington television station WTOP, Cicret Guillaume Pommier reluctantly confirmed the impressive video produced was a mockup not representative of any functional prototype device:

"The video we put online is an illustration of what our Cicret Bracelet could allow users to do," says Pommier.

Pommier says he and three partners are trying to raise money on their own, through PayPal instead of standard crowdfunding vehicles such as Kickstarter.

"We need someone who'd put up some money to allow us to finish a prototype," says Pommier.

That report highlighted additional areas of concern about the project, specifically a lack of transparency and the anonymity of its creators:

The site contains a brief "About Us" description of the principals, with no descriptions of their previous projects. The website site lists no street address or phone number for the a Gmail address.

Asked about the lack of information on the company's website, Pommier has an answer: "To be honest it's because of 4 on our team are actually working for another company. Obviously we don't want to be fired because of this second professional activity!"

Cicret has since addressed some of those concerns, adding a physical address and a listing of their team member's names, photos, job titles, and addresses to their web site, and producing a video that purports to show a (decidedly less visually impressive) functioning prototype of their virtual bracelet that works with all skin colors:

Although the Cicret bracelet and app may not be impossible to develop with current technology, it's also not a device that actually exists at this stage. While an eventual working Cicret could one day be real, it's also possible the concept will graduate to the realm of vaporware.