While some studies have found that vegetarians have longer lifespans, the question is difficult to research and certainty on the issue remains elusive. 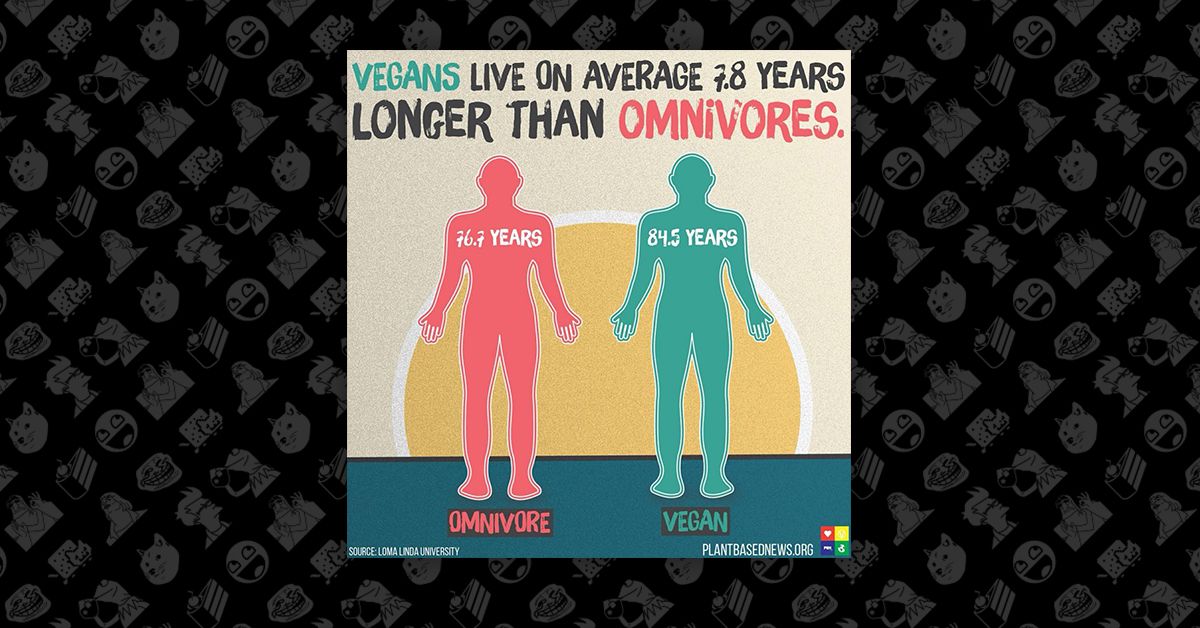 A popular topic of debate on Facebook timelines (and around family dinner tables) is whether or not it is healthy to eschew eating meat. Well-informed advocates of the practice will likely eventually point to scientific research demonstrating that vegans or vegetarians live longer lives than their omnivorous counterparts; most likely, the results they cite have their origins in a long-term study of Seventh Day Adventists.

The survey, a well known epidemiology project undertaken by Loma Linda University, compares the health metrics and life outcomes of a large population of Seventh Day Adventists, a religious group noted for promoting a strict and healthy lifestyle, to the general population. The first Adventist Health Study utilized data collected from 1976 and 1988, and a second study — Adventist Health Study 2 — is underway as of December 2017:

Adventist Health Studies are long-term studies exploring the links between lifestyle, diet, and disease among Seventh-day Adventists. More than 96,000 church members from the U.S. and Canada are participating in the current study, AHS-2, conducted by researchers at the Loma Linda University School of Public Health.

A 2001 study published in the Journal of the American Medical Association (JAMA) based on data from the first Adventists Health Study provides the basis for most vegetarian longevity claims. The study provides a comparison between Adventists’ and non-Adventists’ longevity by diet type:

The average of those two numbers — 6.1 years and 9.5 years — is 7.8 years, the length of time referenced by a popular, if not quite accurate or precise, meme (the numbers refer to vegetarians, not vegans): Researchers at Loma Linda published a follow-up paper in 2013, but their earlier figure is still frequently cited, in part because its findings offer the perception of being unambiguous. The 2013 study, which includes more recent data, found a similar association, but was more muted in its treatment of a potential direct causation between vegetarianism and longevity. The authors of the study suggested its results, presented here as a chance of death over a given study period, may not be directly applicable to other populations:

Observed mortality benefits may be affected by factors related to the conscious lifestyle choice of a vegetarian diet other than dietary components. [...]

Caution must be used in generalizing results to other populations in which attitudes, motivations, and applications of vegetarian dietary patterns may differ; dietary pattern definitions used may not reflect some common uses of these terms.

Seventh Day Adventists are not the only people scientists have used in an effort to investigate this question. A study in 2015 of more than 60,000 people in the United Kingdom, part of the European Prospective Investigation into Cancer and Nutrition–Oxford (EPIC-Oxford) survey, found that vegetarianism provided no overall reduction in risk of early death, though it found that some low-meat diets reduced the risk of death from specific ailments:

In this analysis of mortality by diet group in a population with a high percentage of vegetarians and others who eat little or no meat, we found no significant differences in all-cause mortality between the diet groups.

A 2017 paper that analyzed similar health metrics for over 240,000 Australians, part of the “45 and Up Study”, similarly found no increased longevity from avoiding meat:

We have shown in a large population-based Australian cohort that there is no difference in mortality between vegetarians and non-vegetarians. The results of our study seem consistent with other studies and meta-analyses which have shown that in non-selected populations a vegetarian diet is not associated with reduced mortality.

In a piece discussing the results of the Australian survey at The Conversation, co-author Melody Ding explained why this question is, from a methodological standpoint, difficult to study:

It’s standard practice in epidemiological studies to statistically control for various factors (we call them “confounders” as they may confound an association). We controlled for a number of factors to get a true sense of whether vegetarianism by itself reduces risk of death.

It’s important to acknowledge that in most studies vegetarians tend to be the “health-conscious” people, with overall healthier lifestyle patterns than the norm. [...] In most previous studies, vegetarians did have lower risk of early death from all causes in unadjusted analysis. However, after controlling for other lifestyle factors, such as the ones listed above, the risk reduction often decreased significantly (or even completely vanished). [...] This suggests other characteristics beyond abstinence from meat may contribute to better health among vegetarians.

While an increasing number of studies are skeptical of a direct correlation between vegetarianism and longevity, the question remains controversial in epidemiological research. Therefore, we rank claims that vegetarians live longer than meat eaters as unproven.

Ding, Melody.   "Do Vegetarians Live Longer? Probably, But Not Because They’re Vegetarian."     The Conversation.   1 February 2017.