After Sanders delegates participated in a DNC Walkout, claims about empty seats became a point of debate on social media. 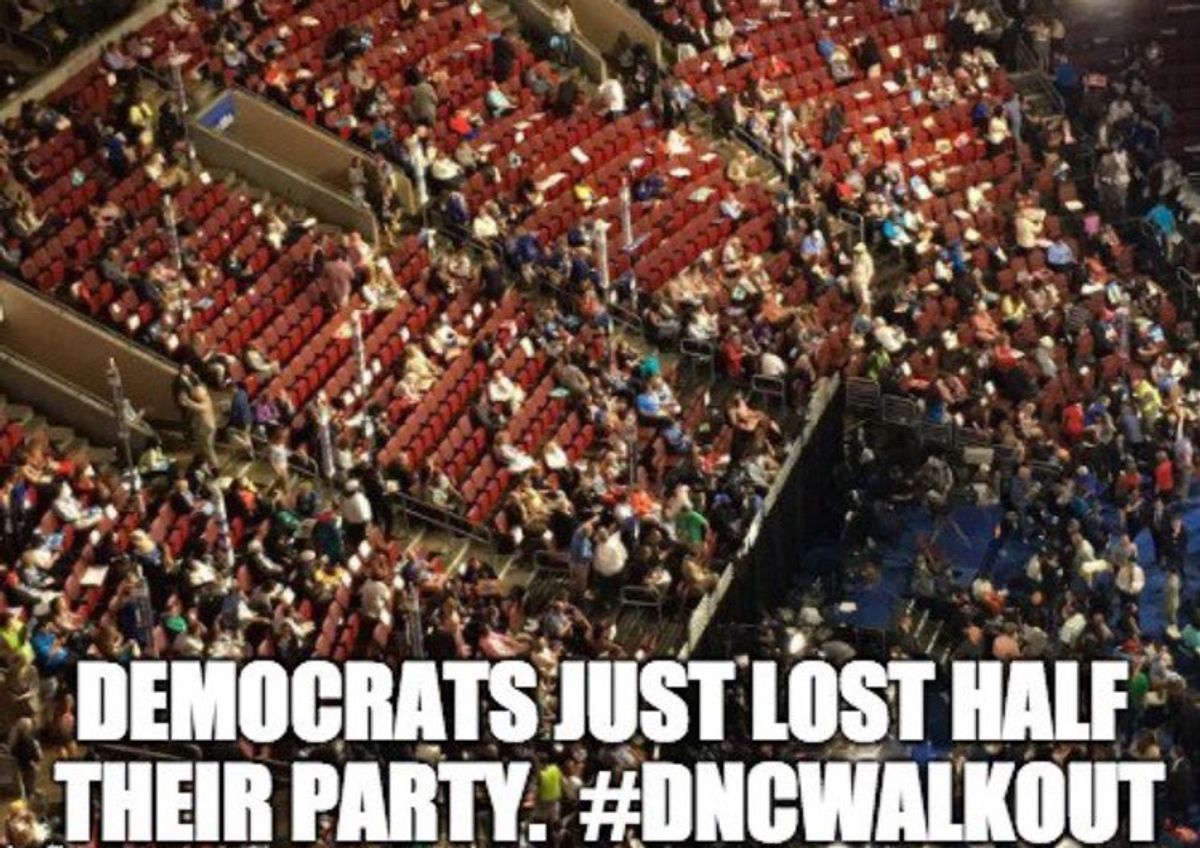 Claim:
After the 26 July 2016 roll call vote at the Democratic National Convention, hundreds of empty seats appeared to have been vacated by a planned protest.
Rating:

Whether images of empty seats are attributable to the impact of the walkout.

On 26 July 2016, the Democratic National Convention held a roll call vote to solidify the nomination of Hillary Clinton. When presidential candidate Bernie Sanders' state of Vermont went last to symbolically cede the win to Clinton, what appeared to be hundreds of his pledged delegates streamed out of the hall in a planned walkout.

The protest itself was well documented, as the delegates gathered in the DNC's press tent at the start of their demonstration and multiple clips of the DNC Walkout emerged. Prominent Sanders supporters shared images of what appeared to be a sea of empty seats shortly after the roll call vote:

the empty seats that were once full. after they announced #HRC's nomination. #philadelphia #DNC… https://t.co/N2t98G3QCh — Shailene Woodley (@shailenewoodley) July 27, 2016

The walkout was apparently organized by the "Coalition of 57," a network of Sanders delegates, who issued a press release about the protest:

This evening during the Democratic National Convention’s floor session Bernie Sanders delegates initiated the occupation of the media tent for the purpose of ensuring that the intentions of Bernie supporters nationwide are heard in the efforts to reform and make the Democratic party stronger through genuine unity.

The Coalition of 57, a grassroots communication network of Bernie delegates from across the country, issued the following message: “The Democratic National Committee has actively introduced bias into the process of the Democratic Primary contest for a Democratic presidential nominee. This is contradictory to the spirit and intent of the party charter and ideal of being a 'big tent' party."

However, supporters of Clinton maintained the seats were empty due to delegates' leaving the hall for dinner:

@edatpost Even CA has a lot of empty seats but only bc roll call vote is over & people grabbing dinner! Not a walk out!! — Asm. Luis Alejo (@AsmLuisAlejo) July 27, 2016

Reports from the floor about the permanence of the DNC Walkout remained conflicting as the night wore on. Some maintained that the delegates retook their seats, while others said that the chairs remained empty into nighttime programming:

@AbbyMartin @edatpost All of those seats have been filled if you are watching the live shots 11pm EST. — Bidupedo (@bidupedo) July 27, 2016

Josh Fox, the filmmaker depicted in the above video, surmised that not all walkouts were solely in protest:

"I think some ppl left in protest but I think most ppl left bc they were demoralized," Sanders backer @joshfoxfilm says #DNCinPHL — Rosa Goldensohn (@RosaGoldensohn) July 27, 2016

As the events played out, members of the press reported a chaotic scene with scattered accounts of rescinded access:

Not long after, Woodley tweeted out a screenshot of a purported text message seeking delegates to fill empty seats in the California delegation's section. The authenticity of the text wasn't confirmed:

this was sent 2 delegates 2 fill in seats so it didn't look so empty.amazing how easy it is 2 breed false narratives pic.twitter.com/YANWlOWLxN — Shailene Woodley (@shailenewoodley) July 27, 2016

As of 27 July 2016, numerous sources stated that delegates who left in the DNC Walkout did not return, but it was not clear how many, and whether any planned to return.