Did Novak Djokovic Tell Simone Biles That 'Pressure Is a Privilege'?

The tennis champion also threw tantrums on the court during the Tokyo Olympics in 2021. 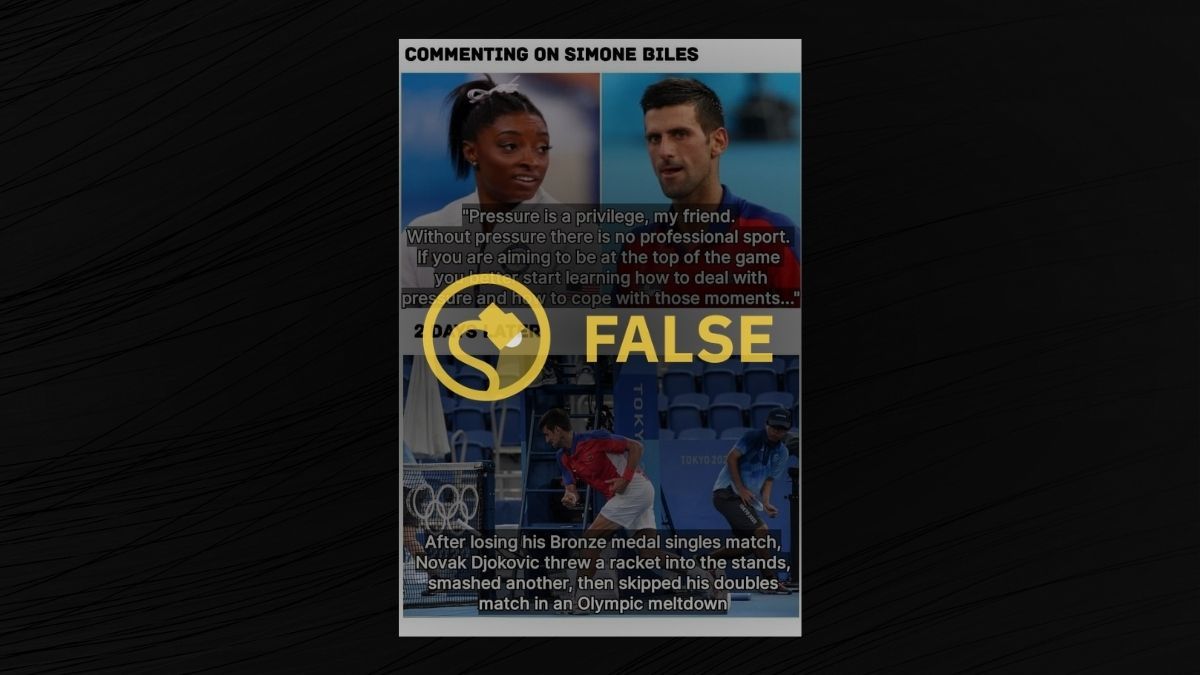 Claim:
Serbian tennis star Novak Djokovic commented on American gymnastics star Simone Biles’ mental health struggles by saying, “Pressure is a privilege, my friend ... If you are aiming to be at the top of the game you better start learning how to deal with pressure.”
Rating:

Although Djokovic indeed made the statement attributed to him in response to a question from the press, it was neither addressed to Biles nor intended as a comment on her withdrawal from some events.

Mental health has been a big topic of discussion at the 2021 Olympics in Tokyo, particularly after U.S. champion gymnast Simone Biles withdrew from some events citing mental health struggles.

Her withdrawal subsequently drew comparisons with Serbian tennis star Novak Djokovic, who threw a tantrum during a match on July 31, 2021, and smashed his racket.

A meme claimed that only a few days prior to his “meltdown” he criticized Biles’ withdrawal, saying: "Pressure is a privilege, my friend. Without pressure there is no professional sport. If you are aiming to be at the top of the game you better start learning how to deal with pressure and how to cope with those moments..." While Djokovic did say those words in response to a question by a journalist, he was not referring to Simone Biles. Reuters reporter Sudipto Ganguly said he did ask Djokovic a question in which he (Ganguly) referenced Biles.

Ganguly tweeted out his question after reports misrepresented Djokovic’s comments: "Novak, you would've heard about Simone Biles yesterday talking about mental health and the pressure of performing. You are in this position going for the Golden Slam, you know, there is no more pressure on a tennis player than you currently. Can you speak a bit about it?"

Pressure is a privilege. Without pressure there is no professional sport. If you are aiming to be at the top of the game you better start learning how to deal with pressure. And how to cope with those moments on the court but also off the court, all the expectations.

The star was talking about the pressures of being in the running for the Golden Slam, a title earned by a tennis player who has won all four Grand Slams and an Olympic Gold in one year and not talking about Biles, even though she was referenced in the question. Steffi Graf is the only tennis player in history who has achieved a Golden Slam.

A few days after these comments, Djokovic lost his cool and left the Olympics empty-handed, after three defeats and dropping out of the mixed doubles citing a shoulder injury.

But it is not the first time he has talked about pressure being a privilege. He attributed the statement to Billie Jean King in an older interview. “Pressure is a Privilege” was also the title of King’s 2008 autobiography. He makes the comment around a minute and 30 seconds into the video:

Given that the context and intent of Djokovic’s statement were misrepresented, we rate this meme as “False.”