This luxurious, patented, all-metal diving suit featured the latest in deep-sea technology, including automobile headlights on its shoulders. 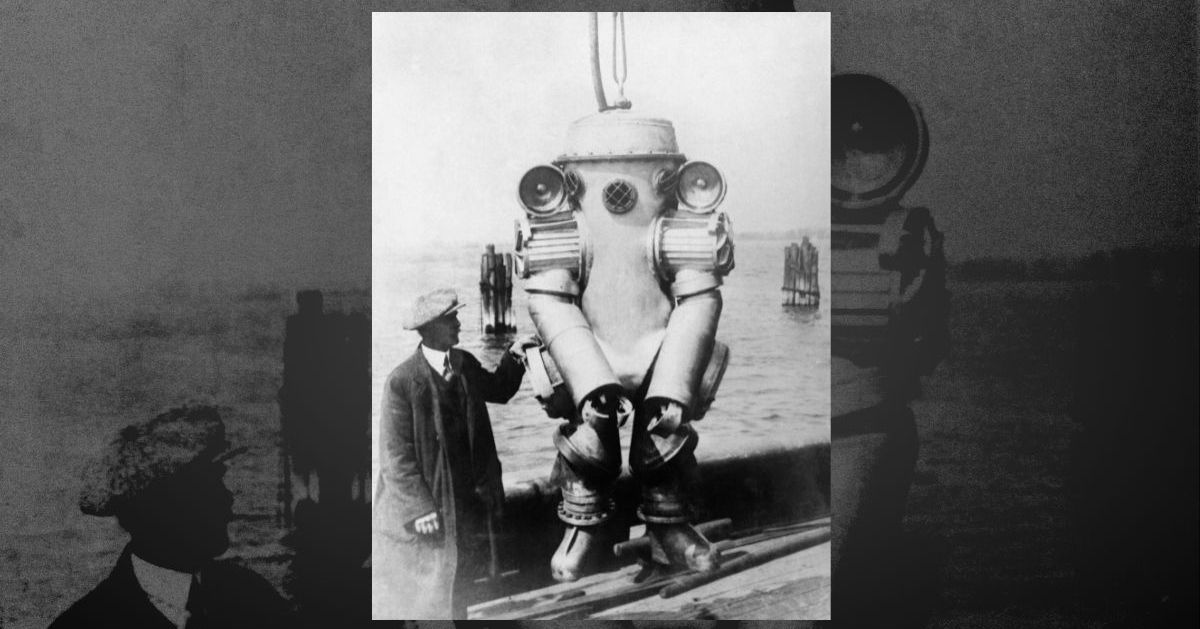 Image Via Gamma-Keystone via Getty Images

Claim:
A vintage photograph authentically shows a deep-sea diving suit that existed in the 1920s.
Rating:

A vintage photograph perennially shared on social media purports to show an actual deep-sea diving suit from 1925 that looks more like a mash-up of the Tin Man from "The Wizard of Oz" and Robby the Robot, the clunky (but lovable) robot character in the 1956 science fiction film "Forbidden Planet." Here's the photograph as posted on Facebook:

As we'll document below, both the photograph (which actually dates from 1931) and the suit are genuine.

But let's talk first about about why people seem to find this picture so shareworthy. Is it because in 1925 full-body diving suits were a novelty? No, because they weren't. What's known as a "standard diving dress" — consisting of a metal helmet, a hose to supply air pumped in from the surface, a canvas diving suit, and boots — was developed in the 19th century and in wide use by the early 20th. The photograph below shows a well-worn standard diving suit in use in the 1920s and '30s. It's likely what most people picture when they think of vintage, deep-sea diving gear. The differences between standard diving dress and the rigid, robot-like contraption in the viral photo are readily apparent. Some people may be shocked to learn that the latter was real.

"Submarine armor," as the all-metal diving suit equipped with special rotary joints for mobility was dubbed in the title of its 1914 patent application, was intended by its inventor, Harry L. Bowdoin of New Jersey, to offer divers a stronger, more efficient alternative to the standard dress for accomplishing underwater tasks, particularly in very deep water. It was also intended to enrich the inventor himself. According to its prospectus, "The Deep Sea Salvage Corporation," a company Bowdoin started in 1916, "has been organized to construct and operate a metal diving suit to be used for deep sea diving, locating and recovering specie and other valuables contained in the cargoes of sunken ships at depths which it has been impossible to reach with the diving apparatus ordinarily in use." A laundry list of Bowdoin's planned deep-sea, fortune-hunting destinations took up more than half of a May 1916 article about him in Vermont's Rutland Daily Herald.

It took Bowdoin 12 years to build and perfect the suit, which in the end weighed 1,400 pounds and was all too often described in the press as a "robot." (The viral Facebook photo can also be found on Getty Images, where it has a caption identifying the man standing beside the suit as the inventor himself.) Bowdoin launched his first actual expedition in search of tens of millions of dollars worth of sunken treasure in 1928, at the age of 60. "The inventive Long Islander was not over-willing to talk of his brain-child and the feats he hopes to accomplish," reported the New York Daily News in April of that year. "Wait until I get the money," Bowdoin told the paper.

Though Bowdoin's "submarine armor" performed as he expected under deep-sea conditions, it doesn't appear that his fortune-hunting ventures resulted in that much success. When he died in 1935, his obituary made much of Bowdoin's diving apparatus and a new expedition on which he was preparing to embark, but had little to say about the outcomes of his previous attempts to recover sunken treasure. Except, the obituary noted, a voyage two years prior yielded nothing but an empty safe.