Disney Channel Not Shutting Down in US, Nor Is It 'Set to Cease All Broadcasts'

We looked into the origins of a strange rumor that appeared to claim Disney Channel would be shutting down in the U.S.

Claim:
Disney Channel is shutting down in the U.S.
Rating:

In early December 2022, we received mail from our readers that asked if a rumor was true that Disney Channel would be shutting down in the U.S. and was "set to cease all broadcasts." The good news for Disney fans was that this was both misleading and false.

We've been reporting about Disney rumors for nearly 30 years. One of our past articles was about another Disney Channel rumor that said the company previously broadcast a violent movie for kids that was partially set in a North Korean prison camp. Believe it or not, this was true.

As for the claim about Disney Channel shutting down, the false rumor started after a Disney blog named Inside the Magic published a story on Dec. 2 with the headline, "Disney Channel Set to Cease All Broadcasts." Social media posts on the official pages for Inside the Magic read, "The drastic decision goes into effect this month." 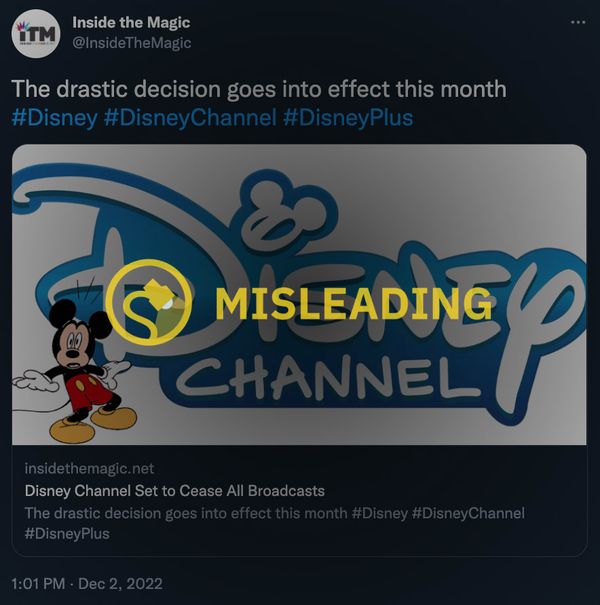 The truth of this story wasn't revealed until the fourth paragraph of the article. That truth was that this news only applied to Disney Channel viewers in Russia. There's no indication that Disney Channel will soon be shutting down in the U.S.

Inside the Magic is an English-language Disney blog. Its domain name, insidethemagic.net, was registered on a U.S. registrar. These and potentially other factors led readers to believe this "set to cease all broadcasts" news was about Disney Channel in the U.S.

Facebook users called the headline "clickbait" when adding comments under posts on Inside the Magic's official page. "This page is a complete joke and only posts stuff to get you to click on it," one user said. "It's sad that Inside the Magic has turned into bait and click," another person commented. Other comments asked the website to change the story's headline, with one person writing, "Really need to fix the title of this article. Morons." 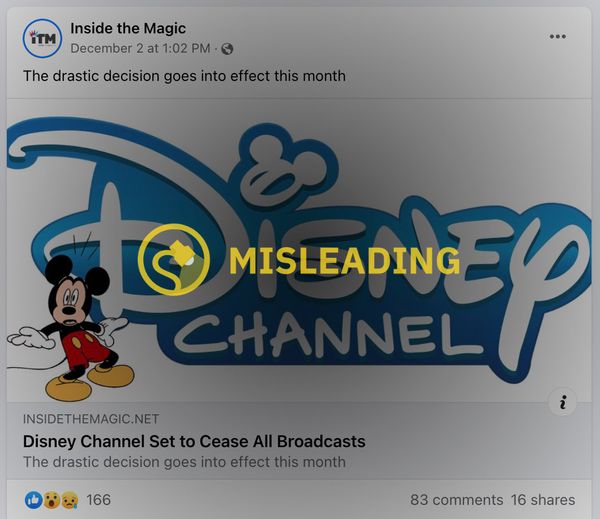 Meanwhile, on Twitter, users responded to the tweets from Inside the Magic. "What a joke of a headline. This is only in Russia," one person replied. "Very misleading headline… waste of time reading this," another user said.

"This is such a bad-faith clickbait headline," a different Twitter account replied. "It's only ceasing its broadcasts in Russia, not anywhere else. This gives the implication it was all over without giving specifics. No wonder people hate this site."

Users reacted similarly to other news back in October when Inside the Magic reported the headline, "Universal Studios Orlando Closes Location Permanently." However, as we reported, Universal Studios Florida was not closing, as some readers had believed after seeing the headline. The article was simply about how a single shop would potentially be moving to a different spot on the company's property.

Unlike Inside the Magic, Reuters published a story about the Disney Channel news that included Russia in its headline. The headline read, "Disney Channel to stop broadcasting in Russia from Dec. 14 - Kommersant." The article said that "it will be replaced by a new children's channel called 'Solntse,' which means 'sun' in Russian."