During a Hurricane, Should You Store Important Items in Your Dishwasher?

Appliance experts and flooding victims advise against storing valuables in a dishwasher during a hurricane. 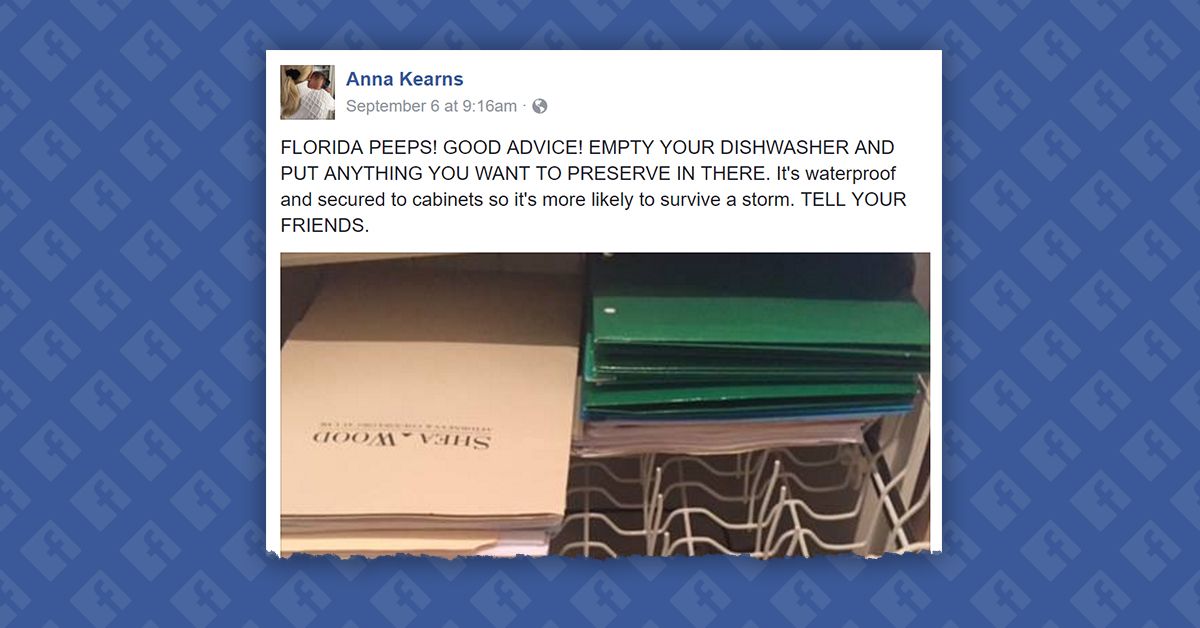 Claim:
Dishwashers are a reliably safe place to store valuable documents and photographs during hurricanes or flooding.
Rating:

On 6 September 2017, as Hurricane Irma swept across the Caribbean and towards southern Florida, a Facebook user posted the advice that a dishwasher is an ideal spot to hide valuables during a hurricane:

The post had racked up over a million shares within a few days, and its advice even wound up on several news roundups of "hurricane hacks":

Your dishwasher can be a waterproof safe: It's sealed to keep water in, so it should do just fine keeping it out too. Just make sure all your dishes are taken out before loading up important documents or belongings.

The post did not cite any manufacturer, disaster expert, or government agency as vetting the proffered advice, and the reasoning provided ("it's secured to cabinets") sounded more like observation than credible information. And the owner of an appliance repair shop told the Tampa Bay Times in September 2017 that storing valuables in the dishwasher during a flood was a bad idea:

It's not a good idea to keep valuables in your dishwasher, said Ralph Feldkamp, the owner of Ralph's Appliance & Air Conditioning Repair in St. Petersburg. Dishwashers don't keep water out.

Feldkamp said if your home is flooded, so will your dishwasher. He said he sees a lot of flooded dishwashers in Shore Acres. The low-lying neighborhood in northeast St. Petersburg is one of the most flood-prone areas in Tampa Bay.

Besides flooding, extreme wind can tear apart the interior of your residence, including appliances.

"If your dishwasher gets ripped then your valuables are going to be floating around the neighborhood," he said.

There's also the possibility that your dishwasher will turn on during the storm, which would not bode well for your valuables.

And in August 2006, New Orleans' Times-Picayune carried a reader-submitted cautionary tale about storing important items in dishwashers during flooding:

Regarding the tip, "Pack your photographs and important things that you can't fit into the car in Ziploc bags and put them all in the dishwasher and lock the door, because it's the only thing that's waterproof in your house": That doesn't work.

I put dishes I wanted to save in my dishwasher. They did not break, but the mud and water in St. Bernard Parish managed to get inside. Photographs stored in a dishwasher would just be little pieces of white paper. Some things I put in Ziploc bags were wet and others were dry. If you put things in Ziploc bags, make sure there are no pinholes in the bag.

The only way to guarantee that pictures will survive is to take them with you. Or scan them into a computer and send copies to several out-of-town friends before you evacuate.

When similar advice appeared on the reddit forum r/LifeProTips, one user responded with another personal anecdote about having lost valuables by trusting them to this approach:

Comment from discussion LPT: If you are in a natural disaster, place your valuables in your dishwasher. It is waterproof.

By contrast, we were unable to locate any stories of people successfully protecting their belongings from flood by storing them in a dishwasher.