The tracks were said to be around 113 million years old. 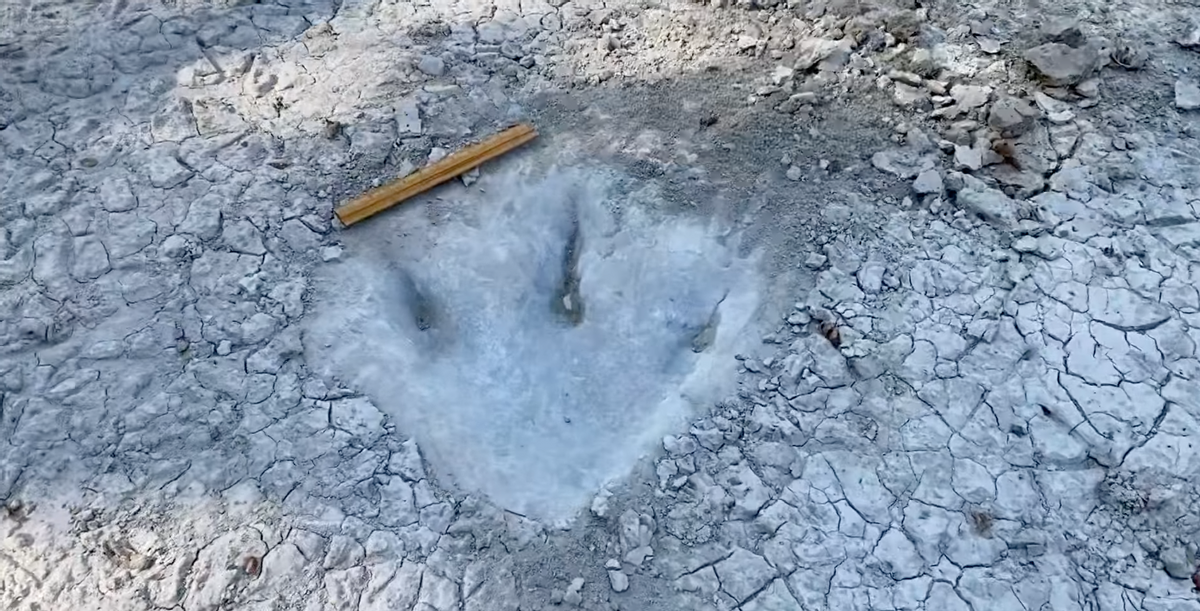 Many of the dinosaur tracks are in the riverbed of the Paluxy River, a Texas waterway that generally stops flowing during the summer months. While many of the tracks are visible every year due to low water conditions, severe drought in 2022 unveiled a new set of tracks seen for what is thought to be the first time.

Low water levels around the world have revealed artifacts previously thought long gone in the history books, from sunken ships in Europe and Chinese Buddhist statues to a barrel containing a body in Nevada and so-called “hunger stones” found in the Czech Republic. In August 2022, a state park in Texas joined the ranks when 113-million-year-old dinosaur tracks imprinted on a riverbed were revealed.

A video posted to Facebook on Aug. 17, 2022, by a nonprofit group that supports Dinosaur Valley State Park in Texas showed “huge dinosaur tracks” in the Paluxy River.

“Normally. These are under water and mud,” wrote the group in a caption accompanying the video.

During the summer months, the Paluxy River normally stops flowing, leaves only isolated pools, notes the park, so revealing dinosaur tracks is not uncommon.

But recent drought conditions in Texas published by the U.S. Drought Monitor showed that as of this writing, nearly the entire state is in some form of drought, affecting more than 22 million people. The tracks publicized widely in 2022 are normally under water throughout the year, park spokesperson Kirk McDonnell told Snopes in an email.

“Due to the excessive drought conditions this past summer, the river dried up completely in most locations, allowing for more tracks to be uncovered here in the park. Under normal river conditions, these newer tracks are under water and are commonly filled in with sediment, making them buried and not as visible,” said McDonnell.

“Park Rangers at Dinosaur Valley State Park do want to point out that the conditions to view the dinosaur tracks depends on how much rain the area receives. With rain in the upcoming forecasts, it is anticipated that the tracks uncovered during the drought will soon be buried again. Tracks being buried under layers of sediment do help protect them from natural weathering and erosion.”

Dinosaurs left tracks in the mud along what used to be an ancient ocean, according to Dinosaur Valley State Park.

“Around 113 million years ago, this area was at the edge of an advancing and retreating sea,” notes the park.

“Calcium carbonate deposits from the shells of crustaceans (crabs, etc.) that lived in the sea formed a limey mud. That mud had the perfect consistency — not too wet, not too stiff — to preserve tracks.”

Then over a century ago, hundreds of theropod tracks were found in the Glen Rose area, a short drive from Fort Worth.

In 1909, a boy named George Adams found “strange three-toed tracks” belonging to a species called theropod in the limestone bed of the river, which experts think may have been revealed during a “mighty flood” the year before. Then in 1937, dinosaur hunter R.T. Bird was collecting fossils for the American Museum of Natural History when he found a “near-perfect trackway of multiple steps of multiple animals, both sauropods and theropods.” Bird’s discovery marked the first ever distinct sauropod tracks found and helped scientists to develop a better understanding of dinosaur habitats and behaviors.

“The majority of Dinosaur Tracks at Dinosaur Valley State Park belong to two different species: a theropod called Acrocanthosaurus and a sauropod called Sauroposeidon. The dinosaur tracks in the park date back to 113 million years ago,” McDonnell told Snopes.

“Most tracks that have recently been uncovered and discovered at different parts of the river in the park belong to Acrocanthosaurus. This was a dinosaur that would stand, as an adult, about 15 feet tall and weight close to seven tons. Sauroposeidon, the other species that left tracks behind, would be about 60 feet tall and weigh about 44 tons as an adult.”

Seasonal rains during the fall and winter will likely cover the tracks once again.