Is This a 'Diesel Car Charging Station' for Electric Cars?

Is this really a "diesel car charging station"? The electric car industry is much larger than a single photograph. 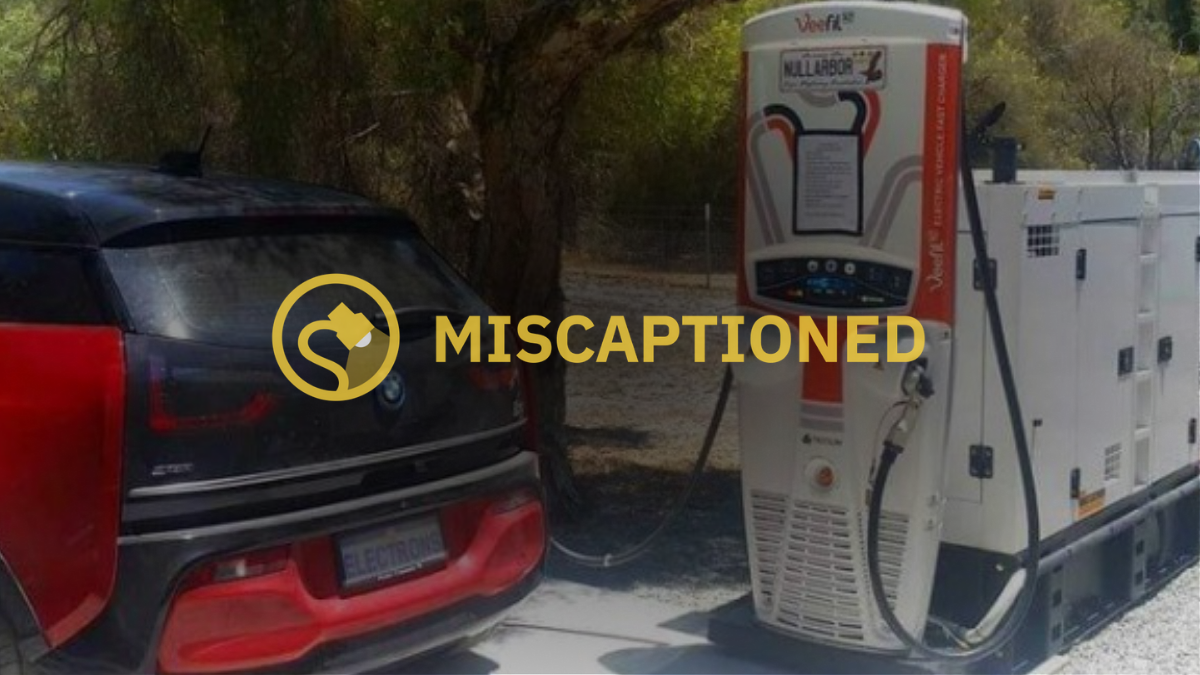 Image Via The Driven

Claim:
A photograph shows an electric car charging at a diesel generator, which uses 36 gallons to provide a 200-mile charge.
Rating:

This photograph shows an electric car charging at a diesel generator in 2018.

This image does not depict a typical circumstance for electric vehicles. The photograph was taken in the Australian outback, not the United States, where gas stations are scarce (and electric charging stations are even scarcer). The picture documents a privately-funded project, not one backed by a major electric car company, and the diesel fuel used provided the equivalent of 42 MPG, not 5.6. By the time of this writing in 2021, the charging station (dubbed the "Chargepod") was running on biodiesel fuel.

A photograph that supposedly shows an electric car inefficiently charging at a station powered by diesel fuel is frequently shared on social media, along with messages denigrating the electric vehicle industry: This photograph does show an electric car charging at a power station fueled by diesel fuel in 2018. However, the accompanying message contains several incorrect or misleading claims.

To start with, the types of stations are not "popping up everywhere." The photograph captures a privately-funded charging station dubbed the "Chargepod" in the Australian outback, an area of the world that does not currently have the infrastructure to support long-distance travel in electric cars, where station was built by retired engineer and electric vehicle owner Jon Edwards as a stopgap until more permanent (and greener) stations could be installed. In other words, this picture is of a one-of-a-kind charging station built to solve a specific problem in a rural area.

We're not sure where the statistics in the accompanying text came from, but they were not the product of Edwards' testing. In 2018, Edwards installed the ChargePod on his property and invited several members of the Tesla Owner’s Club of Western Australia (TOCWA) to come test it. Although the station did not provide a perfectly green solution for supporting electric cars (they were still burning fossil fuels, after all), the results were much better than described in the above-displayed meme.

Edwards and the TOCWA found that this charging station provided about the equivalent of 100 kilometers of travel per 5.6 liters of fuel, a rate approximately equal to 42 miles per gallon. More information about the fuel efficiency of the ChargePod is available here: While Edwards' initial version of the ChargePod used diesel fuel, he has since improved upon his original design by modifying his self-funded station to run on biodiesel (a non-fossil fuel), as the Driven reported:

As we shared in 2018, retired engineer Jon Edwards and a group of EV drivers set up an electric vehicle charger powered by a diesel generator at his property outside Perth to test if charging from diesel was a viable option to take the load off generators at roadhouses that line the long highways across Western Australia’s deserts.

The testing proved that this was actually greener than one might assume.

But Edwards tells The Driven that after being “hammered on social media”, he decided to look into using biodiesel – that is, waste vegetable oil from roadhouse fryers – to power a stand-alone charging solution instead.

“The first version built was a diesel-driven unit named ChargePod, and I put it up in Jurien Bay at the Caltex for a 6 months trial,” says Edwards. “It worked well, the EV drivers loved getting 50kW charging halfway to Geraldton, it but it got hammered on social media.”

Edwards says this was fair enough, and so the Biofil was born.

“The next version was Biofil, same idea but running on waste vegetable oil rather than diesel. While still not entirely ideal, it is renewable energy, not fossil fuel, and it is carbon-neutral,” he says.

This viral photograph truly shows an electric vehicle charging via a diesel fuel generator, but the picture is often shared with misleading or inaccurate claims. This photograph does not depict a common charging station but rather a rather unique charging station which was privately funded as one person's attempt to provide a temporary solution enabling electric vehicles to drive long distances across the sparsely populated Australian outback. The fuel-efficiency of the diesel "Chargepod" was far better than stated in this meme, and the station has since been upgraded to use non-fossil biodiesel.