Did a Young Woman Deliberately Infect 324 Men With HIV? 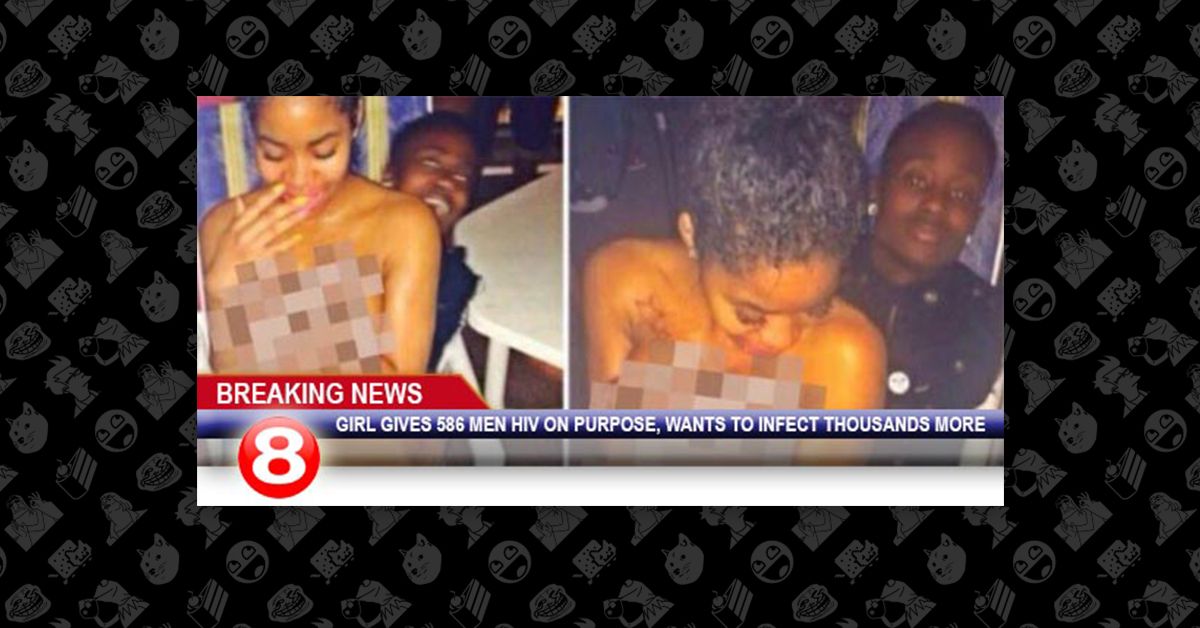 Claim:
A 19-year-old college student in Kenya purposefully infected 324 men with human immunodeficiency virus in an act of revenge.
Rating:

During the 1980s and 1990s, at the height of the HIV and AIDS crises, rumors ran wild about people deliberately spreading the virus to their clueless sexual partners. Although the stigma over HIV has somewhat subsided over the ensuing decades, the rumors about "AIDS Mary" are still alive and well.

A modern version of this urban legend first appeared online in 2014, after the Kenya Daily Post published an article appearing to report that a 19-year-old college student in Kenya had purposefully infected 324 men with human immunodeficiency virus, and that she planned on infecting thousands by the end of the year:

SHOCKER!!!! A University female student confesses to have infected more than 324 men in Nakuru with HIV.... She targets 2000 before the year ends!!!!!!!

Problems in the Original Story

The article was entirely based on a Facebook post that was allegedly posted to a page called "Kenya Scandals, Hidden Controversial Files Exposed." This Facebook page no longer exists, and we were unable to find this post anywhere in any Internet archives. However, the anonymous message driving this story has been preserved by a number of questionable web sites: I'm 19 and a 2nd year student here at Kabarak University. I joined this college a virgin though I have had boyfriends before,my parents are strict so having sex was never on my mind.

Septmber 22nd, 2013, is a day I will never forget,we went clubbing in town and got drunk with some senior students then went back hostels for party around 2am

I remember waking up naked to a guy called Javan with my private part painful and I realised he had sex with me when I was drunk. I only asked if he used a condom and he said yes.

However, when taking bathIi noticed sperms down there,i wanted to commit suicide,i feared getting pregnant and HIV, I took drug and hoped i was HIV free.

In November, I tested HIV positive,I felt like cutting off my neck. I confronted theguy and he insisted he was clean that I got it from somewhere.

I was so depressed and took alcohol to die. I even bought poison,the pain was just unbearable. How was I gonna face the world? I let my parents down. I gave up on the world and just wanted to end my life.

Something came up in my mind that I should revenge. I hated men and I didn’t want to be near anymore. My future had been ruined, somehow someone had to pay.

After a private therapy sessions, I gained strength not even my parents,friends knew of my conditions even up to now.

I accepted my fate and promised to make all men I come across suffer. i know I am attractive and both married and unmarried men chase me left, right and center, luckily, my body has remained good and if anything my curves got better something you men like.

I buried the good girl in me and became the bad girl. My goal was to infect as many as possible. So far, since December up to now, I have infected 324 men and I make sure to note down there list which I secretly keep. I plan to release it when I wiil be on my death bed.

I know I have nothing left to do on earth but to wait for my death but before i do, men will get it.

My target is over 2000 by the end of the year, pregnancy is out of question because I am on contraceptives. So I just do raw which most men here love. They don't even question becauase my looks and body work greatly for me.

Out of the 324 I have infected so far, about 156 are students here at the college, the remaining are married men outside, lecturers,lawyers,some celebs and 3 politicians. Not a day passes without me having sex, mostly four people per day.

This is an unverified story from an anonymous author that was posted to a Facebook page seemingly dedicated to scandals and rumors. The story itself is also rather preposterous. For one, how does this woman know how many people she infected? After all, having unprotected sex with someone who is HIV-positive does not automatically mean that the disease will spread:

A heterosexual person infected with HIV will transmit the virus to their partner once in every 900 times the couple has unprotected sex, according to a new study conducted in Africa.

However, the exact number of sexual acts that are needed to transmit the virus can vary tremendously depending on the amount of the virus in the infected person's blood, said study researcher James Hughes, of the University of Washington in Seattle.

Unless this anonymous woman accompanied her victims to the hospital after every sexual encounter for testing after a set period of time, there's no way she would know how many people she had given HIV.

The web site "Make Kenya Better" took a closer look at some of the more specific claims in the story. Daniel Kibet, who was reportedly in his final year at Kabarak University when this rumor started to circulate, said that the school's strict rules on gender segregation, the relatively small student population, and the fact that this woman was claiming she had more than three sexual partners per day for three months made this story completely implausible:

In her story there are some gaps and misinformation that gave us an impression she was lying about everything.

In Kabarak main campus, men are banned from ladies hostels and if any man is found loitering around the ladies hostels then he or she would be suspended from school.

So the part where she said that they went back to the hostels and had an after party after partying in Nakuru town is All FALSE.

December has 31 days, January has 31 days and February has 28 days. If you add up the days you will end up with 90 days exactly. And the lady said she has infected 324 men from December. Let’s do the math.

If you divide you will get 3.6 that is 3 different dudes per day.

You will ask yourself is she a prostitute or what? How can a university student who has classes and assignments have time to f**k 3 dudes in one day.

There are several other factors that point to this being a fearmongering rumor, as opposed to a genuine story about sexual revenge. For one thing, as this rumor was passed from disreputable web site to spurious blog, the accompanying photograph seemed to change. Many of these outlets claimed that images were culled from this woman's Facebook profile. This is suspicious, however, as the woman's identity was supposedly never revealed. Furthermore, we've seen photographs of least five different women used to spread the hoax:

Another clue that this rumor is based more on fear than facts is that it receives minor updates with each passing year. In addition to changing the photograph, these sites have also altered the number of men reportedly infected with HIV by this woman, as well as her goal date for completing her revenge.

For example, the disreputable blog Now8News rehashed this story, but claimed in their title that the woman had now infected 586 men (not 324) and that she planned on infecting more than 2000 by the end of 2018, not 2014. Interestingly, the body of that article still said that this took place in 2017, which must have been a holdover from the previous year's piece:

Social networks have been buzzing over the past couple of days with the story of a female university student who, over a period of five months, infected 586 men with HIV in “revenge.” The student, whose name has been withheld, claims to have infected married men, lecturers, fellow students and celebrities. According to the report, her aim was to infect 2,000 men with the virus. Her vengeance was met with horror and much criticism over social media.

Her new goal is to infect at least 2,000 men stating, “I know I have nothing left to do on earth but wait for my death.” Surprisingly, she keeps a list of how many men she has slept with so far, and rewarded with HIV. According to her, she already infected 586 men and wanted to finish 2017 with the 2,000 mark.

The claim that a woman in Kenya infected 324 men with human immunodeficiency virus over the span of a few months and that she plans on infecting hundreds more by the end of the year is based entirely on a years-old anonymous Facebook post filled with inaccurate statements, fearmongering rhetoric, and unsubstantiated claims.