Did a Woman Abandon Her Son on the Street to Appease Her Partner?

A video of a woman driving away from her child is real, but the accompanying backstory is nothing more than clickbait fiction. 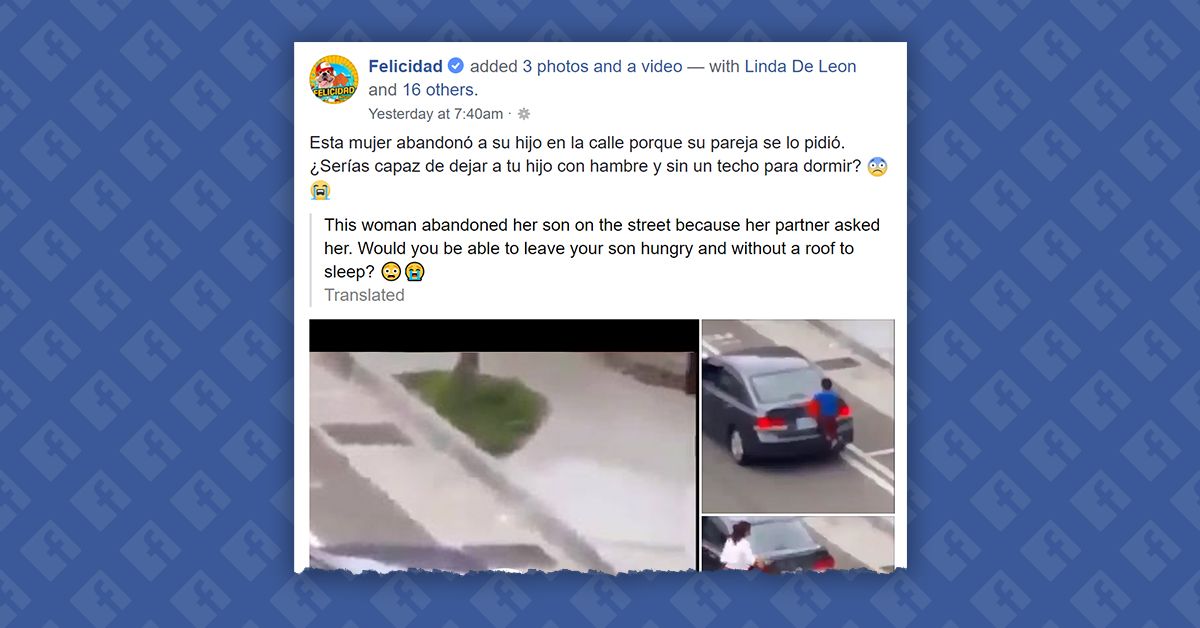 Claim:
A video shows a woman abandoning her son on the side of the road in order to appease her partner.
Rating:

On 22 May 2018, the Facebook page "Felicidad" shared a video which they claimed shows a woman abandoning her son on the side of the road because her partner told her to do so. The post also posed a hypothetical question to viewers, asking them if they would be able to leave their child "hungry and without a roof" over their head in the same situation:

This woman abandoned her son on the street because her partner asked her. Would you be able to leave your son hungry and without a roof to sleep? This video (which can be viewed in full at the bottom of this article) racked up more than 250,000 shares and 22 million views within a day of its initial posting. And although the footage is genuine, its accompanying backstory is not.

This video was taken in the Zhudong Township of Taiwan and originally went viral in early April 2018. However, the woman in the video did not abandon her son to starve and sleep on the street due to her partner's request; she quarreled with her child after he refused to leave a park.

A contemporaneous article published by Chinese-language news outlet United Daily News reported that the woman, identified only by the surname Xiao Xing, was trying to get her three children to leave a park after it started to rain. According to the story, she only "pretended" to drive away and the incident was reported to child services, but it is unclear if the investigation found the parent to be guilty of negligence or abuse.

What is clear, however, is that this child was not left to starve on the street. Police reported that the boy was not physically harmed during the incident and that he was eventually brought home from the park.