Did 'The Simpsons' Predict a Mass Shooting at a 'Black Panther' Movie Screening?

Rumors holding that the show 'The Simpsons' predicted that there would be a mass shooting at a screening of the movie "Black Panther" were based on a doctored image. 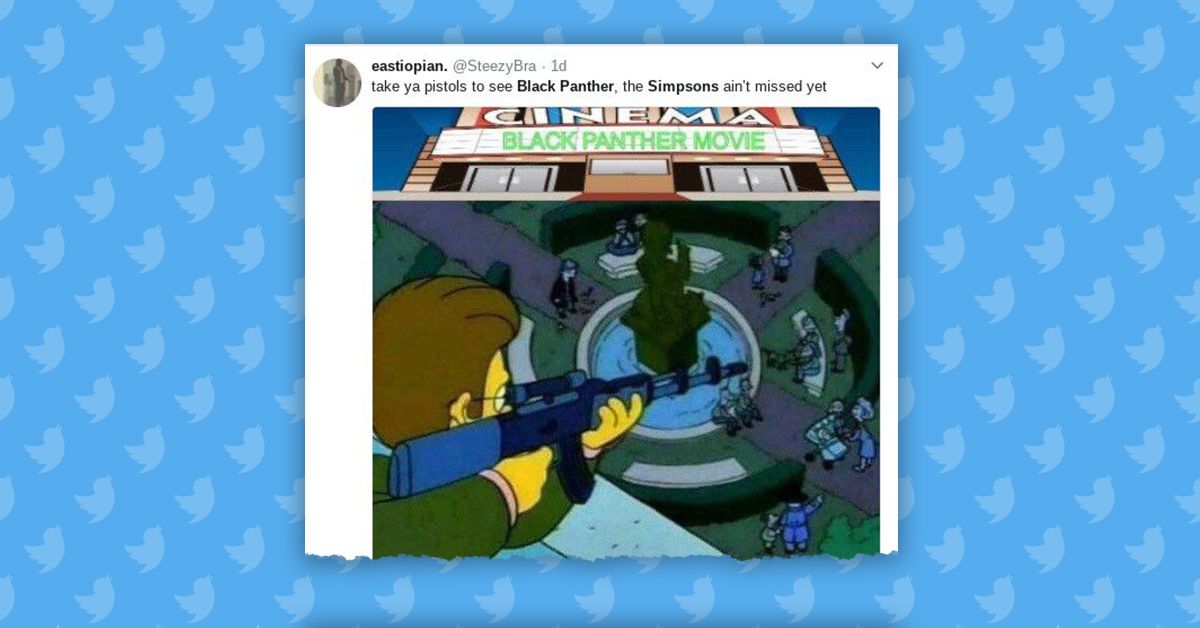 Claim:
"The Simpsons" predicted that there would be a mass shooting at a screening of the movie "Black Panther."
Rating:

Popular animated television show 'The Simpsons' has gained a reputation for "predicting" the future over the years. Although we'd probably classify these predictions as coincidences (and have repeatedly noted that many of these predictions were actually hoaxes or misrepresented in some way), some internet users have come to see the show as some sort of window into the future.

So when rumors started circulating that the long-running show had predicted a mass shooting at a screening of the movie "Black Panther," they were often accompanied by messages warning moviegoers to be careful or to even bring weapons to the theater: This is not a genuine screenshot from The Simpsons.

For one, the geography in this still simply makes no logical sense. The bottom portion of the image features Ned Flanders looking down at a park. The image of the movie theater was shoehorned into this image, cutting off a bush and a field, in a way that simply isn't plausible, even for the cartoon town of Springfield.

The image of Ned Flanders holding a sniper rifle did truly come from an episode of The Simpsons. However, Homer Simpson's neighbor was not targeting moviegoers outside a screening of the movie Black Panther. This clip comes from the episode "Homer Loves Flanders," which aired during the show's 5th season in 1994, and featured Flanders fantasizing about killing Homer during a dream sequence:

This clip appears to be referencing the movie The Deadly Tower which was based off a real-world shooting that took place in 1966 at the University of Texas:

1966 University of Texas Shooting: When Flanders, during a dream sequence, begins to shoot citizens at random from the vantage point of a clock tower, he is mirroring the 1966 actions of real life mass shooter Charles Whitman.

The movie theater portion of the viral image did not originate in The Simpsons. This is merely a piece of clipart that was cropped, distorted, and graffitied with the words "Black Panther": Black Panther earned rave reviews before its premiere on 16 February 2018 and was expected to set a few box office records. Some racist internet users seemed perturbed over the movie's projected success, however, in large part due to the nearly all black cast.

As moviegoers lined up for tickets for the film, internet trolls also started posting violent pictures (from unrelated events) along with fictional stories about how they had been mugged or beaten up at one of the screenings. They urged moviegoers to stay away from the theater or, at the very least, to bring weapons so that they could defend themselves.

Not only is this image purportedly showing Ned Flanders opening fire outside of a screening for Black Panther fake, it is also dangerous, stirring unfounded fears and calling for taking weapons to a movie theater.

We've reported this image to the FBI.