A 2006 episode of the Cartoon Network series received a surge in attention after the talk show host's Golden Globes speech twelve years later. 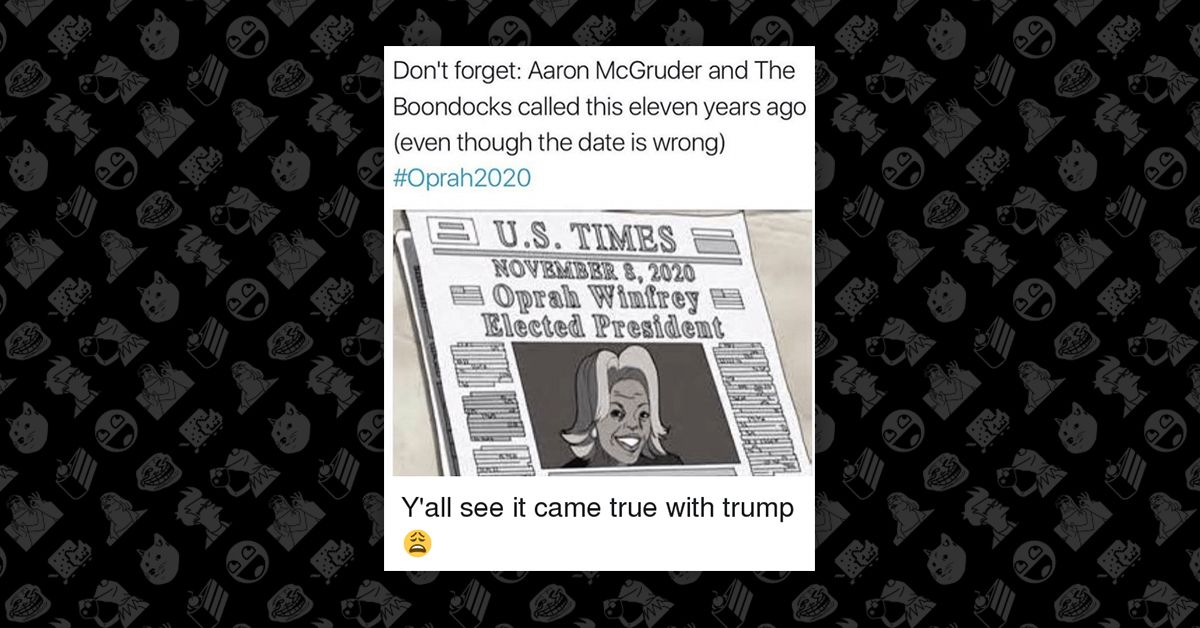 Claim:
Animated series "The Boondocks" had a scene about Oprah Winfrey's becoming president in 2020.
Rating:

Nearly 12 years after it premiered, an episode of the Cartoon Network show The Boondocks received an upswing in attention because of a prediction that closed one of its episodes.

"Return of the King," which first aired on 15 January 2006, ended with a shot of a newspaper headline's reporting that talk show host and entrepreneur Oprah Winfrey had been elected president in 2020. The network's Adult Swim programming block, where the show aired, confirmed on 10 January 2018 that the joke aired:

Winfrey has been the subject of speculation regarding the chances of her mounting an actual presidential bid in the wake of her appearance at the Golden Globe Awards on 7 January 2018. She has reportedly been "actively thinking" about the possibility.

As with forecasts made on another animated program (The Simpsons had an episode called "Bart to the Future," which predicted a Donald Trump presidency; the show accurately made several other predictions, as well), "Return of the King" (written by Boondocks creator Aaron McGruder) does not focus on Winfrey; it dealt with an alternative history in which civil rights icon Martin Luther King Jr. emerged from a coma in 2000 instead of being killed on 4 April 1968. The episode builds to King — frustrated by the political and media climate he is forced to navigate — telling a stunned audience:

I've seen what's around the corner, I've seen what's over the horizon, and I promise you — you n**gas won't have nothing to celebrate. And no, I won't get there with you. I'm going to Canada.

After King leaves the stage, the show's central character Huey Freeman then narrates the fallout of his remarks off-camera. He says:

King's speech was replayed the entire next day on cable news channels. Then something unexpected happened: people got angry.

A montage of newscasters then spells out the consequences of the speech: an "unexplained" decline in African-American student dropouts; a National Basketball Association players' strike demanding that U.S. troops are pulled out of an unidentified country; an apology by Black Network Television founder Robert Johnson to black Americans; a surge in "irate" phone calls to lawmakers' offices by African-Americans; and a large protest outside the White House that is then repelled by tear gas.

The sequence is followed by a close-up on a newspaper headline stating that King died in the Canadian city of Vancouver, before the camera pans up to the top story announcing Winfrey's electoral victory, strongly implying that it was the culmination of the anger set off by his speech. As the episode ends, Huey can be heard saying, "It's fun to dream."

McGruder is currently producing a new show, Black America, for Amazon Studios. We contacted both Amazon and Cartoon Network seeking comment on the renewed interest in the episode generated by the reaction to Winfrey's speech.

Eller, Claudia. "Oprah Should Run for President — Even if Only to Spite Trump (Opinion)." Variety. 10 January 2018.